Wolves Walk into a Trap.

Share All sharing options for: Wolves Walk into a Trap. 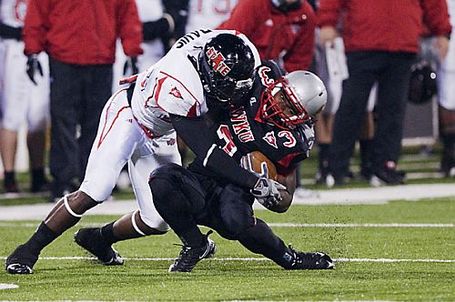 Can DeMario Davis make the stop against Auburn?

War Eagle, everybody! It's time now to start previewing Auburn's 2010 football opponents. On Saturday, September 4th, the Tigers open up the season with the Arkansas State Red Wolves, in Auburn. The time is still up in the air, but expect a night game. That's been the pattern with Auburn in the last decade. It's a tough situation for the Wolves. They'll face a pretty veteran Auburn team in the season opener, and there are a lot of questions on the Arkansas State roster.

Last year, the Red Wolves were expected to compete for the Sun Belt title, but instead suffered a rash of injuries, and finished with 4 wins and 8 losses. Probably their best win was a 27-10 decision at home against Florida International. Arkansas State has had 22 surgeries to players in the past year, and many of those were probable starters who weren't able to go through spring drills. Coming out of camp, the Wolves are still looking for a starting quarterback, running back, kicker, and punter. In general, Arkansas State is looking for a lot of help from incoming freshmen in the skill positions, as 13 of the 26 players they signed in February are slated for roles at quarterback, wide receiver, running back, and secondary.

A spread offense has been installed at Arkansas State, by new offensive coordinator Hugh Freeze. SEC fans last saw Freeze as an SEC assistant under Ed Orgeron at Ole Miss. Freeze was briefly the interim head coach at Ole Miss, after Orgeron was let go. Freeze believes in the no-huddle, and is hoping that he'll have it all ready to go by the opener at Auburn. He'll have the nucleus of an offense that racked up 21 rushing TDs, but only 10 through the air in 2009. By comparison, Auburn scored 24 TDs on the ground, and 25 through the air against decidedly better competition.

On defense, the Red Wolves lose star defensive end Alex Carrington to the NFL, but their top four tacklers return on a defense that allowed 23.2 points per game. Arkansas State has relied on a scrappy defense for most of the past decade, and that will likely be the case in 2010 as well.

Special teams are a huge question for Arkansas State. They'll field new punters, kickers, and return men on September 4th at Auburn, and none have played in the shadow of 80,000 plus fans.

Unit match-ups after the jump!

Auburn defensive line vs. Arkansas State offensive line: Arkansas State returns 4 players with starting experience on the line, led this spring by senior guard Drew Hilton and JUCO transfer Derek Newton. While Auburn has questions on the defensive line for 2010, the Tigers will have athletic advantages at every position in this matchup. Look for a lot of quick throws and outside runs by the Wolves, to try and counter Auburn's speed and power. Big Advantage: Auburn.

Auburn linebackers vs. Arkansas State runners: The Wolves are looking to 230 pound junior Jermaine Robertson to carry the load in 2010, along with junior Derek Lawson. Those two combined for 305 rushing yards in 2009. Expect the veteran trio of Craig Stevens, Josh Bynes and Jonathan Evans to shut down the run against the Wolves. Advantage: Auburn.

Auburn corners vs. Arkansas State outside receivers: The Wolves were not a prolific passing team in 2009, and they lose their top receiver and starting quarterback. It's widely expected that JUCO transfer Dwayne Frampton will start at one receiver spot. It will be a patchwork of new faces for Arkansas State, and they will try to operate against veteran Auburn defenders Demond Washington, Neiko Thorpe and T'Sharvan Bell. Advantage: Auburn.

Auburn safeties vs. Arkansas State secondary receivers and quarterback: It's not clear who will actually be playing at safety for the Tigers in the season opener. Auburn has at least 4 safeties with great experience on the roster, but last year's phenom (Darren Bates) has been at least temporarily moved to linebacker, and the other three are still nursing serious injuries. It could be veteran guys, or it could be walk-ons Drew Cole and Ikeem Means starting. It's hard to say at this juncture. Arkansas State has few players that have caught a college pass returning inside, the most notable of which is sophomore tight end Murray Kedric, who had 7 receptions a year ago. The candidates to start at quarterback are redshirt freshman Phillip Butterfield and sophomore Ryan Aplin. Aplin has three career starts, but was out for the spring with shoulder surgery. Butterfield had decent stats in the State spring game, hitting 30 of 54 passes for 235 yards and 3 TDs. Those numbers suggest a controlled short passing game, the kind that Auburn has had great difficulty in recent years shutting down. There is a lot of inexperience factoring into the Wolf side of the equation. Assuming even one Auburn veteran returns at safety in time for the opener, it's Advantage: Auburn.

Punting: Auburn returns 5th year senior Ryan Shoemaker, who was freshman All-SEC in 2007. Shoemaker had a solid spring, but was inconsistent on A-Day. Junior reserve quarterback Neely Sullivent is the leader for the Arkansas State punting job. The Wolves are still searching for a return man, as are the Tigers. Auburn was dismal a year ago returning punts (4.5 yards per return with numerous drops), and not much better covering punts (12.9 yards per return for opponents). Arkansas State gave up only 4.7 yards per return. Advantage: Even. There are too many unknowns at this point.

Kickoffs: Auburn has been consistently managing the 8 yard line on kickoffs with Wes Byrum this spring. Arkansas State is trying out new kickers, and it's doubtful that any will manage that distance in game one. Auburn gave up 23.5 yards per return, Arkansas State gave up only 18.2. Auburn has a number of veteran return men who've averaged over 20 yards per return, including Demond Washington, Mario Fannin, and Onterrio McCalebb. Slight Advantage: Auburn.

Placekicking: Auburn returns senior Wes Byrum, who's coming off a near-perfect year. I'd go with the consistent, veteran senior every time against a newcomer at Arkansas State. Sophomore Brandon Parker is the likely Red Wolf kicker. Advantage: Auburn.

Auburn offensive line vs. Arkansas State defensive line: Auburn returns a line with 4 seniors who've started a LOT of games in the SEC, and will be rounded out with a top JUCO tackle on the right side. Arkansas State will come in with two new starters at defensive end. A first game assignment against Auburn's tricky, pulling-trapping offense with veteran starters will be a tall order for the Red Wolves. Big Advantage: Auburn.

Auburn backs vs. Arkansas State linebackers: Auburn's starting backfield of Mario Fannin and Eric Smith will be formidable. Both have good size, speed, and strength, not to mention experience. There is a lot of talent behind the starters, too. The Red Wolves' best tacklers are in the linebacking corps, and they'll get after it. Junior DeMario Davis had 80 tackles a year ago, and senior Jevon McKinnon had 53 in 8 games. Advantage: Auburn.

Auburn receivers vs. Arkansas State corners: No one could cover Auburn's Darvin Adams a year ago, and the Tigers appear to be much deeper and more dangerous at wide receiver this year after spring drills. Senior cornerback Walter Moody is solid for the Wolves, but he's going to be on an island a lot against a rotating Auburn cast. Advantage: Auburn.

Auburn secondary receivers and QB vs. Arkansas State safeties: Auburn at the very least is capable at secondary receiver, with Eric Smith and Phillip Lutzenchirchen. At best, we'll be seeing wide receivers in the slot like DeAngelo Benton and Quindarious Carr, both of whom pulled off spectacular plays in the Auburn A-Day game. Auburn is loaded at quarterback as well, with 4 talented players. Starter Cameron Newton will be a threat both with his arm and with his legs. Junior Kelcie McCray returns at safety for the Wolves, after recording 58 tackles a year ago. He leads the secondary, but he's only listed at 190 pounds. It's not a good matchup against the heavies Auburn can put on the corner, like Terrell Zachary, Mario Fannin, Cameron Newton, etc... Advantage Auburn.

After reviewing the matchups, there's not a single area where Arkansas State is clearly superior. With Auburn fielding a core of veterans in Gene Chizik's system, and Arkansas State coming off a year of record injuries and installing new systems, expect a pretty lopsided game. Auburn will likely go deep into the depth chart, which will allow the Red Wolves to score some trash-time TDs, but Auburn's offense should be able to move at will, and should score a lot of points. Considering how offensive coordinator Gus Malzhan keeps the hammer down, I'd not be surprised to see 70 in this one for the Tigers. On the other hand, it could be a lackluster close-to-the-vest day. I think there's too much skill on the Auburn offense to keep it below 50, in any event. We will learn most from this matchup by watching special teams. If we're still dropping punts and not covering kicks, it will be time to worry.

Prediction: Arkansas State will return to the ranks of winning teams in 2010, just not against Auburn. The Red Wolves are entirely too young to stay on the field with a veteran Auburn team. Auburn explodes in game one, 67-24.