From Champ to Chump?

Share All sharing options for: From Champ to Chump? 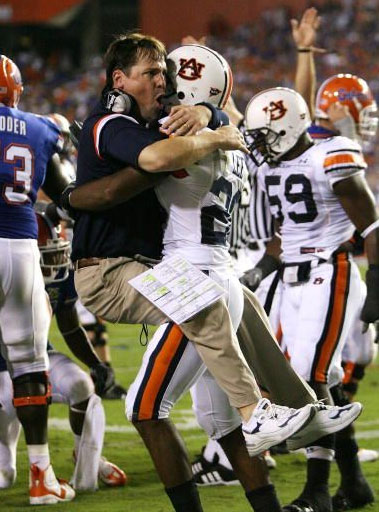 I don't wanna get carried away, but...

Jay's mention yesterday of the curious case of Will Muschamp possibly being the Horns' understudy in Austin for a bit longer than he originally bargained for got me thinking about a host of things--including his prime point of the whole coach-in-waiting, coach-on-deck concept. While Jay doesn't like the idea, I think that in the right situation, it can help bridge the gap for a successful transition--provided it's done quickly and you don't have an Al Haig situation arise. Recruits and your fan base need to know who the successor will be immediately, even if a retirement is announced in good time, and truth be told, most would prefer an orderly line of succession as opposed to the chaos of the great coaching hunt in a bear market.

But the potential to botch such an undertaking is tremendous--witness the example of FSU and Bobby Bowden. Can't empathize with the Noles? Imagine that Tubs had taken Chizik in as a successor back in the 2006 season, but still got shoved out the door after the Alabama loss in 2008. Would Mean Gene have an easier go at it than the situation that he did walk into, or would it have been worse? I'm thinking the latter situation. Half the fan base that even approved of the firing would still view Chizik as a possible Brutus, with his long knife drawn. That kind of division could take years to mend, even with all the right moves that we now know Chizik can make. And that's not factoring in the freedom that comes with a wholesale house cleaning. Inheriting a program may come with pressure to keep certain members of the coaching staff on board for political reasons--and the new staff may not gel as quickly. Let's see how many members of Jimbo Fisher's staff remain for the 2011 or 2012 season.

So back to Muschamp. The current anointed one. The hottest assistant in the country. The hottest head coaching prospect in the country. Or is he? What's he waiting on?  This is a business based in large part on hype, and if you look up depreciating asset in the dictionary, it says, see HYPE. Could  this be a failure to launch scenario? 2008--Auburn offers him a job in the $3M range--turned down, but understandably so, given his intimate knowledge of the dysfunction under Bobby Lowder and the pressures applied to his former boss on the Plains. In 2009, the SEC went into December looking like it would have zero coaching turnover, but ended up with the Kiffin surprise. Tennessee offered Muschamp the job, and he declined. Knoxville is the historical #2 team in the conference and a top 10 program in the nation. If you don't jump on a job like that, what exactly do you think is coming around the bend?

But maybe we're selling young Muschamp short. So many SECers think his place is in the conference, but perhaps it's not. Maybe he simply intends to honor his current agreement and remain the coach-in-waiting for Texas and the highest-paid assistant in the country. Seems sort of strange these days, though. Someone in a high-profile profession like this sticks to their word. Stranger things do happen--the whole aforementioned Lane Kitten nightmare, for one. But apparently, the wait might get a little bit longer in Austin, so what's plan B? Damn. That Tennessee job sure is looking good now if there's a logjam at DKR Stadium. See, at some point, you burn up all your political capital and go from being the next best thing to simply being a prude. So many have asked, yet you've never agreed. Eventually you're all dressed up with nowhere to go.

Carpe diem! You don't get to walk this way again, especially with more and more of the upper crust of BCS conferences eschewing the hiring of hot prospect assistants and going with someone who has proven his mettle as the head guy--even if it is at a mid-major school. Let's look at Alabama, LSU, Florida, Tennessee, Georgia and us the last decade or so. Only one of those group hired a top assistant that worked out and that was Georgia. Mark Richt came from FSU and made an immediate impact. Alabama hired Shula, an assistant in the NFL, and most Tide fans would agree that was an unmitigated disaster. Florida hired Zook and took a break from winning conference championships for four years. Auburn would have bucked conventional wisdom by wanting to hire Muschamp, but couldn't. Do many Tiger fans think that breaking him in would have been the right decision for us? Tough to say. Granted, on the other hand, with only two years in Ames, Iowa, most would agree that Chizik was probably a little wet around the ears, too.

But hiring someone with HC experience is by no means a lock. At LSU, Saban came from mediocre success at Michigan State before taking over the reigns, and Les Miles came from same at Oklahoma State. Both won MNCs in Baton Rouge. Alabama hired a proven college winner in Saban after struggling with Dennis Franchione out of TCU and Mike Price out of Washington State. Georgia struggled under Jim Donnan from Marshall but Florida took an upstart Urban Meyer from Utah and Auburn borrowed Tubs from Ole Miss. Tennessee has now hired Derek Dooley from Louisiana Tech, but opted for the hot assistant with Muschamp to no avail. So okay, maybe the concept's not totally dead, but they better be on-fire hot.

But maybe Will Muschamp has more patience than Jobe and the steely resolve of a sniper and is waiting for his opportunity to arise. Last year, we saw serious chinks in Mark Richt's armor for the first time and not even DC Willie Martinez's head on a pike can quell all Dawg fans for long, especially if things turn sour again this fall. If Richt were to become vulnerable later in the upcoming season, would Georgia be tempted to make a move? I can't imagine a scenario yet where Richt would be fired outright, so inroads would have to be made to Muschamp, whom I'm sure still maintains close Bulldog ties. That fact would certainly make it easier on them than possibly having their own version of Jetgate, but the answer must be known before the question is formally asked and the head made to roll. Are Dawg fans bullish on Muschamp, or are they really not that into him? Makes you also wonder if Gator fans will ever be interested in Chizik, but I digress.

If such an offer is made and accepted, it'll either be the swiftest move ever by a HC or the luckiest CFB happenstance since Ronald Regan played the Gipper. One thing is certain, though. It'll restore the old anachronistic concept of an alumnus coach in the SEC. 2009 was the first season in my lifetime that there wasn't a HC storming the very sidelines that he used to sit on as a player and that's kinda sad if you think about it.