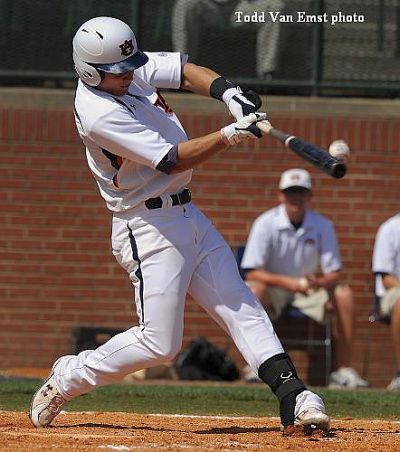 War Eagle, everybody! It's a fine time to be an Auburn Tiger. Things are trending upwards in nearly every Auburn sport. The football appears poised to contend for the SEC title, Auburn has recruited several highly regarded in-state players, and the baseball team will win the SEC West title if it can take 2 of 3 from Ole Miss this weekend.

In Auburn football news, it appears that nearly all of the highly rated 2010 Auburn signing class will make it to Auburn for fall camp. The Tigers need help in the depth department badly, and a full class of incoming star players can only be a boon. Auburn's "bust" rate over the past half-decade has averaged about 40 percent. Let's hope that this year's academic success is trend, not an anomaly.

It was tough to hear about sportscaster Mike Raita of Birmingham's ABC33-40 going on hiatus for cancer treatments. Raita is probably most famous among Auburn fans for coining the nickname "Cadillac" Williams about a decade ago. He's also arguably the best TV news sportscaster the area has ever seen. Raita always has fun on the broadcast, but he can be intense when needed, too. I'll always remember how he got in Dennis Franchoine's face after the former Bama coach defected to Texas A&M. Get well soon, Mike!

It's now official, Tyrik Rollinson is no longer a member of the Auburn Tiger football team. Evidently the young man did stick it out through the semester, and has his grades in good enough shape to transfer. We wish Tyrik well, and hope he finds success at Sam Houston State. I think more than anything, he was on the bad end of the numbers game at Auburn. As A-Day showed, Auburn is fairly deep in good quarterbacks.

Reports earlier this month of imminent Big Ten Conference expansion appear to have been premature. The Chicago Tribune reports that expansion is not on the agenda of the Big Ten meetings this week. I'm still of the opinion that the entire scenario has been engineered to put pressure on Notre Dame to join the conference. Otherwise, I don't see the league watering down their new-found TV money by adding four more teams that share in the revenue. Ain't gonna happen.

It's been fun following the Auburn baseball team this season. The Tigers can win the division in Oxford this weekend. It's been quite a turnaround. Last year, Auburn didn't even make the SEC tournament. They could very well go from worst to first in just one season. The only thing that worries me is that the Tigers struggled in a loss to South Alabama last week, and a narrow win this week over Jacksonville State. Those Tiger bats need to keep popping throughout the month of May!