Big Ben Is Back On Top Again

Share All sharing options for: Big Ben Is Back On Top Again 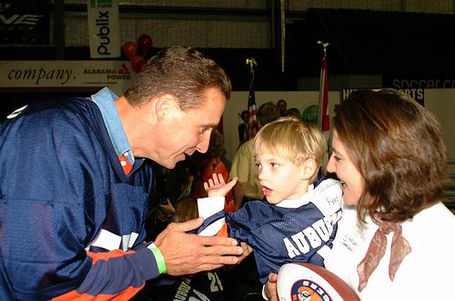 He was a 17 year old undersized center his senior year at Shades Valley High School in Birmingham. Maybe that's why no colleges were interested in signing him. At 6'2" 210lbs, Ben was not a small kid ... if Ben were a wide receiver. But Ben was not a wide receiver, he was a center. Although he had a good high school career, Ben was not an attractive prospect for the college scouts. In fact, if all the scouting services that we have in today's world were active in 1982, one would not be able to find BenTamburello's name on any of their websites. But this past Saturday, Ben Tamburello was enshrined into the Alabama Sports Hall of Fame, in ceremonies in his hometown of Birmingham. He topped a class of 10 greats from the state of Alabama.

When Ben finished high school, Robert Higginbotham, his coach urged him to enroll in Tennessee Military Institute to give him another year to mature. Ben said that the extra year gave him time to grow, mature, and put on weight. It probably also helped that TMI played quality junior varsity teams such as Tennessee, Notre Dame, South Carolina, and Georgia. The move paid big dividends. The little 17 year old kid that no body wanted had grown into a 6'3', 258lb. lineman that could litteraly dominate the opposition.

Now it seemed everybody was interested in Ben Tamburello. Tennessee's legendary player Johnny Majors was now coaching the Vols and he wanted Ben, Jerry Stoval at LSU was recruiting him hard, and Kentucky had made a firm offer. But when Ben's childhood idol Bear Bryant came calling, it seemed like the writing was on the wall ... Ben Tamburello would wear crimson and play for "the Bear."

However, something happened to change his future. There was a second year coach at Auburn that had already proven he would not shy away from recruiting any player, any where. Case in point, Vincent Bo Jackson from nearby Bessemer was already a Tiger. Ben said that when he took his official visit to Auburn, that he found Coach Pat Dye to be "an impressive guy". He said it was exciting how Coach Dye sold the Auburn program. "Coach Dye was a terrific recruiter, the kind of guy you wanted to play for. You just connected with him."

There were two things that sealed the deal for Ben: one was when he visited Auburn (even though it was the week before the Iron Bowl) Coach Dye spent a lot of time with him and more importantly he spent a lot of time with his parents. The other thing was the family type relationship the players had with each other. He came away saying that he saw "Auburn was a real special place." Sounds a lot like what's been happening on the Plains this past year, doesn't it? Coach Gene Chizik says "recruiting is about relationships". Well in 1982 that's what turned a lifelong Crimson Tide fan into an Auburn Tiger.

In addition Big Ben garnered the following honors: SEC All Academic Team, 1986 Team Captain, finalist for Outland and Lombardi Trophies as the nation's top lineman, named the SEC Lineman of the Year his senior year by the Atlanta Touchdown Club, named the Offensive Player of the Decade by the Birmingham News, played five years for the NFL's Philadelphia Eagles, and named to Auburn's All Century Team in 1992. How can anyone not be wowed by that list of accomplishments?

Ben says he would not change a thing about his Auburn experience. He said it was the best decision he ever made. "Auburn is a special place. I met my wife there. I played with some great players like Bo Jackson, Tracy Rocker, Jeff Burger, Brent Fulwood, ... (and) I would never trade the experience I had to play for Coach Dye."

When Pat Dye was asked about his former player, he responded in true Dye fashion, "(Ben) had the mentality. He was tough, talented, quick, and a great leader. Everything you'd want in an offensive lineman, especially a center. But I'm more proud of the man and the daddy he's become."

The Auburn family is proud of you too Ben. It's good to see you back on top of the sports world again. Your one deserving Tiger. Congratulations!