Share All sharing options for: Thursday Night Shoot out! 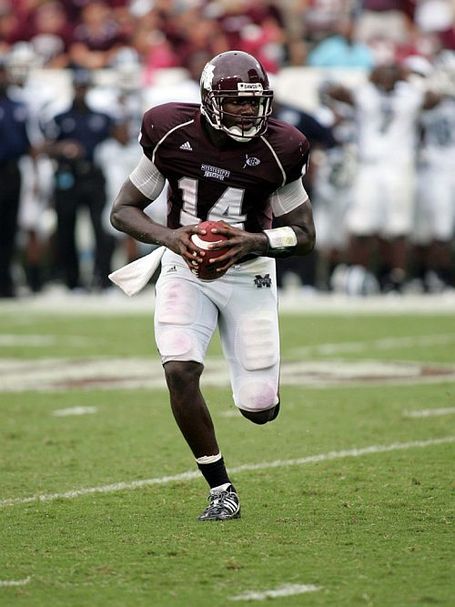 Bulldog Chris Relf can move the ball with both his legs and his arm!

War Eagle, everybody! On September 5th, Auburn heads to Starkville, Mississippi for a Thursday night rumble with the Mississippi State Bulldogs. It's a short week for the Tigers, after their opener with Arkansas State. The Bulldogs likely will have been better tested prior to this game. They open with Memphis, a team that usually plays the SEC tough in season openers. The 2010 Bulldogs look to return to postseason play, with a saltier defense and a less nasty schedule than a year ago.

Last season on offense, the Bulldogs managed to score 21 or more points on every SEC opponent except for Florida and Alabama. The Bulldogs did that despite finishing in the bottom three in passing yards. What carried the Bulldogs was the league-leading rushing attack. This year, Anthony Dixon is gone to the NFL, but Mississippi State should still be productive running the ball with its spread-option attack. If the spring game was any indication, expect the Bulldogs to platoon players at most of the skill positions. Veteran option specialist Chris Relf returns at quarterback, but the plan is for Relf to split time with redshirt freshman Tyler Russell, and possibly signee Dylan Farve who arrives this fall. Yes, Dylan is the son of Brett Farve.

Last year defense was the biggest Bulldog weakness, as the unit finished 10th in the SEC in total defense and 11th in scoring defense. Defensive coordinator Carl Torbush left for Kansas at the end of the season, and he'll be replaced by Middle Tennessee's Manny Diaz. SEC ball will likely be an adjustment for Diaz, but he has a pretty salty bunch of players back for this season. The only significant loss to graduation was linebacker Jamar Chaney. The Bulldog D-line looks particularly good, led by monster defensive end Pernell McPhee.

The Bulldogs will benefit on special teams by returning all of their kickers and most of the personnel from last year's special teams squad. The Bulldogs were pretty good on returns and place-kicking, average on punting and kicking distance, and suspect in coverage. Particularly troubling was punt coverage, where MSU gave up 13 yards per return.

Auburn defensive line vs. MSU offensive line: Auburn returns a veteran, if thin defensive line. Tiger speed will give MSU problems on the line. The MSU offensive line has good size and experience, but struggled this past spring against a dangerous D-line. Every starter lists at 300 pounds or more. Senior left tackle Derek Sherrod anchors the line, along with junior right tackle Addison Lawrence. Junior Quinton Saulsberry and sophomore Tobias Smith will start at guard, and senior center J. C. Brignone rounds out the line. It's incumbent on the Tigers to play assignment football against the spread-option, and Auburn's veteran lineup should be equal to the task. Slight Advantage: Auburn.

Auburn linebackers vs. MSU backs: Auburn's starting trio of linebackers Craig Stevens, Josh Bynes and Jonathan Evans will be solid, and they'll be taking on a relatively new Bulldog backfield. It's a mistake to write off the new Bulldog players, though. Junior Robert Elliot and JUCO transfer Vick Ballard are listed as co-starters. Elliot is a highly touted player that has been held back due to injury for most of his career. He'll be dangerous in an early season game. The Bulldogs have some options in the depth chart as well, including 225 pound redshirt freshman battering ram Montrell Conner. Senior fullback Patrick Hanrahan has good size and experience. Another challenge facing the Tiger 'backers is quarterback Chris Relf, who rushed for 500 yards last season while only playing part-time. He's probably the most savvy option quarterback in the SEC. Advantage: Even.

Auburn corners vs. MSU receivers: Auburn has 3 capable corners in Demond Washington, Neiko Thorpe and T'Sharvan Bell. The Bulldogs were very green at receiver last season, but return three of their top four guys in this spot. Sophomore Chad Bumphis is dangerous, both as a receiver and as the pitch-man on the option. Leon Berry has experience as well. A full year of tutelage in the Mullen offensive system should help this group, but aside from Bumphis, Auburn has more talent in this matchup. Advantage: Auburn.

Auburn safeties vs. MSU secondary receivers and quarterback: All preseason, we'll likely be guessing on this matchup, depending on the health of Auburn's front-line guys. A safety corps featuring a healthy Aaron Savage, Zach Etheridge and Mike McNeil might be among the league's best. A starting lineup of Drew Cole and Akeem Means will be vulnerable. The most prolific secondary receiver last season for the Bulldogs was tight end Marcus Green with 27 catches, and he returns for his junior season. Beyond that, the Bulldog underneath passing consisted mostly of swing passes to running backs. Junior quarterback Chris Relf is known more for his option running than his passing, but it's important to note that he was a 53 percent passer, averaging 6.9 yards per pass with five TDs and 3 interceptions. That's pretty impressive considering how inexperienced last year's receivers were. I had a chance to watch a good bit of the MSU spring game, and Relf looked pretty good. Redshirt freshman quarterback Tyler Russell will be a work in progress. He has a nice arm, but seemed to force the ball quite a bit. Unless Relf REALLY needs a breather, the Bulldogs would be better served to keep Relf in the game. Advantage: Even.

Punting: The Auburn heir apparent at punter is senior Ryan Shoemaker, who was a freshman All-SEC in 2007. Shoemaker has been erratic, but he does have a good leg, as evidenced by his career 41.5 yard average. Mississippi State returns junior Heath Hutchins, who averaged 39.7 per game last season. Auburn fielded a rotating cast of return men last season who finished last in the league in yardage(2.5 yards per return), and first place by a wide margin in dropping the punt on the ground. Quindarious Carr had a good spring here, and made it through A-day without dropping a kick. Leon Berry and Chad Bumphis returned punts for MSU last year, and averaged a pedestrian 8.1 yards per return. Both teams were suspect in coverage. Auburn gave up 12.9 yards per return, MSU gave up 13.3. Auburn has a lot of unknowns at this point, MSU seems to be set. Advantage: MSU.

Kickoffs: Kickoffs were a sore subject for Auburn last year, with the Tigers only managing only a 40.5 yard net kickoff. MSU was slightly worse, posting 39.6. Auburn kicked five out of bounds to MSU's two. Kickoff specialist Morgan Hull departs for the Tigers, and will be replaced by senior Wes Byrum, who has a career kickoff average of 62.4 yards. MSU used a tag-team of Derek DePasuale and Sean Brauchle, who averaged a combined 59.8 yards. Auburn boasts several veteran return men, and averaged 23.7 yards per return while giving up 23.5. Mississippi State used Leon Berry and Chad Bumphis who combined to average 25.9 yards per return. MSU gave up 22 yards per return. Slight Advantage: MSU.

Auburn offensive line vs. MSU defensive line: This is a strength vs. strength matchup that may well decide the ball game. Auburn has a veteran line featuring likely post-season honorees Lee Ziemba and Ryan Pugh. MSU's strength starts with big senior end Pernell McPhee, who lists at 285 pounds. The other end is Nick Bell, a 265 pound sophomore. Sophomores Josh Boyd and Fletcher Cox give the Bulldogs beef inside. Auburn took serious advantage of this group last fall, but it will be a more experienced bunch of Bulldogs this time around. Still, I believe Ziemba will be able to handle McPhee, and Auburn will handle this battle. Advantage: Auburn.

Auburn backs vs. MSU linebackers: Auburn should have a talented trio of runners for this game, led by senior Mario Fannin. Junior H-back Eric Smith will open holes. The Bulldogs counter with seniors K. J. Wright and Chris White, who should be good. Sophomore Cameron Lawrence fills the third linebacker spot. Strategy should be interesting in this matchup. Gus Malzhan's unusual offense had a lot of early success against attacking/blitzing defenses. This forced coordinators to adopt a stay-back, read and react philosophy to slow things down. New Bulldog coordinator Manny Diaz LOVED to blitz at MTSU. Will the Bulldogs try to blitz against Auburn? Carl Torbush's blitz package failed spectacularly last season, as Auburn romped for 390 rushing yards on this bunch. Advantage: Auburn.

Auburn receivers vs. MSU corners: The deepest position on Auburn's 2010 squad appears to be at receiver, led by star junior Darvin Adams. If there's a knock on the starting MSU corners, it might be that both are a bit undersized at 5' 10". However, sophomore Corey Broomfield was a freshman all-SEC last fall, with 6 interceptions and 4 pass breakups. The matchup between Broomfield and Adams will be interesting. Where Auburn will try to go to work is on the other side. Senior Maurice Langston played in 10 games last season, and had no pass breakups and no interceptions. Advantage: Auburn.

Auburn secondary receivers and quarterback vs. MSU safeties: Auburn should have a number of talented secondary receivers, including sophomore tight end Phillip Lutzenchirchen. The Tigers often line up outside receivers in the slot, and throw a lot of passes to backs out of the backfield. There are at least a half-dozen such candidates who can break a screen pass the distance. In addition, quarterback Cameron Newton has a strong arm, and is a threat as a runner. Newton outweighs one MSU safety by 40 pounds, and the other by 60. There's a lot of Tiger weapons for a safety corps to handle. MSU is capable here, returning junior Charles Mitchell and sophomore Jonathan Banks, who was freshman All-SEC last fall. Mitchell was 4th on the team in tackles, and Banks was 8th. Each safety had 4 interceptions. Mitchell had two pass breakups, and Banks had three. There's depth in the MSU secondary as well, as junior Wade Bonner came off the bench to make 20 tackles last year.

With an early evening cowbell-armed Starkville crowd, expect a closer game this year. MSU will try to option their way down the field and move the chains. We'll find out early next fall if Auburn's defensive depth has improved. The Tigers should be able to move the ball pretty well, despite the improved Bulldog front seven. There are some mismatches on the edge, and offensive coordinator Gus Malzhan will exploit them. The big question in this game will be Auburn's Cameron Newton getting his first SEC start at quarterback, and on the road at that. If he can take care of the ball, I suspect that Auburn will be too much for the Bulldogs. Against a hostile crowd, a few fumbles and interceptions could snowball things the other way. Newton seemed to avoid turnovers for most of this spring, so I'm cautiously optimistic.