Share All sharing options for: Hammer Dropped on USC 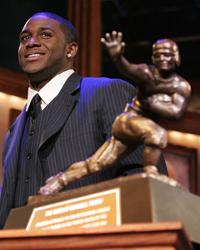 Quite the day in CFB this Thursday.Not only all the conference defections, but USC's long awaited penalties from the Pete Carroll era are finally in: A 2-year ban on post season games, the loss of 30 scholarships and the vacation of all victories in which an ineligible player (Reggie Bush) participated. Bush has been ruled to have been ineligible at least as of December 2004, which would vacate the BCS title game victory in the Orange Bowl over Oklahoma in January 2005. That could possibly trigger vacating his Heisman Trophy for the 2005 season. The Heisman Trophy Trust has stated that it will have no comment until the appropriate time.

Further rumors are indicating that the NCAA may allow any USC player with two or more years' eligibility remaining to immediately transfer to another school, which could lead to a mass exodus of talent for the Trojans. Again, this has not been confirmed. The last time the NCAA made such an exception was during the 1987 SMU death penalty case where they allowed all players to transfer out, creating a situation where SMU had no choice but to take another year off in an attempt to recruit new players.

Reggie Bush was reached and offered this for comment:

"I have a great love for the University of Southern California and I very much regret the turn that this matter has taken, not only for USC, but for the fans and players.I am disappointed by (Thursday's) decision and disagree with the NCAA's findings. If the University decides to appeal, I will continue to cooperate with the NCAA and USC, as I did during the investigation. In the meantime, I will continue to focus on making a positive impact for the University and for the community where I live."

USC will certainly appeal the punishment, but one can't say that HC Lane Kiffin didn't know what he was getting into by taking the job. Kiffin was an assistant coach during the time that these infractions occured, as was assistant Ed Orgeron.

The post-season ban marks the first time since 2003 that a team has received such punishment, with Alabama being the last offender. The NCAA had gotten away from that particular brand of punishment under former NCAA head Miles Brand (pun intended), but have shown an interest in it again with the severity of this case.