Share All sharing options for: Big 12 Off Life Support, Stabilized, Looking to Grow? 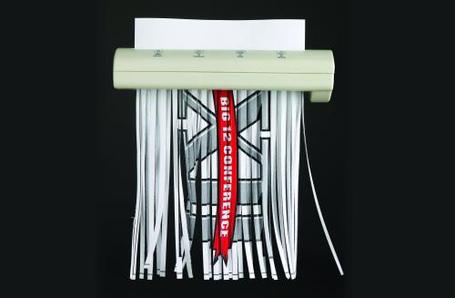 Anyone got any tape?

Breaking this evening, after moving up a meeting set originally for Tuesday, the remnants of the Big 12, led by Texas, have decided to remain in the conference, as the Horns have turned down an invite from the PAC 10, which would effectively prevent any other Big 12 schools from straying as well. Not that they really had a choice, with Bevo pulling the whole conference ox cart. Many issues have been in play over the past 72 hours as Texas flirted with the PAC and Texas A&M threatened secession to the SEC in a twisty-pulley motion that promised to shred the conference to pieces. ESPN is reporting that undisclosed major power brokers in Texas, the Big 12, other conferences, and the NCAA came together to successfully lobby against and prevent an event that many believed as a possible cataclysmic chain reaction for all of CFB. I'm fuzzy on the whole good/bad thing myself, but I think the events occuring after a mass exodus of these teams to the PAC 10 would have been universally acknowledged as being BAD for the sport.

Naturally, there are those who think that we never were really in any danger of the Big 12 folding, as Texas was simply posturing to get a better shake with the finances than they currently enjoy. Like me, for one. Others theorize that Texas simply chickened out at the prospect of being a big fish swimming out of a small pond and facing real competition every season. I discount that heavily, even as the competition diminishes greatly once Nebraska shucks their last ear of corn. The reason why Texas and the other teams are staying boils down to the usual one--money. Today, the top teams, including OU, OK-State, A&M and Texas Tech, drafted a new conference revenue sharing plan that will obviously leave Texas with the lion's share--and most importantly--will allow the Longhorns to possibly form their own television network, further enhancing profitability. Big TWO, little EIGHT, anyone?

My first thoughts when I see the shameless bootstrapping by the Horns is that I'm glad that we in the SEC have a more equitable split and far fewer petty jealousies that could poison the whole well. Parity is the main factor for the SEC avoiding such fates and recent national championship success isthe other. Winning makes everyone happy. While the Big 12 won two national titles last decade, they were left grasping on other occasions, and the gradual slide of the Cornhuskers didn't help the situation. And while there is no doubt that a proud program like Nebraska could not tolerate the power-grabbing in Austin much longer, it is puzzling why an equally proud team like Oklahoma seemingly let Texas drive the Sooner Schooner without exploring their own options more flagrantly to secure a larger piece of the cake. Maybe it's something intangible, say like having class?

So what exactly did we avoid with the Big Tw(ten) coagulating together at the 11th hour? Probably a massive shift in the CFB landscape that might have gone on for a couple of years. There was no doubt that the SEC would have picked up Texas A&M, who definitely was not going to the left coast. And that would have warranted the acquisition of at least another team--probably three more, as the SEC, forced to expand further by default of having an opening to the Texas television market fall right in their lap, would have to get while the getting was good and launch a larger preemptive move to counter what the Big Ten might still do.

More than likely, that expansion would have involved poaching from the ACC, a move that would have been devastating to that conference, especially if teams like FSU, GA Tech, VT and Clemson were coaxed to join. Leaving the ACC cupboard bare would have probably forced the complete cannibalization of the Big East, as the Big Ten might have also moved to acquire a few pieces. In other words, with a few swift moves, we might have dropped a third of the BCS conferences in one year, and that would be too traumatic for CFB fans. We are a conservative bunch who don't like change, or at least for things to move too fast. There's no telling what other unintended consequences might have resulted as well.

Not that conference expansion is over by any stretch. The PAC 10 still needs at least one team to go to divisional play, which is expected. Who could be the lucky lottery winner of the failed Big 12 coup de tat? Perhaps some mid-major wll get the call up to the show--maybe a Boise or a Utah, who seem to be the most deserving yet offer little in terms of the almighty TV dollar. Perhaps a Fresno or a BYU? Maybe it's not too late for Missouri to start flirting with the PAC, being that they look like the biggest chump in all of CFB. They openly beg for Big Ten anointment, yet slither back to Big 12 cheerleader status when it seems the rumors of their invitation were grossly exaggerated. Actually, although Mizzo is looking like Lee Corso after he puts on the wrong mascot head, I call not so fast my friend. Their chance at joining the Big Ten ain't quite over yet.

Uh, uh, uh. I know what you're thinking. How many shots has the Big Ten fired? Was it four or only one? To tell you the truth, I kind of lost track myself in all this conference expansion excitement. But being that they have a few chambers left, I'm not gonna chance it quite yet. The Big Televen has their 12th in line, Nebraska, but they're still waiting on word from South Bend. Hey, we gots to know! What will the Golden Domers do? Bachelorhood isn't what it used to be in this brave new CFB world, so it might be time to get hitched. Obviously, if the Irish consent to joining, they'll need a 14th team, and perhaps even two more after that. Mizzo would be the best complement to landing Notre Dame, and then maybe Rutgers, Pitt, or West Virginia to round it out.

But there's one other conference you shouldn't leave out for expansion--the newly shorn Big 12. They say they'll play with ten, but how hard would it be to pick up two more teams, especially old Southwestern conference members? And how big would the temptation be for old foe Arkansas to rejoin the new Big 12? Sure, you can say they wouldn't leave the glitz and the glamour and money of the SEC, but we don't know that for sure. Their roots there run deep, and you must agree that now would be the perfect time to make the leap back home. Not that I'm advocating the Hogs to get the heck outta Dodge. I'm just saying that if they ever were considering it, NOW is the time. And would one open slot in the SEC be easy to fill, or would it trigger a three-team expansion, or five? I guess it depends on what the Big Ten had done at that point. Fascinating.

But in the end, the reason why you didn't see a mass defection of Big 12 teams to the west coast is that conferences are by definition regional. These schools are regional powers. That's where their alumni base and fans are. You can't diversify yourself away from that. Very few schools have a national fan base. You have to dance with the one who brung you, not sit like a wallflower and flirt with carpetbaggers aplenty. We southerners should understand this easily. The University of Texas belongs in Texas--not in the northeast, not on the coast, but deep in the heart of Texas. And the rest of us belong where we belong, too. For now.