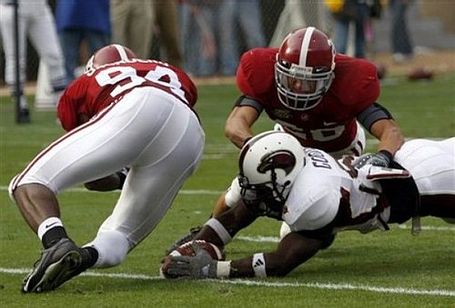 War Eagle, everybody! After finishing the month of September hosting the state of South Carolina for two weeks, Auburn hosts Louisiana Monroe on October 2nd. It's a chance for the Tigers to tune up and recharge the batteries before a four-week barrage of SEC teams on the schedule. Following Monroe, the Tigers have Kentucky on the road, Arkansas and LSU at home, followed by Ole Miss in Oxford. The Warhawk schedule starts with a bang in Little Rock, as ULM will face Ryan Mallett and the high-flying Arkansas offense. ULM opens their Sun Belt season at Arkansas State, followed by Southeastern Louisiana at home. Then the Warhawks travel to Auburn.

It is hard to believe that the Warhawks are only two and a half years removed from the stunning 21-14 upset of the University of Alabama. Louisiana Monroe seemed to be a team on the move. Fast-forward to 2010, and it's a squad with a new head coach, and a defense that only returns four starters. Coach Charlie Weatherbie was fired at the end of 2009, after posting a 6-6 record, 5-3 in the Sun Belt Conference.

The Warhawks' new head coach is Todd Berry, who comes to Monroe via the University of Nevada Las Vegas where he was offensive coordinator. Berry does have head coaching experience, taking lowly Illinois State from the cellar to the Division I-AA semifinals in just four years back in the 1990s. That translated to a head coaching job at Army, where Berry found the going at West Point much tougher. With three last-place finishes in four years in Conference USA, Berry was let go. Since, Berry has enjoyed successful stints as an offensive coordinator at ULM, and Nevada Las Vegas. Berry has some talent to work with on offense at ULM, but has many holes to fill on defense.

Offensively, the biggest surprise out of spring drills is that redshirt freshman quarterback Kolton Browning has taken the number one job away from incumbent starter Troy Revell. The head coach evidently likes the decisions Browning makes. The key weapon for the Warhawks is senior running back Frank Goodin, a thousand yard rusher last season. Receivers are a question, as Louisiana Monroe must replace all of their starters. Junior Luther Ambrose is the most experienced returning receiver. With the addition of JUCO star Ryan McCall at center, the ULM line will have talent, but it's a group that will have to gell. Blitz pickup was a big problem in the Warhawk spring game.

Defensively, coordinator Troy Reffett has his work cut out for him. He was retained from the previous staff, and his 2009 defense finished 2nd in the Sun Belt. Reffett's unit loses seven starters this year, and several of those have gone on to the NFL. One really can't envy the task of taking on the Gus Malzhan offense, with only a single end, a linebacker, a safety and a cornerback returning. There may be some answers, though. Former Homewood star Ken Dorsey will anchor one side of the line, and he brings good size and speed off the edge. Reffett runs a 3-3-5 stack defense similar to what we saw against West Virginia last season.

Junior kicker Radi Jabour returns to lead Warhawk special teams, but he was only 12 of 20 last season on field goals. The Warhawks must break in redshirt freshman punter Thomas Giddens, and they'll be returning punts with a freshman as well, Tavarese Maye. Luther Ambrose was a decent kick returner last year (21.9 yards per), and he'll be back. The Warhawks were pretty good covering kicks (19.6 yards per return allowed), but not as good on punt coverage (10.7 yards per).

Auburn defensive line vs. ULM offensive line: The rebuilt Warhawk line had lots of trouble in the spring game with speed off the edge, and Auburn has that in spades with senior ends Michael Goggins and Antoine Carter. Junior Justin Roberts fills that all-important left tackle position, moving over from the right side where he started last year. The middle of the Warhawk line will be solid, with JUCO center Ryan McCall at center, and senior Andrew Stout at guard. Sophomore guard Jonathan Gill is still recovering from shoulder surgery, but should be ready by September. Auburn's Nick Fairley and Mike Blanc should be up to the task in this one. Advantage: Auburn.

Auburn linebackers vs. ULM backs: Senior runner Frank Goodin has been a weapon for the Warhawks for several years, but until last season, has had injury problems. Auburn linebackers Craig Stevens and Josh Bynes have faced Goodin before, back in the 2008 opener. Goodin was held to 39 yards on 15 carries, as the Warhawks managed only 84 total yards in the 34-0 loss. Advantage: Auburn.

Auburn corners vs. ULM receivers: Auburn's top three corners are Demond Washington, Neiko Thorpe and T'Sharvan Bell. All of those guys have had some great moments on the field in 2009. ULM's top outside receivers are junior Luther Ambrose (34 catches) and junior Anthony McCall (7 catches.) Advantage: Auburn.

Auburn safeties vs. ULM secondary receivers and quarterback: By late September, Auburn should be able to field a solid corps featuring a mix of Aaron Savage, Zach Etheridge, Mike McNeil, Drew Cole and Akeem Means. It's quite a blend of talent and experience for the Tigers. We expect ULM to use a variety of secondary receivers, but frankly we're not sure who they'll be. Junior Tim Taylor had 5 catches out of the slot last year. None of the four tight ends on the ULM roster had a single catch last season. At quarterback, senior Trey Revell returns after starting 10 games in 2009. Revell completed 57.6 percent of this passes for a crisp 8.3 yards per pass. Revell only produced 12 TD passes to 12 interceptions, but rushed for 354 yards and 5 TDs. Revell has been unseated (at least temporarily) by redshirt freshman Kolton Browning, who threw the lone touchdown in the ULM spring game. Sophomore Cody Brown played two games in relief of Revell last season, and ht 55.7 percent of his throws for a 6.6 yards per pass average, with 7 interceptions to only 6 TDs. Coach Todd Berry said of his three quarterbacks, "You could throw them in a sack and pick one out and you would be O.K." Advantage: Auburn

Punting: The Auburn heir apparent at punter is senior Ryan Shoemaker, who was a freshman All-SEC in 2007. Shoemaker has been erratic, but he does have a good leg, as evidenced by his career 41.5 yard average. ULM has awarded the punting job to redshirt freshman Thomas Giddens. ULM will apparently go with redshirt freshman Tavarese Maye to return punts, Auburn is still weighing their options, although Quindarious Carr was the man on A-Day. Both teams had coverage issues last year, with ULM giving up 10.7 yards per return, while Auburn gave up 12.9. Advantage: Even. There are too many unknowns to say otherwise.

Kickoffs: Kickoffs were a sore subject for Auburn last year, with the Tigers only managing only a 40.5 yard net kickoff. Senior Wes Byrum will likely manage the kickoff duties in 2010. ULM loses kickoff specialist Clayton Grant, so junior placekicker Radi Jabour will likely replace him. Jabour managed a 60.7 yard average on 12 kickoffs, but kicked two out of bounds. Auburn has options for returners, although a starter hasn't been named. Mario Fannin (21.2 yards per return) and Onterrio McCalebb (24.7) had success last season, and Demond Washington (31.1 yards) was a late addition who took one to the house against Georgia. The ULM return man will be junior Luther Ambrose, who averaged 21.9 yards per return in 2009. ULM was a bit better in kick coverage, giving up 21.9 yards per return to Auburn's 23.5. Slight Advantage: Auburn.

Auburn offensive line vs. ULM defensive line: Auburn has some fearsome linemen up front, and a lot of starts over the past four years. With juniors Troy Evans and Ken Dorsey manning the end spots, ULM will be quick off the edge. A key matchup will be newcomer Auburn right tackle Brandon Moseley vs. one of those ends. If ULM can get a lineman free in the Auburn backfield consistently, their cause is greatly helped. Senior Quantez Hunter is the largest (273 pound) tackle on a roster that features mostly 240-250 pounders in the middle. Auburn's Ryan Pugh, Byron Issom and Mike Berry should dominate. Advantage: Auburn.

Auburn backs vs. ULM linebackers: Auburn should have a talented trio of runners for this game, led by senior Mario Fannin. Junior H-back Eric Smith will open holes. Senior linebacker Theo Smith is the lone returnee here, and he finished with 57 tackles a year ago. Otherwise, only 29 linebacker tackles return on the roster. Advantage: Auburn.

Auburn receivers vs. ULM corners: The deepest position on Auburn's 2010 squad appears to be at receiver, led by star junior Darvin Adams. The Warhawks return junior starter Nate Brown, who had 2 interceptions, 6 passes broken up, and 49 tackles. The other side will be green for the Warhawks. Advantage: Auburn.

Auburn secondary receivers and quarterback vs. ULM safeties: Auburn should have a number of talented secondary receivers, including sophomore tight end Phillip Lutzenchirchen. The Tigers often line up outside receivers in the slot, and throw a lot of passes to backs out of the backfield. There are at least a half-dozen such candidates who can break a screen pass the distance. In addition, quarterback Cameron Newton has a strong arm, and is a threat as a runner. The lone returning starter at safety for ULM is junior Darius Prelow, who broke up 12 passes and had 62 tackles. Advantage: Auburn.

ULM has played and lost to Auburn seven times, and only the 1996 game was close. Auburn had to generate two 4th quarter TD drives to take a 28-24 win in that one. The average score in this matchup has been a 43-10 win for the Tigers. Expect a similar result this time. Auburn should have overwhelming advantages at most spots. ULM will move the ball, particularly against Auburn reserves. The Auburn offense should be able to name its score, even if they dig deep into the depth chart.

Prediction: It's over early for the Auburn starters, as the Tigers start fast and cruise to a 63-20 win over Louisiana Monroe.