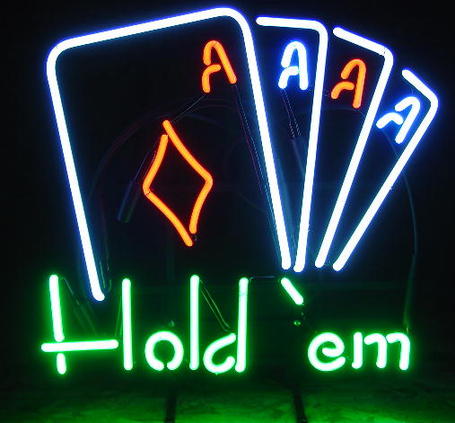 Your cash. Not your cards.

We here in the SEC are in the football beniss, and cousin, beniss is booming! With the recently concluded SEC spring meetings, it looks like the total take of the conference in revenue was $209 million last year and pay czar Mike Slive got to dole out $17.42M per school. As you may know, the SEC distributes it's revenue equally per school, which has served it well over the years. The status quo is good, but the recent shakeup in the Big 12 may have repercussions even in stable conferences like the SEC. In FBS, where the move is to close the gap between the haves (BCS teams) and the have nots (mid-majors), a new brand of social injustice for CFB has apparently reared it's head across the land--in the concept of the heavy-hitters of a conference now taking more of the lion's share of the TV money. Oh, if we only had some form of ACORN for college football to right these wrongs.

We all know now that some think Austin seemingly analgous to the Chicken Ranch in The Best Little Whorehouse in Texas, and used fully it's weight to secure an unprecedented share of the upcoming new Big 12 agreement. Although details have yet to be given, many think that the Longhorns pulled out their Peacemakers and held up and robbed the rest of the existing members. But maybe that's what you get when a conference is too top heavy with too few stars. Under the old revenue -sharing agreement, half the money was split equally among the member schools, but the other half was given out based on TV appearances. Seems pretty fair on the surface. There has to be some incentive for the higher-achievers to earn more while protecting the rest of the conference herd. Kind of like college football capitalism--with some social security, disability and a good dental plan thrown in.

So is it pure socialism if the SEC splits their pie in twelve equal shares regardless of merit or achievement? Relax, it's not an apt comparison. Schools join conferences because they have common interests. They're neighbors, and they look out for each other even while they compete. Or at least that's how they used to do it when conferences were still regional entities. But now that the stakes are getting higher, could a change be in the foreseeable future? Well, maybe, but probably not in the next 14 years, which will be when the SEC's $2.25B TV contract with ESPN and the almost $1B contract with CBS run out. But in an age where a contract means little, don't think that the SEC might not have attempted to renegotiate if the conference expanded or contracted. Yes, I said contracted.

If the SEC would have added a couple of teams, especially one from Texas, it's natural to think that TV contracts would suddenly be worth a whole lot more, and any mega contract like those signed by the conference will have provisions for dealing with such contingencies. But what if the conference actually shrunk, and not only that, but shrunk the deadwood from it's roster? Not only would the resulting product be more valuable to the networks--without the affirmative action scheduling of the light-weights, but there would be far fewer mouths to feed. Imagine the $209 earned split among 10 teams, just like the Big 12 just experienced. You'd be looking at a 20% increase for the remaining SEC teams. Cousin, that's BOOM'in!

But who's going to start cutting teams from the SEC? Mike Bianchi over at the Orlando Sentinel recently proposed that, saying that the conference would be better off dropping both Mississippi teams from the conference (but leaving Vanderbilt for GPA-boosting purposes). He argues that no one out side of the Magnolia state would care and it sure wouldn't diminish any TV revenues. Silly Yankees. They move down and live here for years but they'll never understand the culture of the south. We just don't treat our kin that way. And besides, he's obviously never heard the phrase thank God for Mississippi. They may red-shirt Miss Americas, but someone has to be 50th place in just about everything else.

But he does make a good underlying point--that the conference has it's top crust and it's lower half, and save for the occasional superlative season, little changes for the lower tier teams. The top six--Alabama, Tennessee, Georgia, Florida, LSU and Auburn--get most of the exposure and glamor, especially in the BCS era. So what good are the lower half, except for ballast? More over, is there a better disbursement system than the current one to reward the higher achieving teams? Certainly a pay plan like the old Big 12 agreement sounds plausible, where half the money gets split evenly among the members and the other half by merit. Could the top half force the bottom half into such a scenario when TV contracts are renegotiated? Would resentment be rampant from just such a forced agreement? What could the bottom six do in protest, secede to form another conference? Certainly wouldn't be unheard of from SEC types. That's kind of been our thing, historically.

Or what about a future farther-fetched scenario: one of two top teams, say Alabama and Florida, enjoy so much success that they become the two-horse team that drive the rest of the league stagecoach. Sounds improbable, given the parity in the conference, but hear me out. Could they one day threaten defection much in the way Texas seemingly did to hold hostage the rest of the conference, to everyone's eventual detriment? I certainly hope not. I don't think that's ingrained in our SEC culture, but after seeing how Texas A&M acted in defiance to Texas's price shopping, even the oldest of rivals may decide to go their separate ways one day, and I don't think that the game could sustain such a blow if many others followed suit.

The money has gotten so large and the power bases have gotten so concentrated that revenue sharing might be the biggest threat to our beloved sport in the next decade or so. Not a playoff. Not conference expansions or defections. Not the Golden-Domed stepchild Notre Dame. But pure old-fashioned greed--of money and power. The last two decades have seen college football transition from past time to being a major industry unto itself. I hope that somehow as our sport continues to grow that we don't forget the simple love of the game that got us this far in the first place.