Revenge on the Wildcats!

Share All sharing options for: Revenge on the Wildcats! 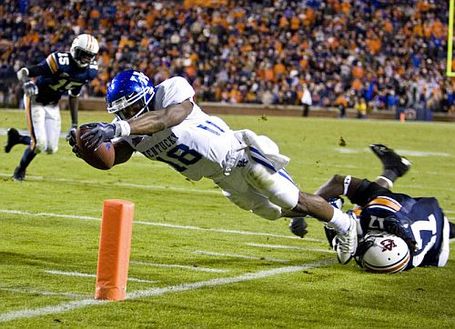 War Eagle, everybody! 2010 football previews continue here at TrackEmTigers.com. This week, we'll look at Auburn's trip to Lexington Kentucky, to play the Wildcats on October 9th. By this time in the Midwest, the weather has usually turned for the worse. Expect a cool came, with a possibility of storms. The winter rains come early in the Ohio valley. Auburn will go on the road after three straight games at home. Kentucky will host Auburn immediately following two tough road games at Florida and Ole Miss. The Wildcats open the season at Louisville, then feast on cupcakes Western Kentucky and Akron at home, before the challenging two-game road swing.

The Wildcats have a new head coach this season, former coach-in-waiting and offensive coordinator Joker Phillips. Succeeding Phillips at the offensive coordinator position is former Volunteer assistant Randy Sanders. If you'll recall, Sanders is the man who followed David Cutcliffe as the leader of the Tennessee offense. Tennessee went from national champions in 1998, to depths such as a 30-3 Peach Bowl loss to Maryland in 2002 under Sanders' watch. Continuing into his third season as Kentucky defensive coordinator is Steve Brown. Under Brown, Kentucky has ceased being the laughing stock of the SEC on defense. However, Brown has some huge holes to fill on his 2010 depth chart, as the Wildcats lost four All-SEC defenders to graduation.

On offense, Kentucky has weapons, including senior bruiser tailback Derrick Locke, and junior all-purpose threat Randall Cobb. Senior quarterback Mike Hartline returns, determined to lock down the starting job, but he faces competition from Cobb, as well as last year's fill-in, sophomore Morgan Newton. Regardless of who starts, Kentucky had difficulty hitting passes consistently last season in big games. In addition to those questions, the Wildcats must replace four starters on the offensive line, as well as their starting fullback. It's really very simple for Kentucky in 2010: find some blockers, or go nowhere.

Kentucky must replace five defensive starters. Gone are Micah Johnson, Corey Peters, Sam Maxwell, Trevard Lindley, and Calvin Harrison. Linebacker is a critical concern, as only junior Danny Trevathan has any significant experience going into the season. It's not all woe for the Wildcat D, though. There is talent on the D-line, and a lot of experience returns in the secondary.

Kentucky was a surprisingly solid special-teams squad in 2009, and should again be good this year. The only significant loss is kicker Lones Sieber. Junior punter Ryan Tydlacka may well be called upon to kick for the Wildcats, if incoming signee Joe Mansour doesn't work out. Good Wildcat coverage coupled with great returns from Derrick Locke and Randall Cobb will mean trouble for Auburn on special teams.

Auburn linebackers vs. Kentucky backs: Auburn seniors Craig Stevens and Josh Bynes were part of the defensive melt-down against the Wildcats a year ago, but didn't have much help on the weak side. This year, Craig Stevens brings critical talent and experience to the weak side, while sophomore Jonathan Evans mans the strong side. Auburn should be improved in the starting linebacker corps, and have better depth. For Kentucky, the biggest offensive weapon is senior tailback Derrick Locke. Locke has breakaway speed and great hands. There's not much experience behind Locke, who's missed time with injuries every season to this point. Converted tailback Moncell Allen is the pick to take over the fullback spot. The senior had 228 rushing yards as Locke's backup last year, but it remains to be seen how well he can block. Allen is listed as 5' 7", 225 pounds. Advantage: Even.

Auburn corners vs. Kentucky receivers: The Auburn secondary did a pretty fair job of corralling the UK receiving corps last year, as no one caught more than two balls, and only one catch went farther than 12 yards. However, run support against sweeps was poor. Neiko Thorpe and Demond Washington have to do a better job getting off blocks and stopping UK runners on the edge. Kentucky returns junior Randall Cobb and senior Chris Matthews at receiver. While Matthews is mostly a possession receiver, Cobb is a threat whenever he gets his hands on the ball. The Wildcats used Cobb all over the field last year, sometimes at receiver, sometimes as the wildcat quarterback, and sometimes even as a tailback. Cobb racked up 573 rushing yards, 447 receiving yards on 39 catches, and 89 yards passing. Advantage: Even.

Auburn safeties vs. Kentucky secondary receivers and quarterback: By October, Auburn should be able to field a solid corps featuring a mix of Aaron Savage, Zach Etheridge, Mike McNeil, Drew Cole and Akeem Means. It's quite a blend of talent and experience for the Tigers. Junior Gene McCaskill returns with 17 catches a year ago in the slot, but the Wildcats lose their top three tight ends. The likely tight end starter this season is junior Nick Melillo. Quarterback was a three-way battle this past spring between senior Mike Hartline, sophomore Morgan Newton, and redshirt freshman Ryan Mossakowski. Hartline has the most experience, but the other two are more mobile. None of these guys lit it up in the spring game. Hartline was 11 of 24 with a pick and a TD, Newton was 6 of 12 with a pick, and Mossakowski was 6-13 for only 37 yards. Passing efficiency was Kentucky's downfall last season, and it looks to be a continuing concern. Advantage: Auburn.

Punting: The Auburn heir apparent at punter is senior Ryan Shoemaker, who was a freshman All-SEC in 2007. Shoemaker has been erratic, but he does have a good leg, as evidenced by his career 41.5 yard average. Junior Ryan Tydlacka returns after a season in which he averaged 40 yards per punt. What the stats don't show is that Tydlack has great hang time, and placement. He killed 20 of his 64 punts inside the opponent's 20 yard line, against only 5 touchbacks, and the coverage gave up only 6.6 yards per return. Auburn gave up a whopping 12.9. Randall Cobb returns punts for Kentucky, and he's dangerous, averaging 12.8 yards per return. Auburn is still trying to find a return man who can hang onto the ball. Advantage: Kentucky.

Kickoffs: Auburn senior Wes Byrum will likely manage the kickoff duties in 2010, having posted a career 62.4 yard average on 83 kickoffs. Sophomore Craig McIntosh averaged 63.1 yards last season, with 11 touchbacks. Auburn has options for returners, although a starter hasn't been named. Mario Fannin (21.2 yards per return) and Onterrio McCalebb (24.7) had success last season, and Demond Washington (31.1 yards) was a late addition who took one to the house against Georgia. Derrick Locke and Randall Cobb were the twin returners for Kentucky last year, and managed 27.8 and 26.5 yards per return, respectively. The Auburn coverage gave up 23.5 yards per return, Kentucky gave up 21.7. Advantage: Kentucky.

Place kicking: Auburn returns senior Wes Byrum, who's coming off a near-perfect year, hitting 14 of 15 field goals and all of his extra points. Kentucky is hoping incoming freshman Joe Mansour will be able to win the kicking job, but if he doesn't the task will likely fall to junior punter Ryan Tydlacka. Tydlacka has hit three of six career field goals, all in his freshman season. Advantage: Auburn.

Auburn offensive line vs. Kentucky defensive line: Auburn has some fearsome linemen up front, and a lot of starts over the past four years. Last year against Kentucky Auburn's crew of Lee Ziemba, Byron Issom, Ryan Pugh, Mike Berry and Andrew McCain had a seriously mental performance against UK. McCain in particular killed several drives with false-start penalties. McCain graduated, and will be replaced by JUCO transfer Brandon Moseley. Despite the mistakes, Auburn cleared the way for 220 rushing yards against the Cats, who'll be less stout up front this year. Kentucky will likely start senior DeQuin Evans and sophomore Collins Ukwu at ends, and seniors Ricky Lumpkin and Shane McCord at tackles. It's a solid line, and there is depth. Against Auburn's veteran front, the Cats may struggle. Advantage: Auburn.

Auburn backs vs. Kentucky linebackers: Auburn should have a talented trio of runners for this game, led by senior Mario Fannin. Junior H-back Eric Smith will open holes. The only returning starter for UK is junior weakside linebacker Danny Trevathan, who's got speed to burn. The Wildcats worked a number of guys during the spring at the other linebacker spots, and a starting rotation isn't settled. Green linebackers against the myriad looks of the Malzhan offense spells trouble for the Wildcats. Advantage: Auburn.

Auburn receivers vs. Kentucky corners: The deepest position on Auburn's 2010 squad appears to be at receiver, led by star junior Darvin Adams. Against Kentucky last year, Auburn could not get the ball downfield, and Kentucky sagged back in a soft cushion zone. The Tigers repeatedly doomed drives by missing an easy five yard hitch to wide-open Adams or Terrell Zachary. This season, the Wildcats must replace 4-year starter Trevard Lindley at corner. Junior Randall Burden and senior Paul Warford should be solid starters. Burden had two picks and eight pass breakups in 2009. Warford posted no picks and six passes defended off the bench. Advantage: Auburn.

Auburn secondary receivers and quarterback vs. ULM safeties: Auburn should have a number of talented secondary receivers, including sophomore tight end Phillip Lutzenchirchen. The Tigers often line up outside receivers in the slot, and throw a lot of passes to backs out of the backfield. There are at least a half-dozen such candidates who can break a screen pass the distance. In addition, quarterback Cameron Newton has a strong arm, and is a threat as a runner. It's a far cry from the UK game a year ago, where Auburn had neither arm strength nor mobility in the game. Chris Todd had his worst outing of the season against UK. Junior free safety Winston Guy is solid for the Wildcats, posting 60 tackles and 5 passes broken up in 2009. Strong safety is still a battle between junior Taiedo Smith, junior Greg Wilson, and JUCO transfer Josh Gibbs. Smith and Gibbs are undersized, at 185 and 193 pounds. Inexperienced safeties can kill you against the Malzhan offense. Advantage: Auburn.

Against Kentucky a year ago, the Auburn offense actually fared pretty well physically against a much more talented Wildcat defense. Drive after drive died due to poor passes, or ill-timed penalties. If Auburn can eliminate the mental miscues, there's every reason to think Auburn will move at will in Lexington this fall. Kentucky will likely continue to be a run-heavy, misdirection offense in 2010. Auburn collapsed defensively in the late going against this bunch, but a lot of that was due to the offense producing only one scoring drive. Most likely, this year's Tiger-Wildcat game will be over by the waning moments.

Prediction: A well-rested Tiger squad steams into Lexington and tramples a young Wildcat team. Auburn strikes early and often, and bowls over the Wildcats, 52-24.