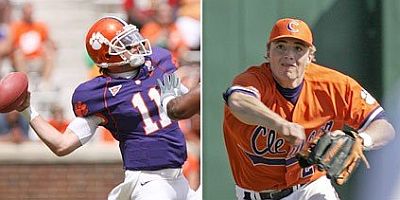 Clemson QB Kyle Parker was a freshman All-American in TWO sports in the same season!

War Eagle, everybody! It's time again to look ahead to Auburn's 2010 football season. On September 18th, the Clemson Tigers visit Auburn. This will likely be a prime-time matchup between a pair of Top-25 Tiger teams. Auburn will have played Arkansas State at home, then Mississippi State on the road. Clemson arrives in Auburn having hosted North Texas and Presbyterian College. Clemson is the defending ACC Atlantic Division Champion. The Tigers lost to Georgia Tech by one possession in the ACC Championship Game, 39-34. Clemson rallied to defeat Kentucky in the Music City Bowl, finishing 24th in the final AP poll. Auburn will face a serious test against this team.

**UPDATE! ESPN has indeed picked this game up. It will be a 7 PM Eastern/6 PM Central kickoff, on ESPN!

Clemson loses two of the most electrifying players in the nation on offense, C. J. Spiller and Jacoby Ford. However, the 2010 squad returns most of a very good line, and has depth and talent across the board. There are talented runners waiting in the wings to replace Spiller. Receivers will be young, but should have the ability to make plays. The real uncertainty about the Clemson offense hinges on the June major league baseball draft. Many expect Clemson's starting quarterback, Kyle Parker, to go in the first round of the draft. Parker was a freshman All-American in 2009, and great things are expected if he plays football in 2010. If Parker takes the baseball money and leaves, the job will fall to redshirt freshman Tajh Boyd. Boyd had a great spring, and should be ready if needed.

Clemson returns a solid run-stuffing defensive line as well as All-American senior safety DeAndre McDaniel. There will be some inexperience at corner and linebacker, but Clemson's defense will remain a strength. The lone returning starter at linebacker is junior Brandon Maye, who had 103 tackles last fall. The Clemson line is not only stout in the starting unit, but will rotate in fresh faces all game. Clemson's depth is impressive on this side of the ball.

Special teams have some questions going into this season. Clemson featured explosive returners last year, but Spiller and Ford are now making NFL money. It's quite possible that Clemson will put nothing but true freshman returners on the field against Auburn. Clemson's kicker, senior Richard Jackson has had consistency issues. Clemson's 38.7 yard punting average isn't terribly impressive. On punt coverage, Clemson gave up 10.9 yards per return on punts. Kickoffs are a different story. Sophomore kickoff specialist Spencer Benton booms 'em high and long. Clemson's opponents averaged starting on the 24 yard line after kickoffs, one of the best figures in the nation a year ago.

Auburn defensive line vs. Clemson offensive line: Auburn's veteran unit of Michael Goggins, Nick Fairley, Mike Blanc and Antoine Carter can give any line problems. The real question for Auburn is who is going to provide meaningful minutes behind those guys. Clemson returns 4 starters on a line that paved the way for a remarkably balanced attack, 2385 yards on the ground, and 2688 through the air. Senior left tackle Chris Hairston was 2nd team All-ACC a year ago. Junior tackle Landon Walker is a two-year starter on the other side. Sophomore center Dalton Freeman was a freshman All-American last fall. Junior guard Antoine McClain is a returning starter. For now, junior David Smith rounds out the starting lineup, but this fall we could see junior Mason Cloy in the lineup. Cloy has battled injury, but has 17 starts and was a freshman All-American at guard in 2008. This is a strong, athletic offensive line. Auburn must play well to avoid being blown off the ball. Advantage: Clemson.

Auburn linebackers vs. Clemson backs: Auburn's starting trio of linebackers Craig Stevens, Josh Bynes and Jonathan Evans will be solid. It's a mistake to think of Clemson as suspect in this spot, with the loss of Spiller. Clemson will have a "thunder and lighting" attack reminiscent of the 2007 squad, I think. Sophomore Andre Ellington broke onto the scene last year, with 491 rushing yards and a gaudy 7.2 yards per carry average. He has speed to burn. The hammer will be 230 pound junior Jamie Harper, who gained 418 yards last year at 5.2 yards per carry. Leading the way is junior fullback Chad Diehl, a brutal 255-pound blocking machine. Auburn will have to have some help from the reserves to hold up against this backfield. Advantage: Clemson.

Auburn corners vs. Clemson receivers: Auburn's top three corners are Demond Washington, Neiko Thorpe and T'Sharvan Bell. All of those guys have had some great moments on the field in 2009. Clemson loses their top three receivers from a year ago. Emerging atop the Clemson depth chart are senior Terrence Ashe and junior Marquan Jones. The pair combined for 20 catches and one touchdown in 2009. One to watch behind the starters is redshirt freshman Bryce McNeil, who had a big spring. McNeil can fly, but he's only 170 pounds. Advantage: Auburn.

Auburn safeties vs. Clemson secondary receivers and quarterback: We're mostly guessing on this matchup, depending on the health of Auburn's front-line guys, and the availability of Clemson's starting quarterback Kyle Parker. A safety corps featuring a healthy Aaron Savage, Zach Etheridge and Mike McNeil might be among the league's best. A starting lineup of Drew Cole and Akeem Means will be vulnerable. Clemson is in a bit of a quandary on secondary receivers. The bulk of those catches went last year to tight end Michael Palmer, who graduated. Fullback Chad Diehl only caught two balls. Starting at tight end in 2010 will be sophomore Dwayne Allen, who caught 10 balls in 2009 for 3 TDs, mostly as a bootleg option in short yardage. If sophomore Kyle Parker returns, Clemson will have a veteran QB with a strong arm. Parker was a freshman All-American in both football AND baseball! Parker hit 55.5 percent of his passes for 2526 yards, 20 touchdowns, and 12 interceptions. That's an average of 6.8 yards per pass. If Parker opts for baseball, Clemson will go with redshirt freshman Tajh Boyd. Boyd will enter the game without a single snap against BCS conference competition. Advantage: Even.

Punting: The Auburn heir apparent at punter is senior Ryan Shoemaker, who was a freshman All-SEC in 2007. Shoemaker has been erratic, but he does have a good leg, as evidenced by his career 41.5 yard average. Clemson returns junior Dawson Zimmerman, who averaged 39.1 yards in 2009. If Clemson's spring game is any indication, there may be some competition this fall. Zimmerman averaged 44.4 yards, and senior backup Richard Jackson averaged 50 yards on ten punts. Neither team is set as far as return men. Auburn gave up 12.9 yards per return, and Clemson gave up 10.9. Auburn must avoid putting the ball on the ground like they did last year. Advantage: Clemson.

Kickoffs: Kickoffs were a sore subject for Auburn last year, with the Tigers only managing only a 40.5 yard net kickoff. Senior Wes Byrum will likely manage the kickoff duties in 2010. Auburn gave up 23.5 yards per return, while Clemson gave up only 20.0. Both teams are unsettled at the returner positions, but both teams have options. Spotty Auburn coverage makes this Advantage: Clemson.

Place kicking: Auburn returns senior Wes Byrum, who's coming off a near-perfect year, hitting 14 of 15 field goals and all of his extra points. Clemson senior Richard Jackson hit 20 of 31 attempts and missed a pair of extra points. Advantage: Auburn.

Auburn offensive line vs. Clemson defensive line: This is a strength vs. strength matchup. Auburn has a veteran line featuring likely post-season honorees Lee Ziemba and Ryan Pugh. Clemson is stout and deep up front, although they may lack the speed off the edge previous opponent Mississippi State possesses. Junior Brandon Thompson and senior Jarvis Jenkins anchor the middle of the Clemson line. These two combined for 119 tackles in 2010. Junior DaQuan Bowers and junior Andre Branch man the end spots. Bowers is perhaps the most dangerous end, but he's been plagued by injury problems the past could of years. Behind the four starters there is lots of talent and experience. This is a group that Auburn needs to jump on quickly, and gain the upper hand. A game-long grudge match plays to the superior numbers Clemson can put on the field. Advantage: Even.

Auburn backs vs. Clemson linebackers: Auburn should have a talented trio of runners for this game, led by senior Mario Fannin. Junior H-back Eric Smith will open holes. Clemson only has one returning starter, junior Brandon Maye, who posted 103 tackles last fall. Penciled in as starters are sophomore Coricho Hawkins and redshirt freshman Quandon Christian. Hawkins made most of his 19 tackles on special teams last fall. The Gus Malzhan offense is a challenge for new starters. It's very easy to get out of position against the myriad shifts and looks that Auburn presents. Advantage: Auburn.

Auburn receivers vs. Clemson corners: The deepest position on Auburn's 2010 squad appears to be at receiver, led by star junior Darvin Adams. Clemson must replace two great corners. To do it, they'll move senior safety Marcus Gilchrist over to corner, and promote senior reserve Byron Maxwell. Both of those starters have good tackling ability, and the speed to stay on receivers like glue. There should be little dropoff, although it remains to be seen whether either can match up with Darvin Adams. Slight Advantage: Auburn.

Auburn secondary receivers and quarterback vs. Clemson safeties: Auburn should have a number of talented secondary receivers, including sophomore tight end Phillip Lutzenchirchen. The Tigers often line up outside receivers in the slot, and throw a lot of passes to backs out of the backfield. There are at least a half-dozen such candidates who can break a screen pass the distance. In addition, quarterback Cameron Newton has a strong arm, and is a threat as a runner. Clemson will likely be up to covering secondary receivers, with senior strong safety DeAndre McDaniel, an All-American last fall. McDaniel had eight interceptions and 102 tackles. Joining McDaniel is sophomore Rashad Hall. Hall posted 63 tackles last season, and was another freshman All-American for Clemson. Advantage: Even.

Clemson's offensive game plan last season was to pound the ball and burn folks with play-action. I suspect we'll see a lot of the same this year. Auburn must stop the run and limit big plays. That's doable against Clemson, but Auburn will have to be better against the run than they were in 2009.

Former Saban disciple Kevin Steele runs the Clemson defense, and did a good job holding down some good offenses last season. When there was damage done against Clemson, it was often the running game. Georgia Tech gave them fits, rolling up 887 yards in two games, 634 on the ground. With two new starting linebackers, stopping the Malzhan attack will be tough. Auburn will have success on the edges, but the going will be tougher in the middle. I'd expect to see a good bit of zone-read and option out of Auburn. Much like the Mississippi State strategy, I think Auburn will try to test Clemson's secondary with quarterback Cameron Newton's legs. Newton is 245 pounds, and the heaviest member of the two-deep secondary for Clemson is DeAndre McDaniel at 215. There are going to be some mismatches on the edge of the field in Auburn's favor.

Clemson should hold edges on most special teams, except for place kicking. Kicking is what usually puts the points on the board. As long as Auburn doesn't have too many poor coverages or dropped balls, I think it's a wash on special teams.

Prediction: The Auburn offense and a raucous Jordan Hare Stadium crowd is too much for a younger Clemson team. Auburn runs away with it, 37-20.