Magical Season Comes To An End

Share All sharing options for: Magical Season Comes To An End 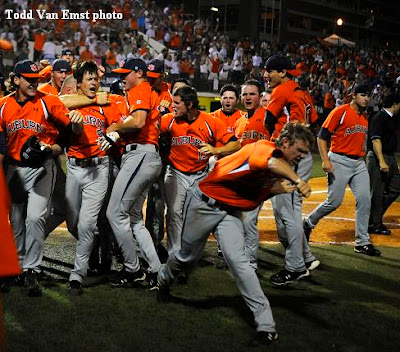 Creede Simpson greeted at home plate after his dramatic 3 run homer in the NCAA Regional.

We all knew this Cinderella season had to come to an end some time. Well the brakes were applied by Clemson Monday night when Auburn lost the NCAA Regional Championship game 13-7. However, the game was much closer than the scoreboard showed. Auburn out hit Clemson 18 hits to 14. But they could only push seven runs across the plate and left 12 men on base. This group has played their best most of the year when their backs were against the wall. In the end though they needed one more miraculous home run, one more bases clearing double, one more great pitching effort; but... it was not to be.  They went to the well one time too many and this time they could not quite pull it out.

Oh but what a great season! They restored Auburn Baseball and reinforced to Auburn fans that it's truly "Great to be an Auburn Tiger." Yes, they believed and in turn made us all believe. Call me naive but I really had the lights of Omaha and the College World Series in my eyes, and why not? You did not have to be a starry-eyed optimist back in the beginning of the season to sense something was going to be different about this year. Somehow you could feel it after that SEC opening series against Georgia; when Auburn swept the dogs by a three game run total of 43-9.  It was evident then that this group had the collective "Eye of the Tiger".

This season produced many magical moments like making the SEC Tournament for the first time in seven years, sweeping Ole Miss in what was really the Western Division Championship Series, being chosen as the host team for an NCAA Regional, and Hunter Morris's grand slam Saturday night against Southern Miss to help propel the Tigers into the championship games against Clemson. But none was more memorable or more dramatic than Creede Simpson's three run homer with two strikes, two outs in the ninth inning Saturday night to keep the Tigers alive and force Clemson in to a final game two on Monday night.

Simpson grew up in Auburn with dreams of playing at Hitchcock Field. He was brought in late in the game as a defensive move due to starter Trent Mummey nursing a sore hamstring. Then it happened; the Tigers were down 9-8 in the ninth facing elimination with Simpson at the plate, with two strikes and two outs he hammered the next pitch over the "green monster" in left center for a three run homer. To Say pandemonium broke loose in Plainsman Park does not really describe the crowd's reaction. Auburn veteran radio announcer Rod Bramlett went absolutely crazy calling the play. Every baseball fan needs to witness the video of this incredible event. Phillip Marshall of Undercover.com has been covering Auburn for over 30 years and he said "I've been to lots of ball games at Auburn. I never heard it as loud as it was Sunday night and I've never witnessed a moment here as dramatic as it."

What a journey this team has been on this year and what a magical season it has been. Coach John Pawlowski (in his second year) took his team from next to last place in 2009 to Division Champs this year. The team far exceeded their preseason goal of making the SEC Tournament. They also were Champions of the West, the first baseball championship in 15 years; host to an NCAA Regional; had a 40-23 record including 20 league wins that is the best in Auburn history. In addition they were at the top of the SEC in almost every offensive category, which included a team batting average of .348, a slugging percentage of .591, extra base hits of 293, and led the nation in homeruns with 131.

The only question now, is will we lose some of these guys to the on going Major league draft? Many believe we have seen Hunter Morris play his last game as a Tiger. If any on the team accept draft offers, no one can hold it against them because they have more than given their best to Auburn University. Plus, every kid that has ever picked up a bat has dreamed of one day getting the chance to play in the majors.

So if they go, Auburn fan, be happy for them, wish them well, and be thankful for the magical season they gave us. War Eagle!