First Shoe to Drop: Nebraska to Big Ten by Friday?

Share All sharing options for: First Shoe to Drop: Nebraska to Big Ten by Friday? 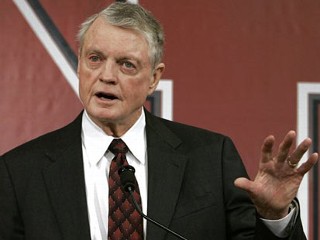 He was a Congressman. He wouldn't lie.

Mere days after supposedly being given an ultimatum to tell the Big 12 if they should stay or go, Omaha.com is reporting that Nebraska University could join the Big Ten by this weekend, even as soon as Friday. NU chancellor Harvey Perlman has declined all interviews and will be meeting with his board of regents on Friday in Lincoln. Although no official sources at Nebraska are confirming anything, there are reports that other Big 12 athletic directors are poised to address changes in the conference by week's end.

But that doesn't mean that Tom Osborne isn't talking. Reached last night, Osborne agreed that things have been accelerated quite a bit:

"I think before too long--I don't know exactly what the time frame is--we'll be able to put this to bed.....(jokingly) because I'm getting tired of it."

"Anything I would say regarding Nebraska's position or other schools in the Big 12 would be pure speculation. And I don't think that's very helpful."

A sub plot to this story has been brewing--Osborne's rumored dislike of Texas and their implied shot-calling and flirtations with other conferences from sea to shining corn field--was adressed by him:

"We certainly don't have anything against anybody in the Big 12. This decision is not going to be based on animosity or petty jealousy. You're talking about something that could maintain for the next 75 to 100 years."

"This is not a case of reacting to any one school, particulary Texas."

Which leads me to believe that Texas is exactly the prime reason Nebraska might leave.

Obviously, if Nebraska goes, Mizzo is a shoe-in for same. But I'm going to go out on a limb here and say that the rest of the conference will stand pat. Pride may manifest itself as resolve to keep the conference together--even if the new Big 12 more closely resembles the old Southwest conference.