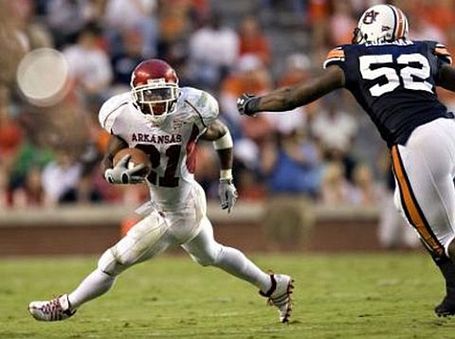 Auburn has had struggles against Arkansas

War Eagle, everybody! This week, we're taking a bit of a break from the 2010 preview and prognostication pieces of the past few weeks. One of the stranger things I kept reading during the past spring's mega-conference expansion madness was that Arkansas somehow was not a good fit in the SEC and didn't really belong. The Razorbacks are Auburn's seventh opponent this coming season, and we'll preview the matchup next week. This week, we'll look at the history of the Auburn/Arkansas series, and generally at Arkansas' place in the league since 1991.

One of the first arguments trotted out by those who'd see Arkansas leave the league is geography. Fayetteville is a long way from other SEC schools, they say. True, but it's hardly an order of magnitude more travel than other journeys in the league. Anyone who's ever driven from Gainesville to Nashville will tell you that! Fayetteville is 455 miles from the SEC office in Birmingham, and Gainesville is 375 miles.

The next argument against the Razorbacks is that they have not been competitive in football in the SEC. Fact is, Arkansas has pretty much been right in the middle of the pack, and currently has the 7th best SEC mark in the league since beginning SEC play in 1992. Arkansas has been to the SEC Title game the same number of times Auburn has, and they have three times the number of appearances the state of Mississippi has.

Arkansas has usually been one of the most worrisome opponents on the Auburn schedule, and this year is no exception. Since the Razorbacks joined the SEC, Auburn has won nine games, lost eight, and tied one game against Arkansas. Arkansas actually leads the series in points scored, thanks to several blow-outs, 417 to 400.

Auburn vs. Arkansas history, after the jump!

1984: The first meeting of the two teams was in the Liberty bowl before Arkansas joined the SEC. Bo Jackson returned from an injury-marred regular season, and Auburn powered past the Hogs 21-15.

1992: The Tigers were playing for bowl eligibility at home, while Arkansas was lame-ducking along with interim coach Joe Kines, but you wouldn't have known it by how this game went. Auburn jumped out to an early 14-3 lead before Arkansas answered with a score and a two point conversion. Auburn appeared to be driving for a score just before halftime, but the Tiger lead evaporated when Stan White threw a pick-six that bounced off the intended receiver. The two teams slugged their way to a 24-24 tie midway through the 4th quarter, and neither team could cross midfield in the final six minutes. A 24-24 tie went in the record books.

1993: It was another hard-fought Tiger/Razorback game, this time in the snow in Fayetteville. Brian Robinson broke open the game in the 3rd quarter with a pick six when a Razorback receiver slipped down. Arkansas was still in the game till Auburn turned fullback Reid McMillon loose for two 4th quarter TD romps. Auburn won, 31-21.

1994: This game was again tight. After arguably Auburn's biggest win over Florida ever, 36-33 over the number one Gators in the Swamp, Auburn trailed Arkansas in Jordan Hare entering the 4th quarter, 14-10. Stephen Davis exploded for three 4th quarter scores, and Auburn won, 31-14.

1995: It was the first of several Auburn nightmares in the series. Auburn was totally stymied by a blitzing Joe Lee Dunn defense, while the Razorback's Madre Hill ran all over the Auburn D. Arkansas stomped out to a 27-0 halftime lead in Little Rock. Auburn roared back, scoring a touchdown and two point conversion with 18 seconds left to pull within 30-28. A perfectly executed onside kick followed, and Auburn recovered with no time off the clock. After the 17th completion of the game from Patrick Nix to Willie Gosha, Auburn rushed the field goal team on for a 52 yard try. The kick was partially blocked, and Arkansas held on, 30-28.

1996: Arkansas steam-rolled to a 7-0 lead in Auburn, but then senior quarterback Barry Lunney Jr. got hurt, and it ended the Razorbacks' offensive chances. Dameyune Craig and the Auburn offense scored four times, and Auburn enjoyed the largest Tiger winning margin in the series, 28-7.

1997: In the cold rain in Fayetteville, Auburn dominated up front, building a 13-0 lead in the second quarter. Arkansas scored off a Dameyune Craig fumble just before halftime. Auburn pulled away in the third quarter, in part on a 70 yard bomb to Karsten Bailey. Auburn built a 26-7 lead, but Arkansas came back on the arm of quarterback Clint Stoerner. Auburn survived at the end, swatting down a couple of hail Marys in the the endzone. The Tigers prevailed, 26-21.

1998: It was lame duck time in Auburn, in interim coach Bill Oliver's first game after the resignation of Terry Bowden. Auburn took a brief lead in the second quarter with a 37 yard TD pass from Gabe Gross to fullback Tellie Embry, but Arkansas turned Gross turnovers into a 17-7 Razorback advantage at the half. Auburn stormed back in the third quarter. Touchdowns by Karsten Bailey and Demontray Carter gave Auburn the lead, and they were driving again. On 4th and 1 from the Razorback 30, Gross fumbled the snap from center Colin Sears. Sears was the sixth center on the Auburn roster, at a position decimated by injury. Arkansas rolled to a quick score, and held on, 24-21.

1999: Auburn basically failed to show up till late in the 4th quarter in this miserable game in Fayetteville. With the Tigers down 34-3, running back Heath Evans took the offense on his shoulders and banged for a late Auburn score. Auburn was blown out, 34-10.

2000: It was a tight game in Jordan Hare Stadium. The two teams swapped a pair of first half touchdowns each. One of Arkansas' scores came on an 80 yard Fred Talley run, in which no Auburn defender could lay a hand on the runner. Auburn took a 21-14 lead early in the 3rd quarter, and the offense seemed spent at that point. The defense turned back the Razorbacks time and time again. Damon Duval gave up an intentional safety late, and Auburn hung on for a 21-19 win.

2001: In Fayetteville, Auburn was gashed early and often by the Razorback option attack, and faced a 14-3 deficit in the second quarter. The Tigers rallied for a score behind the running of freshman sensation Carnell Williams, and were looking for more just before the half. An errant throw-away by quarterback Daniel Cobb was picked off, and Auburn was down 21-10 at the break. The Tigers rode Carnell Williams to pull within 21-17 entering the 4th quarter. Auburn then proceeded to absolutely melt down on both sides of the ball, and Arkansas enjoyed its largest winning margin win in the series, 42-17.

2002: In Auburn, Gene Chizik's inaugural defense had no clue against Arkansas. The Razorbacks rolled up an astonishing 426 rushing yards on the Tigers, with Fred Talley doing much of the damage. Auburn hung with Arkansas in the first half, but were beaten down in the second half. Arkansas embarrassed Auburn at Jordan-Hare, 38-17.

2003: What a difference a year makes! In Fayetteville, Gene Chizik's defense stonewalled the Razorbacks, and did not allow a touchdown. A Carnell Williams score just before half was all the Tigers needed. Auburn held on for a 10-3 win.

2004: Auburn came out and hit Arkansas early with a 67-yard flea-flicker bomb from Jason Campbell to Devin Aromashodu. Tiger points came rapidly, as Auburn built a 30-0 second quarter lead. Razorback quarterback Matt Jones scrambled for a couple of scores and tried to get Arkansas back in it, but Auburn prevailed, 38-20.

2005: The first half in Fayetteville was a low-scoring slug fest, with the Razorbacks holding a 10-6 advantage. Auburn turned Kenny Irons loose in the second half, and rumbled to a 34-17 win.

2006: One of the more embarrassing performances in Jordan-Hare history happened in 2006. Auburn allowed two long Razorback scores in the first half, and the offense went completely to sleep in the second half. The underdog Razorbacks crushed undefeated Auburn's BCS hopes, 27-10.

2007: In Fayetteville, it was the Razorback offense's turn to snooze. The hard-hitting Auburn defense held Heisman-candidate running back Darren McFadden to a mere 43 rushing yards. Sidekick Fred Jones managed only 42 yards. It was up to the arm of quarterback Casey Dick, who led Arkansas on a 4th quarter drive to take a 7-6 lead with a minute and a half left. Auburn answered. Brandon Cox hit Robert Dunn on a 30 yard crossing pattern, and true freshman Wes Byrum hit a 20 yard field goal. Auburn won, 9-7.

2008: In Auburn, the Tigers were manhandled up front by the Razorback offensive line, but still led 13-10 at the half on a pair of interceptions by Neiko Thorpe and Josh Bynes, and a 97 yard kick return for a score by Tristan Davis. Arkansas fumbled the second half kickoff, and spotted Auburn a 20-10 lead, but it was all Razorbacks from that point. Auburn failed to capitalize on several late drives. Arkansas gave up a late intentional safety to the Tigers, and won 25-22.

2009: In an early game in Fayetteville, the Auburn offense missed the morning wake-up call at the hotel. A suspect defense was exploited mercilessly by quarterback Ryan Mallett. Auburn had already given up 24 to Mississippi State and 30 against both West Virginia and Ball State. The Tiger secondary had even made Jonathan Crompton look good the week before in Knoxville. It was the perfect storm for Arkansas. The Razorbacks raced out to a 27-3 halftime lead. Auburn went on a twenty point tear in the third quarter and tried to make a game of it. Trailing only 34-23, Auburn then gave up a 70 yard kick return to set up another Razorback score. Arkansas won, 44-23.