Tubs Doing It His Way Down in Texas

Share All sharing options for: Tubs Doing It His Way Down in Texas 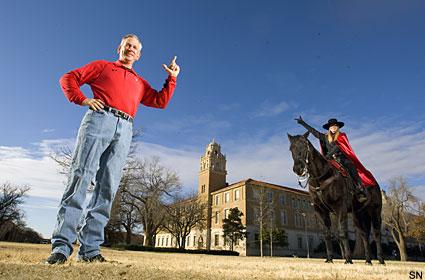 Tommy Tuberville, never one to shy away from being direct, seems to be saying what he feels once again, which could be designed to keep Texas Tech on the map, but might not be endearing himself to other teams and coaches as the new kid on the block. Recently, on a radio show, Tubs offered up his opinion on the future of the conference formerly known as the Big 12:

"I don't think this conference will last long because there is too much disparity between all the teams," Tuberville said. "In the SEC, for instance, Vanderbilt makes as much money in the television contract as Florida. Everybody is good with it. Everybody is on the same page. Everyone gets the same votes.

"That doesn't happen here in the Big 12. We have some teams that get a little bit more money and have a little bit more stroke than some of the other teams. And when that happens, you're gonna have teams looking for better avenues to leave and reasons to leave. We have a 10-team league right now, but I just don't know how long that is going to last, to be honest with you."
Wow, CTT. Tell us how you really feel. Is it just me, or does Tubs seem to be falling into the same mold as the dread pirate Mike Leach, who was ousted in part for pissing off the powers to be in Lubbock?
But even more interesting is his recent hire of strength and conditioning coach Arnold Gamber. Now if that name sounds familiar to some of you, it should. Gamber was Auburn's strength and conditioning coach under Tuberville and was also at the heart of the controversy with former Tiger lineman Chaz Ramsey and his career-ending back surgery. In December 2007, Ramsey had the surgery and was rehabbing it that spring. The story, as told by the Birmingham news:

The rehab program that followed was the source of what quickly became a bitter dispute between the Ramseys and Auburn's training staff.

Ramsey said he returned to Auburn in late May, about six weeks after his surgery, with his back feeling great. But an aggressive treatment program initiated by Auburn's training staff not only conflicted with the specific plan laid out by the surgeon, but actually made things worse, Ramsey said. Two months after the surgery, his back was back to "square one."

The conflict only escalated. Ramsey accused head trainer Arnold Gamber of calling him "less than a man" and suggesting that he use pain medicine for the rest of his Auburn career. The Ramseys say that Auburn team physician Dr. Michael Goodlett was horrified that the rehab directives were not being followed, and told Ramsey to report directly to him, not the training staff.

A year ago this month, Ramsey filed a lawsuit against Gamber and former OL coach Hugh Nall for "compensatory and/or punitive damages" for "pain and anguish" and "the denial of a very probable career in the NFL."  Nall was dropped from the suit last month.

The bigger question is why would Tuberville hire a man who has a blemish like this on his record (still unproven, however) for possibly abusing players when his head coach predecessor at Tech was fired for doing the exact same thing? One must wonder if Tubs made this hiring decision unilaterally without conferring with the higher ups who pay the legal bills. A hiring like this might go a long way into helping Leach's pending lawsuit against the university.

Of course, fielding a winning team in Lubbock this fall will make any Tubs detractors fade away for a while--even Craig James. I'm not sure what a pass-happy Tubs team will look like, but I can tell you that they will start to play defense down there. For a change.