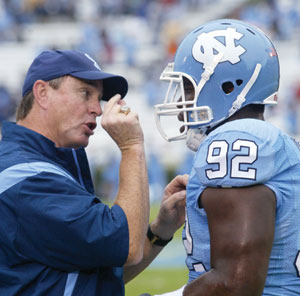 Don't even talk to an agent a little bit!!!

Late last week, reports surfaced that a months-long NCAA investigation into North Carolina is occurring, with reported widespread tampering by agents with many players alledged. Up to 13 Tar Heel players may have been interviewed, the most prominent being defensive tackle Marvin Austin, who is expected to be suspended by the NCAA very soon.

Darren Heitner, a legitimate sports agent who claims to have insider knowledge of the situation in Chapel Hill, had this to say about the depth of the problem in his blog last week:

"So when Joe Schad tells the world that there is a serious NCAA investigation taking place at UNC, sports agents who may be affected should begin to contact their attorneys. Schad notes that Defensive tackle Marvin Austin was a football player who was interviewed. I have a source who tells me that Austin was only 1 of 13 players who have been interviewed - this is far reaching. And it does not only extend to a number of players. The same source tells me that there are a lot of agents that may have dirty hands, including both NFLPA Certified Advisors and marketing agents. Some are being examined more than others.
It is apparently beyond just in-person meetings, rent payments, and travel expenses. We are potentially talking about all expenses paid trips to South Beach, exorbitant amounts of money dropped on accessories, and perhaps even a Bentley or two."

A Bentley or two? I hope they only rented one. And got the full-coverage insurance.

How widespread is this particular case? It seems to have now jumped to South Carolina, as TE Wesley Saunders, who is friends with Austin, has been interviewed by the NCAA. Saunders and Austin allegedly compared notes about 'interviewing' potential agents. Saunders was suspended earlier this year by coach Steve Spurrier for violating team rules.

Then, breaking news today from Florida, that the school self-reported to the NCAA in early June an investigation over allegations that a representative from a sports agent paid former OL star Maurkice Pouncey$100,000 sometime in between last year's SEC championship game with Alabama and the Gator's Sugar Bowl blowout of Cincinnati. Pouncey, who was a junior, declared for this year's NFL draft and was taken in the first round by the Pittsburgh Steelers.

"We were made aware of some information in early June that we reported to law enforcement and we then shared with the NCAA and the SEC," said AD Jeremy Foley. "At this time we have no information that has indicated that there are any compliance issues for the University of Florida."

If the allegations turn out to be true, Florida could be made to vacate the Sugar Bowl victory, Tim Tebow's last hurrah as a Gator. Wow. Are we really still talking about him? I guess we are. I just hope they haven't started engraving the statue.

Has no one learned anything from the Reggie Bush incident other than how to try and hide it better? Granted, these cases don't sound like they went on for years like the RBI, but before you go casting stones, know that conduct like this can occur at any school. There are 38 states that have some sort of civil and/or criminal penalties for enticing amateur athletes, but there are very few prosecutions in this area. Players darn well know the rules when it comes to contact with an agent--immediate suspension and loss of future eligibility, which could depreciate future draft status significantly. Then there's the damage to the school, which even in a small incident can tarnish reputations and force the vacation of games or entire seasons.