Share All sharing options for: Tennessee Turns Down Shot at Kiffin Bowl 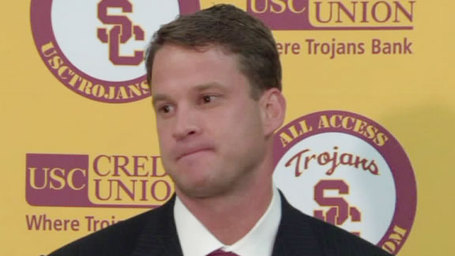 Maybe the Vols should drink the whole bottle of Jack Daniels and MAN UP!

Tennessee's athletic director Mike Hamilton confirmed yesterday that the Volunteers will not choose to accept an offer from Lane Kiffin and USC to meet in the 2011 Chick-Fil-A Kickoff game, sponsored by the Atlanta Sports Council. Hamilton has been approached a few times by ASC president Gary Stokan, and has apparently received a few text messages from Lane Kiffin himself. Failing to rise up and challenge this obvious bravado from Kiffin, Hamilton spoke the words that made every safety-orange checkerboard clad Vol fan's stomach churn.

"We've got plenty to keep us busy in 2011 already. We're building our program back, and our schedule is tough enough as it is. The reality of it is if it was Texas or UCLA in the Chick-Fil-A Kickoff Game, we just couldn't do it in 2011."

That's right, he said that the schedule was "too tough" already.

What? Are you kidding me? What was all that jive about getting hosed by Kiffin? I thought you guys were going to get him back somehow? Now you get the perfect chance and all you can say is No Mas?

But, infers Hamilton, Tennessee couldn't play the game even if it was Texas or UCLA. Huh? It ain't UCLA. It's USC. And your ex-coach. How do you not pull the trigger on this game? Yea, the Vols have a tough OOC schedule next year with Cincinnati and North Carolina, but they start the season with North Texas. Cut those guys a check and say GAME ON to Kiffykins. If not for your own self-respect, at least for that for the rest of the conference. Even Pat Dye is saying that Tennessee isn't man enough to play USC in a virtual home game. Word has it that Phil Fulmer has said that he could make himself available for the game--not to coach, but to play.

Tennessee and USC do have a home and home inked for 2021 and 2022, but Kiffin is as likely to still be the coach at USC as the Big 12 is to still being a conference or Utah is to winning the Pac-12. Tennessee is also scheduled for the Kickoff Game in 2012 against NC State, but who says you can't play two of these games in a row? Alabama played in 2008 and 2009. This turn down by Tennessee is even worse than Auburn ducking a chance to play UCLA in 2010. Keep declining a marquee game like this, SEC, and see if they don't start looking at other conferences.

Vols, I felt for you. You got played by a slickster. Your program deserved better than him--the biggest-mouth-running coach in CFB history. And now he gets to keep running his mouth by telling everyone he gave you a shot and you said NO, it's just too hard. Somewhere on Rocky Top, a couch burns.