A SEC/Big 10 Week One Extravaganza?

Share All sharing options for: A SEC/Big 10 Week One Extravaganza?

I walked outside early this morning and noticed the leaves on the trees changing. Maybe Mother Nature knows what we do; Auburn football is a mere 25 days away. Then I realized the leaves had changed because the trees were dead along with every other living thing subjected to outside life in the South. There's less than four weeks to break this weather pattern or we are in for what may be the most miserable tailgating experience in recent memory. But I know how Auburn people are; they'll just stand in the heat and smile and act like there's no place they'd rather be. Count me among them...

In recent months, I've spent my mornings driving to work listening to Bill King on Rivals Radio. I decided to give up the smut of Howard Stern. I must admit I love his humor, but my wife convinced me I didn't need that crap going into head on a daily basis. See honey, I told you that one day my knuckles wouldn't drag the ground.

The show is carried on Sirius XM and is dedicated almost completely to college football.  Last week a caller offered up a great suggestion that I believe is worth investigating.

He suggested the SEC and Big Ten pair each member school according to last year's final conference standings and play during week one or two of the season. With conferences almost unilaterally moving to 12 team leagues the pairings would be easy.

The conference team with the highest ranking in the USA Today's Coaches Poll at the end of last season would host the matchup between the top two seeds. From there, the conferences could alternate home and away. If it played out this season, the schedule would look something like this (assuming Nebraska is already in the Big 10):

Imagine opening the season each year with a branded SEC/Big 10 Showdown. Tell me this wouldn't be better than starting with Arkansas State. It would certainly bring more urgency and excitement to the off-season.

The SEC could do a two year deal with the Big 10 and then sign a deal with the Pac 12. From there, they could work a deal with the ACC. Basketball has been doing something similar for years. Fans love to argue about who has the better conference. This format would go a long way in answering the question.

Will it ever happen? Probably not. With worries about balancing the books and scheduling enough home games each season, I'm sure the school presidents will find excuses for keeping these kinds of things from happening. 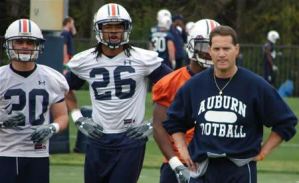 The Atlanta Constitution's Tony Barnhart raised a great point  last week in regards to closed practices. Many of us have complained openly here at TET that closing fall practice takes a lot of the excitement away from the fans. Barnhart believes the chief reason most SEC schools have gone to closed sessions is because of social media - primarily Twitter and Facebook.

It's something I truthfully had not thought of until his story. According to Barnhart it's something that started because of an incident at Texas:

A Texas player gets hurt at practice. The normal protocol for reporters on something like that is to wait until the end of practice and then consult with the coaches and training staff for an assessment of the injury. But with Twitter and Facebook and instant communications there seem to be no rules. The information was on the internet before practice was over and Brown had had a chance to contact the parents of the player. That shouldn't happen and so practice was closed.

Some may suggest just banning cell phones; but that's easier said than done. The simple thing to do is close practice. It's a shame, because if you've ever attended an Auburn practice you know it casts a completely different light on the game.