The Mocs Will Be Tough on Homecoming.

Share All sharing options for: The Mocs Will Be Tough on Homecoming. 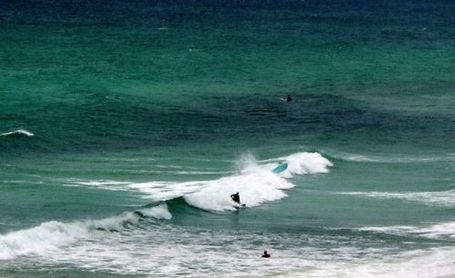 We’re so worried we’re surfing in a tropical depression!

War Eagle, everybody! It’s time now for a preview of Auburn’s Homecoming opponent, the University of Tennessee-Chattanooga. While I’m sure you’d enjoy reading "Advantage: Auburn" a dozen times today… Your humble Auburn correspondent is currently at Ft. Walton Beach, and is enjoying the high seas. Yes, that is my blue board catapulting out of the surf in that shot above. I’m somewhere below, scraping my face along the sand and inhaling a gallon of seawater. It’s been a blast today, though. We haven’t had waves this good at the beach since Hurricane Ivan!

Sand castles, margaritas and spectacular wipe-outs aside, I would like to offer a little info on the Mocs. Like most folks, I saw this game on the schedule and remembered the ridiculous 76-10 win over UTC back in 1995. Terry Bowden was TRYING to hold the score down, handing off to the reserve fullback every play. 4th team guy Cencade Pennington broke off a long TD late, up the middle for the final TD. UTC’s record from 1996 to 2008 was 47-99. Former Auburn/Bowden running back coach Rodney Allison was the head man for the Mocs from 2003 to 2008, and compiled a record of 17-51.

Enter current coach Russ Huesman. In 2009, the Mocs compiled a record of 6-5, and hope to move on to the FCS playoffs this season. It will be a tough road, as UTC hosts FCS powers Appalachian State and Georgia Southern, as well as traveling to Furman and OVC favorite Jacksonville State. The Mocs return 41 lettermen and 18 starters from the 2009 campaign. UTC returns junior quarterback B. J. Coleman, who is a 6’5" gunslinger with a good arm and experience. He’ll operate behind a veteran line with talented receivers and a lot of returning backs. Where UTC took blows from graduation was on the defensive line and the front seven in general.

I think Auburn will whip the Mocs on homecoming, and the visitors will have a lot of trouble with a deeper Auburn offensive line. Repeating a 76 point finish isn’t out of the question, but I think the score will be more along the lines of the Auburn-Furman game of 2009. The Moc offense will give Auburn’s reserves trouble. Prediction: Auburn wins this one 59-30.

There have been a few surprises in fall camp so far, and thus far no serious injuries. DeAngelo Benton’s broken finger(s) probably are the most troubling. I was really rooting for him to get into the mix. It will be difficult considering the amount of talent out there practicing. Get well soon, DeAngelo.

I think the biggest surprise is that Darren Bates is apparently running as the first-team Sam linebacker. That does make me nervous, as I’m wondering how a former safety will do coming off the block of a tight end or pulling guard. I know it has been done recently at Auburn, as the 2005 defense was pretty good with ultra-lightweight Karibe Dede holding things down on the strong side. Still, I’d expect plenty of reps for Jonathan Evans on obvious run downs. My guess is that Gene Chizik is expecting Bates to cover tight ends and H-backs. We’ve been REALLY vulnerable to short passes to those guys for quite some time. Here’s hoping Bates is the answer, and we don’t get pounded to death inside, instead.

With crossed fingers, I’m enjoying the news at safety, but worrying about the secondary just the same. It appears that all three safety seniors are ready to go physically. A veteran line-up will be a boon. My worry is at corner. I think Demond Washington and Neiko Thorpe will be pretty good. T’Sharvan Bell will be a solid nickel/backup. An injury here  could spell disaster.

There’s apparently quite the punting race going on between senior Ryan Shoemaker and incoming freshman Steven Clark. This can only help the team, however it turns out. I wouldn’t be surprised to see newcoming kicker Cody Parkey kicking off, either. If he can consistently reach the end zone, that would be a massive upgrade over the past three seasons.

Any notion after spring drills of penciling in JUCO transfer Brandon Moseley at right tackle seems to be premature. By all accounts, there is a three-way war for that starting job between Moseley, fellow JUCO Roszell Gayden, and sophomore John Sullen. Again, may the best man win.

In the backfield, we appear to be set with a three man tailback rotation of Mario Fannin, Onterrio McCalebb and Michael Dyer. The fullback/H-back spot seems to be gravitating towards junior Eric Smith and the 285 pound freshman Ladarius Phillips.

One of the more intriguing races is the one for backup quarterback. There’s been a buzz about sophomore Barrett Trotter in recent days. Meanwhile, senior Neil Caudle and freshman Clint Moseley are trying out for holder. Draw your own conclusions…

It’s great to be fighting through the August drills, because that means that football is just around the corner. Here’s to Auburn staying injury free, and developing into a championship team. We’ll be back with a more traditional preview of the Georgia Bulldogs next Thursday!