Share All sharing options for: 2004 National Title Update and Beatification of Auburn Ascension 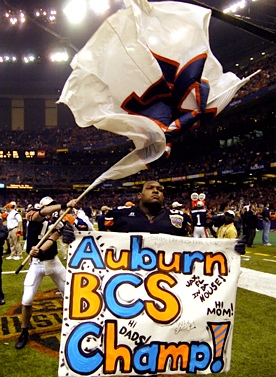 Wait. Maybe the politicking's not quite over.

While USC's hopeless appeal of NCAA sanctions winds it's way through the process, the dust has been settling in the almost two months since the ineligibility of Reggie Bush caused USC to vacate their 2004 BCS and AP national championships. Jay Coulter gave his opinion right before the announcement, and yours truly has been on record both recently and a while back, making no bones about why Auburn should rightfully be awarded the 2004 national championship retroactively (which if that's how you count them, half the titles in CFB history have been awarded). With some new developments, here's a little update on what's been going on.

The AP Poll:  Has already stated that their 2004 champion will remain USC no matter what the results of the sanctions nor the appeal. This is very disturbing to me, as the AP ended it's affiliation with the BCS seemingly in large part due to the prominence of their poll results being utilized in a system that shut out a quality team like Auburn. While many think that the AP's time in the sun has long faded, I still hold great regard for the institution and can't understand why they wouldn't call for a re-vote. Regardless, they're not the only media poll game in town, as forty other miscellaneous polls voted that year, too. Perhaps a preponderance of other minor selectors could sway hearts and minds?

The BCS title: While USC concedes the entire 2005 season was a fraud and has indicated that they will return Bush's Heisman trophy from that year (which will almost certainly remain vacated) they still contest his eligibility in the last two games of the 2004 season, against UCLA and of course, Oklahoma, that won them the title. Fat chance. The BCS has already indicated that they will vacate the crown and not elevate another team, as their bylaws do not allow them to do. But might times be right for a change? The BCS is governed by eleven college presidents, who by nature are very conservative, but who might also consider action to protect the reputation of the BCS (no snickering). Enter input from an old friend:

Hey, the man is on a roll. Why stop him at the Big 12 media days last week?

"Why in the world would you not give it to somebody? Oklahoma, us, Utah? It doesn’t make any sense,"  Tuberville said."Everybody played that year. So you give it to a team that wins it on the field – uh oh, they cheated. They broke rules. We’re gonna take it away from 'em. Well, give it to somebody. Because there’s other teams that did the right things that were there."

If you caught the new Texas Tech coach still referring to Auburn as 'us', well, you now know that he still loves us deep down inside--at least six finger's worth. Bless you coach, even if you may still get a retro-active $300k bonus for winning a MNC that was in your contract. Hell, Jimmy Sexton and I both echo cha-ching on that one.

So with the AP and BCS chances of elevating us looking slim, it seems we have one more ace in the hole to play, and the chances might be looking good. Although overshadowed by the prestige of the AP and BCS, the Football Writers Association of America (FWAA) is a nationally respected group awarding MNCs since 1954 and has the clout to make a title bestowed by them have some cred.  Steve Richardson, the executive director of the FWAA, will compose a panel, including at least 15 past presidents, and give give Auburn an honest shake:

"I wouldn't say we're definitely going to do that, but it's a possibility," Richardson said. "As we survey the scene, we have an opportunity to consider for the first time of vacating, in the modern era, a national championship."

Richardson said he feels in talking to past FWAA presidents that USC could be in trouble. "I'm sensing that people, when they look at the situation, that is a distinct possibility that Auburn thing can come into play," he said. "I haven't had anyone convince me why we shouldn't do it."

And who if anyone, is one of these former FWAA presidents who might be called to weigh in? Why, Mr. College Football himself, Tony Barnhart, of the AJC, who considered the subject last week. While Tony posed the question tactfully for his readers to answer, I think I know what his personal opinion would be. Heck, yes. Give it to Auburn.

So if the FWAA decides to change their champion for 2004, I say many of the other minor selectors do the same and then a groundswell of public opinion emerges to embrace Auburn for their ascension, albeit retroactively, so that they may claim their crown for the record books. Hopefully we'll do it with little fanfare. As I've always said, NO ONE wants to win it like this, but win it we will and claim it we should. With the terrible ambiguity of national championships claims in FBS for literally 100+ years, we'd look like chumps for not doing it. Tuscaloosa may gripe and whine, but in the absence of Auburn having their own Wayne Atcheson, Gumps wonder deep down in their little crimson hearts why we haven't already done it.