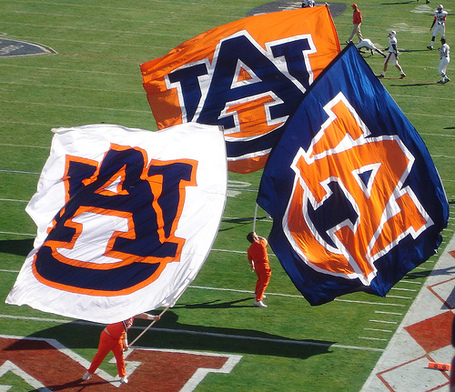 I have had several discussions this weekend about Auburn's preseason ranking in the AP(#22) and the Coaches(#23) polls. I've heard arguments from "not getting any respect" to "way overrated". Some say it's too early to tell if Auburn is going to be good this season, and of course the occasional Tide fan giving his honest and open minded (read skewed beyond reason) opinion.

I thought it would be better to look at the last time Auburn was in a similar situation, and without trying to explain what I found, why don't I just show you.

In 2002 Auburn finished with record of 8-4 and was 5-3 in league play. The Tiger offense was prolific that year tearing off 5,308 yards. While the overall record is similar, the SEC mark was a winning record, which is not at all what Auburn produced in 2010 while going 3-5 in SEC play.

That season also saw Auburn go 3-1 against top 10 teams with a Bowl game win against Big 10 power Penn State. Auburn played three teams in league contests that were ranked in the top 10 and they were..

This past season the Tigers only win against a ranked opponent in the regular season was against the Ol' Miss Rebels who were ranked 24th coming into the contest.

In 2003 Auburn started the season ranked 6th in the country. A ranking that was to be short lived. An opening loss to #6 USC and the cookies started to crumble if you know what I mean. The Tigers rebounded and finished off at 8-5 with a league record of 5-3. The Tigers got hammered by LSU that season, and lost two in a row to Ol' Miss and UGA before squeaking by Bama 28-23. Auburn finished the season with the obligatory thumping of a Big 10 team, this time Wisconsin by a score of 28-14.

The offense racked up 4,891 total yards, which seems great but a closer look at the special teams shows a Kick off return average of only 19.4 yards  And, a Punt return average of a paltry 10.0 yards. Plus the team averaged over 50 yards per game in penalties!

There are some similarities from the 2002 and 2003 seasons that look an awful lot like 2008 and 2009. Not a total mirror image, but enough that it caught the attention of this writer when thinking of the possibilities that may be in store for 2010.

Do you believe in miracles?