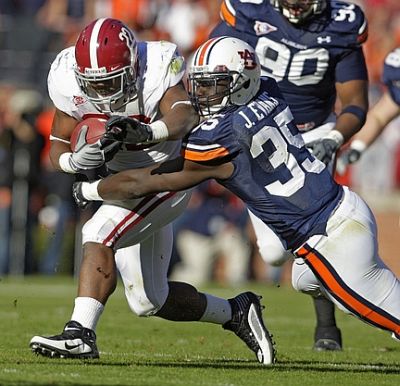 War Eagle, everybody! It's time now for the last of our previews for the 2010 Auburn regular season. Today's topic will be the Iron Bowl, which is to be played on Black Friday (November 26th) in Tuscaloosa on CBS television at 1:30 PM. The Tigers' last trip to Bryant-Denny Stadium was an unmitigated disaster, and this year's team hopes to produce a far different outcome.

Alabama won the SEC title last season with a convincing win over Florida in the championship game. The Tide then went on to defeat Texas in Pasadena and become the consensus national champion. The Tide seems to be the nation's favorite to win it all again this year. In the first coaches poll of this season, Alabama received 55 out of 59 first place votes. That's pretty amazing, considering that Alabama lost ten starters on defense!

A wholesale rebuilding effort is still underway on the practice fields in Tuscaloosa. The new defense has taken some lumps in practice this fall, but don't expect this unit to be a pushover by November. There is a lot of blue-chip talent being groomed. Even if junior starting end Marcel Dareus is ruled ineligible by the NCAA, the Tide has about ten linemen who can play at a high level. There are some serious questions about the Tide secondary, where only junior safety Mark Barron returns, but the Tide should have a strong front seven with a devastating pass rush.

Early on in 2010, Alabama will rely upon a veteran offense. The Tide lost two linemen and a tight end to graduation, but 8 starters return on a unit that ground defenses into hamburger in 2009. It's a unit that produced two All-Americans and a Heisman Trophy. Senior quarterback Greg McElroy is undefeated as a starter, a streak that includes his high school days. McElroy hands off to the most explosive backfield in the SEC. Junior Heisman Trophy winner Mark Ingram returns, as does his sidekick, sophomore Trent Richardson. Some folks are of the opinion that Richardson is more talented than Ingram is. Richardson may be faster and more powerful, but Ingram has a big edge in vision and patience. Ingram knows where his blockers are and utilizes them well. When Alabama does pass, they have a good receiving corps led by junior Julio Jones.

Bama faces lots of questions on their special teams this season. The Tide lost All-SEC kicker Leigh Tiffin, 4-year starting punter P. J. Fitzgerald, and return man extraordinaire Javier Arenas. In addition, the Tide had kick coverage woes they hope to shore up this year. Alabama may use two kickers this year, and will likely field a freshman punter. Return duties may be handled by Mark Ingram and Trent Richardson on kicks, and Julio Jones will field punts.

Auburn corners vs. Alabama receivers: Auburn returns veteran corners Neiko Thorpe and Demond Washington, as well as backup T'Sharvan Bell. Last Iron Bowl, Auburn coverage limited Bama wide receivers to 9 catches for 83 yards. All of those catches were made by Julio Jones. What the stats don't show is how many times Jones pancaked an Auburn corner or drove his man completely out of bounds. While some writers wonder whether Jones is an elite SEC receiver, there's no doubt that he's a devastating blocker. Bama has other good options at receiver, of course. Juniors Marquis Maze and Darius Hanks return, and there's talent all the way down the depth chart. Advantage: Alabama.

Auburn safeties vs. Alabama secondary receivers and quarterback: Auburn looks to be going with the senior tandem of Aaron Savage and Mike McNeil as starters this fall, and Zach Etheridge may play a big role also. There are a LOT of starting snaps and big plays among that bunch. It's a far cry from the all-newcomer unit of Demond Washington and Darren Bates that played in the Iron Bowl last year. As noted above, Auburn didn't cover Bama's secondary receivers well. Alabama loses receiving phenom Colin Peek, but the tight end tandem of Preston Dial and Brad Smelley should be fine. Where Alabama was great in the Iron Bowl was offensive management. Quarterback Greg McElroy was unflappable, and directed a patient attack that did not have a single turnover. This season, it's going to be experience vs. experience in this matchup. Advantage: Even.

Punting: Auburn's probable starter at punter is senior Ryan Shoemaker, who was a freshman All-SEC in 2007. Shoemaker sports a career 41.5 yard average, but he's being pushed in fall camp by incoming freshman Steven Clark. Alabama used walk-on freshman Zach Goehler in the A-Day game, and the results were less than spectacular. Look for incoming freshman Jay Williams to win the job. Auburn appears to be set to go with Quindarius Carr as a return man. He's got no game experience. Alabama goes with Julio Jones, who averaged 15 yards per return on 5 attempts last year. Alabama's coverage unit gave up 9.2 yards per return, Auburn's gave up 12.9. Auburn could be substantially better this year at both coverage and returns, but we have yet to see it on the field. Advantage: Alabama.

Kickoffs: Auburn senior Wes Byrum appeared set to manage the kickoff duties in 2010, having posted a career 62.4 yard average on 83 kickoffs. This week, it was revealed that it's still a three man race between Byrum, walk-on Chandler Brooks, and incoming freshman Cody Parkey. True freshman Cade Foster has a strong leg and should handle kickoffs for Bama this fall. Both teams are fairly set on returns. For Auburn, the starters will be Onterrio McCalebb (24.7 yards per return) and Demond Washington (31.1 yards). Alabama will likely use some combination of Julio Jones, Mark Ingram and Trent Richardson. Jones had one return for 12 yards last year, and neither of the other two returned kicks. Alabama and Auburn both had coverage problems. Alabama gave up 25.1 yards per return and two touchdowns. Auburn gave up 23.5 yards per, and one touchdown. Advantage: Auburn.

Place kicking: Auburn returns senior Wes Byrum, who's coming off a near-perfect year, hitting 14 of 15 field goals and all of his extra points. Alabama must replace Leigh Tiffin, and is looking at possibly playing two kickers. Sophomore Jeremy Shelley is accurate, but hasn't shown enough leg for anything outside of 35 yards. Incoming freshman Cade Foster can boom the ball a long way, but has had consistency issues. Advantage: Auburn.

Auburn offensive line vs. Alabama defensive line: Auburn has some fearsome linemen up front, and a lot of starts over the past four years. Seniors Lee Ziemba, Byron Issom, Mike Pugh and Mike Berry are all all-star candidates. The right tackle spot appears to have been nailed down by junior A. J. Green, a converted defensive end who has rocketed up the depth chart in recent weeks. Should Green struggle, sophomore John Sullen is a possibility, or possibly the pair of JUCO transfers that held the position this past spring. SEC offensive lines may be breathing a sigh of relief that they no long have to face Terrence Cody, but this year's Bama line isn't going to be any picnic. Senior end Luther Davis has 3 letters, and has played a lot of football. On the other side, junior Marcel Darius is a weapon. Another end to watch is sophomore Damion Square. At nose, Bama is planning to go with a rotation of junior Josh Chapman and sophomore Kerry Murphy. That's a pair of 310 pound grinders to alternate in the middle. Despite the great size, both have speed. Even into the 3rd string, this is a strong and fast line. Last year's Bama unit held the Auburn running back tandem of Tate and McCalebb to 68 rushing yards. Advantage: Alabama.

Auburn backs vs. Alabama linebackers: Auburn has a solid three-deep running back corps of Mario Fannin, along with Onterrio McCalebb and incoming sensation Michael Dyer. Eric Smith will lead the way at H-Back. Last season, the Auburn running backs managed only a 2.9 yard per carry average against Alabama. Bama lost all four starters from last year's Iron Bowl, but 2007 star Dont'a Hightower returns to lead the Bama backers. The Tide will tentatively go with sophomore Dont'a Hightower and junior Jerrell Harris inside, and junior Courtney Upshaw and sophomore Nico Johnson outside. While there aren't many starts here, these guys have played a good bit. There's depth and talent on this unit also. Advantage: Even.

Auburn receivers vs. Alabama corners: The deepest position on Auburn's 2010 squad appears to be at receiver, led by star junior Darvin Adams. Adams and Terrell Zachary had big plays against Alabama's secondary last season, and the Tide will be way less experienced this year. Thus far in camp, Alabama is having injury difficulties. By Iron Bowl time, the likely Bama corners should be sophomores Dre Kirkpatrick and B. J. Scott. JUCO transfer DeQuan Menzie could be in the mix as well. He should be fully recovered from an April knee injury by Iron Bowl time. Advantage: Auburn.

Auburn secondary receivers and quarterback vs. Alabama safeties: Auburn should have a number of talented secondary receivers, including sophomore tight end Phillip Lutzenchirchen. The Tigers often line up outside receivers in the slot, and throw a lot of passes to backs out of the backfield. There are at least a half-dozen such candidates who can break a screen pass the distance. In addition, quarterback Cameron Newton has a strong arm, and is a threat as a runner. Last season, Auburn lost the Iron Bowl in the second half due to a complete inability to hit a wide open tight end over the middle. Alabama started loading the box, and the pass was there. It was a combination of bad throws and brick hands that stalled the Auburn offense. Neither should be a problem in 2010. Alabama's lone returning starter from last year's Iron Bowl is junior All-SEC safety Mark Barron. Barron's a savvy field general with a knack for breaking on the ball He led the team with 7 interceptions, 11 pass breakups, and added 76 tackles. Joining Barron in the secondary may be junior walk-on Will Lowery, who's had a good fall camp. Advantage: Auburn.

Barring bad weather, this could be one of the highest-scoring Iron Bowls in history. Last season, Auburn used a few big plays to hold a lead most of the game, but this year should move the ball more consistently against a less experienced defense. I think Alabama will open things up earlier this season. They won't be able to afford to get way behind, and they should be accustomed to being more wide-open on offense by game 12 of the season.

It's an interesting game when both defensive lines appear to have the advantage, and a high-scoring affair is still expected. Both offensive coordinators excel at finding ways to get ball carriers loose in open space and have proven to be able to score even when the line isn't winning up front. Add in a couple of defenses that have trouble tackling in the open field, and it's a recipe for a lot of points. McElroy's coolness under fire is a proven plus for Bama, while the jury's still out on Cam Newton. On top of that, the Tide home field advantage will likely cause communication problems for the Tigers.

Alabama is using a lot of new players at the critical ball-handling special teams positions. Auburn has a significant kicking advantage, at least until we see Bama's freshman legs on the field. Both squads should improve on coverage with the infusion of talented recruiting classes.

Prediction: It's a wide-open and wild Iron Bowl with numerous lead changes. Auburn gets the ball last, and puts Wes Byrum in position at the end. Byrum nails the game winner and Auburn takes it in a stunner, 37-34!