Alabama to Have Another Preseason Game Against Michigan in 2012?

Share All sharing options for: Alabama to Have Another Preseason Game Against Michigan in 2012? 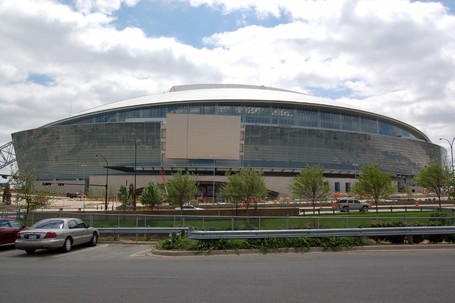 Brian at MGoBlog is claiming that a neutral-site game contract between Michigan and Alabama to be played at Jerry Jones' new Cowboy Stadium will be signed tomorrow, according to an undisclosed source. Some of the stipulations leaked thus far say that Michigan will be the home team, which counts for a little more money, and that this will likely be a one-and-done, with no home and home series forthcoming. Oh, and it also helps that Jerry Jones has allegedly "overpaid" to make all this happen.

With Notre Dame inked to play Arizona State in Cowboys Stadium in mid-season the following year, there is little doubt that Jones is going after a chunk of the lucrative CFB market. Although the Cotton Bowl Classic moves it's game to Cowboys Stadium starting this season (2011), the Red River Shoot-Out between Oklahoma and Texas will continue to be played at Fair Park in Dallas at least through 2015. Jones had originally wanted that game to be played at his house, but had to settle for the Cotton Bowl in the interim. With the move, the Cotton Bowl has applied to be part of the BCS series of bowl games. Hey, you can't blame Jones for trying. You gotta amortize that $1.15B behemoth somehow.

I have little doubt that Nick Saban and company would jump at the chance, as Alabama has recently become the stereotypical 'play em anytime, anywhere' team in many of these neutral-site contests, playing in the first two Chick Fil A Kickoff games in 2008 and 2009. I also have little doubt that neither fanbase would have any qualms about traveling hundreds of miles for a non-bowl game. The only thing in doubt is whether Rich Rodriguez will still be around to make the trip.

I've said many times that these neutral-site games are the future of high quality out-of-conference (OCC) scheduling in a non-bowl setting. With schedules made out years in advance, sometimes the flexibility of a one-and-done game is perfect to take advantage of an opening to schedule high profile teams at a moment's notice. The escalation of guaranteed payouts especially helps to make the pain of eschewing an early home game (almost always against a cupcake) a lot less painful.

With JerryWorld now clearly a player in the Kickoff Game market, they can challenge The Georgia Dome and the Chick Fil A Kickoff Game as a location more centrally suited to draw teams from the west coast and midwest. While some schools might not cherish an early September game in the deep south, both stadiums are domed, (or a convertible, in the case of Cowboys Stadium) which makes the hot weather a non-factor. Here's to looking to more of these match-ups!