Tigers Hang on in Starkville!

Share All sharing options for: Tigers Hang on in Starkville! 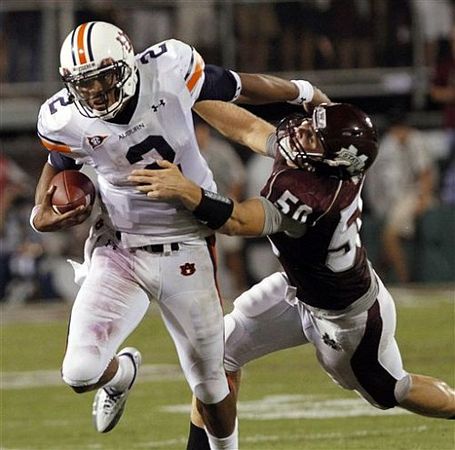 Cameron Newton has a successful SEC debut as the starting QB!

War Eagle, everybody! It's time now for some belated grades on last Thursday's Auburn visit to Mississippi State. The Tigers held on after scoring no points in the second half, and beat Mississippi State 17-14. Most folks expected a lot of offensive fireworks in this game, but that's not what happened. Instead, the teams combined for only 594 total yards and 31 points. We were treated to inconsistent passing games, with many errant passes and a number of dropped balls. The game was won by Auburn on defensive line play. In what was supposed to be a pretty even matchup, the Auburn defensive line camped out in the Bulldog backfield and made life miserable for the Bulldog quarterbacks.

The expected offensive explosion by the Tiger offense never happened. At times the Auburn offense seemed on the verge, such as Emory Blake's early break away screen reception for a touchdown. The Tigers moved the ball for 348 total yards, but regularly killed drives with penalties, errant passes, or whiffed blocks. Injuries to senior starters Mario Fannin and Lee Ziemba did not help, either. Honestly, it looked like Gus Malzhan kept the playbook simple for the second week in a row. How else to explain pounding a 180 pound tailback with footing problems into a stout Bulldog line time and time again? For the second week in a row, quarterback Cameron Newton was the leading Tiger rusher, tallying 70 yards on 18 carries. Here's hoping the injured Tigers get well, and the playbook expands for the Clemson game next weekend!

For much of the game, the Auburn front seven on defense was a FORCE. Tackle Nick Fairley shredded a double team block time and time again, tallying two and a half tackles for a loss, a fumble recovery, and an interception. Fairley also added three quarterback hurries, a conservative count. Auburn was also effective taking away the deep pass. The longest Bulldog pass of the day to a wide receiver was only 17 yards to Chris Smith early in the first quarter. When the game was on the line at the end, it was the Auburn defense that came up with the game-winning stops.

Auburn special teams took a step backwards in this game. Ball security woes returned on the punt return unit, as Quindarius Carr attempted to field a punt in traffic, fumbled, and gave the Bulldogs the ball on the Auburn 20 yard line. The Bulldogs would score a few plays later to tie the game. A Wes Byrum field goal attempt was blocked in the 4th quarter. The Tigers allowed Leon Berry a 31 yard kick return to start the second half. That momentum carried the Bulldogs to an opening drive touchdown. It wasn't all bad on special teams. The Berry return aside, kick and punt coverage was pretty good. Wes Byrum averaged kicking off to the 3 yard line. Ryan Shoemaker consistently pinned the Bulldogs deep with his towering punts. Only one of his four was even returnable.

Defensive Line: A-. I counted off on a few runs up the middle that gashed Auburn. One of these was a shovel pass up the gut off a sprint option. Also, when MSU went to flexbone look for a while, fullback Patrick Hanrahan smashed for 21 yards on 3 carries. Why the Bulldogs abandoned this attack, I have no idea. We certainly had no answer for it! Largely silent against ASU last week, Zach Clayton, Michael Goggins and Mike Blanc all turned in fine games, as did some of the true freshmen reserves in limited minutes. Nick Fairley and Antoine Carter were at times unblockable in this one.

Linebackers: B+-. We still need Craig Stevens out there to get us lined up correctly, but the linebackers held their own pretty well. Eltoro Freeman led the team in tackles with 9, and Josh Bynes added six. Bynes had an absolutely critical stop for no gain on a shovel pass late in the game. The Bulldogs had burned Auburn with it earlier, but the second time Bynes was waiting on it.

Secondary: C+. You have to credit the Auburn secondary for not giving up any play longer than 22 yards, but we were still out of position at times, and are still giving up too much cushion on the edges. Some of that was likely the scheme. The Bulldogs did try to hurt Auburn like ASU did, with quick passes to the outside. They only completed about one in four of those, which won't consistently move the chains. For every caught ball, there was a drop, a wild throw that had no chance, or an Auburn defender actually in position to make a play. We're still not consistent at all in our coverage technique.

Punting: B. You'd like more distance, as Ryan Shoemaker managed only 39.2 yards on 4 kicks. However, two of those were downed inside the 20, and only one was returned for 4 yards. That's a decent night.

Punt Returns: D. The biggest error here was the fumble by Quindarius Carr, but that wasn't the only thing wrong. The blocking again was lacking. Out of seven punts by the Bulldogs, Carr only successfully fielded one for 11 yards. Even if he has to fair catch every one, we can't turn it over, and we don't need to let them hit and roll.

Kick Returns: C. Demond Washington had two pretty nice returns for a 32 yard average. However, the return team was caught asleep on the onside kickoff after the second half score. While we can argue that perhaps the ball didn't go ten yards and the play should have been reviewed, you can't let teams that have just scored do that.

Place-kicking: B. Wes Byrum did provide the winning margin on a second quarter field goal. We had a field goal attempt blocked in the 4th quarter. It was a long attempt, and the trajectory on those is lower by design. However, it's fair to say that the interior line just flat opened the gate on that play. We've got to shore up our blocking here.

Offensive Line: C+. I've seen rave reviews of the Auburn tackle play in this game, so much so that I have to wonder if I actually saw the same game. From my perspective, no one could control Bulldog end Pernell McPhee. Ziemba was having trouble with him before the injury, and A.J. Green REALLY had his hands full when McPhee lined up on the strong side. Ziemba's replacement Brandon Moseley was ok on run blocks, but had the corner turned on him by Bulldog ends in pass protection. Ryan Pugh had a solid game, but we missed too many blocks from the guards.

Receivers: B. Blocking by the receivers wasn't nearly as good in this game as in the ASU game, but we did better as far as not dropping the ball. Darvin Adams made a great catch on a high ball in the end zone. Kodi Burns did a nice job on the throwback pass, lofting it over a defender and giving Cameron Newton room to run.

Running Backs: C+. It's never a good sign when none of the running backs can out rush the quarterback. Here's my vote for seeing a lot more of Michael Dyer next week. One of the knocks against Dyer is pass protection, but I didn't see much better from McCalebb or Eric Smith. The lead blocking by Smith in this game was one of his worst. Onterrio McCalebb seems to be having an ongoing traction problem, frequently tripping over yard lines. With this problem, AND his small stature, I really don't understand running him into the line repeatedly. With the injury to Mario Fannin's shoulder, we are really getting thin at tailback. Here's hoping Mario recovers quickly!

Quarterback: B. Newton survived his first SEC road start with only one turnover, and that one was a deep bomb to the opponent's end zone. While it shouldn't have been floated into double coverage, it was hardly a critical mistake. I could trot out the "same as a punt" sentiment. Newton had some missed throws, but he also made a few. While the miss out of bounds at the 5 to a wide open Jay Wisner hurt, there was the quick screen for the early score, and the dart to Adams in the end zone. Newton also checked down successfully to Zachary several times on the come-back route. Even though it wasn't a banner day, Newton hit 57 percent of his passes for 7.1 yards per pass. Add in 70 more rushing yards, and it's a decent day for his first start against BCS competition. Newton did tally 228 total yards. Other first timer Auburn quarterbacks in the past decade haven't done so well. There was Jason Campbell's 4 fumbles in the Carrier Dome, and Brandon Cox's 4 picks against Georgia Tech, for example. Newton took the trip to Starkville against a good Bulldog team, and won. This quarterback is a keeper!

Despite the closeness of the victory, a win is a win. This team is still improving, and has a great chance to take a further leap against Clemson next Saturday. A defense that can hold on and win a game is a luxury that we did not have last season. Here's hoping that the secondary coaches work the entire week on man coverage. We'll face a dangerous gunslinger in Kyle Parker, who was an All-American in two sports last season. The Auburn defense will have its hands full with Dabo Sweeney's offense.

The offense needs to open up the playbook for the next two games. Clemson should be pretty confident coming in to Jordan Hare, and frankly South Carolina looks like the best of the SEC East, at this point. The next two weeks will really determine if we have a New Year's Day Bowl kind of season, or a Liberty/Independence disappointment. I'll repeat my earlier request that we see a lot more of Michael Dyer this week. If Marcus Lattimore can put up 188 against Georgia, I think Dyer can as well. They are running backs of a similar caliber. War Eagle, and beat Clemson!