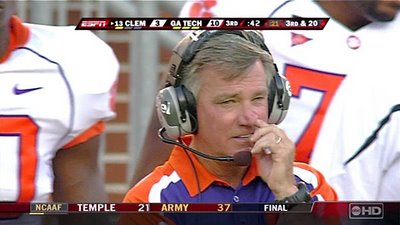 Clemson's Idea of a Pick 'Em

It is indeed rich when the commissioner of our league (me) puts a notice out reminding everyone of the early game Friday evening (Hillbillies versus smaller Hillbillies with a Movie) and to have your pick in for that one by 6pm CST, then promptly forgets to make my own picks until 6:03. Actually, someone did, too, but that doesn't make me feel any better. No loss, really, since I would have wrongly picked WVU to cover.

Luckily, being the kind commissoner that I am, anyone missing one pick (which can be made or changed up until 5 minutes before game time) is not in danger of having the rest of their picks locked out for that week, like what happened to me in Fanblog's straight-up league. Guess I should pay attention to those email reminders I willingly signed up for.

HOWARDS ROCK, an obvious Clemson fan, won last week with a score of 18. Let's hope he's wrong with his pick this week unless he picks Auburn to cover. With our league throwing out one's two lowest weeks, basically your score right now is your best week out of the two so far. With that in mind, the rest of the standings going into week two are as follows: