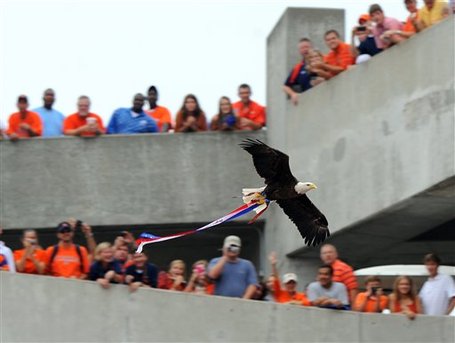 When Spirit soars, you know it's game time!
Auburn vs. Clemson open thread

War Eagle, everybody! It's game day again! Tonight, Auburn hosts the Clemson Tigers at Jordan Hare Stadium. It's ESPN's top matchup of the week, where two promising teams from different BCS conferences will meet. Both teams hope to do their conference proud.

This should be another hot, muggy game. The summer of 2010 just won't end. The temperature should remain in the 80s the entire contest. It will be interesting to see how different the crowd looks this week. Auburn head coach Gene Chizik has asked the fans to support the team in "true blue" fashion, wearing all blue to the game. After more than a decade of a majority of orange-clad folks in the stands, it may be interesting to see.

As always, feel free to chime in on this thread. We'll be here tonight, cheering our Tigers on! War Eagle, and pound Clemson!