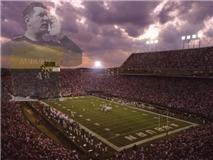 The spirit of the greatest coach in Auburn Football history is still felt on the Plains.

Heisman, Donahue, Dye, Bowden, Tuberville ... all were successful Auburn coaches whose names invoke memories of past gridiron glories. As great as they were though, none was as great as Auburn's twenty first head coach. None gave more of their life, their fortune, and their service to Auburn University as Ralph "Shug" Jordan. He was the quintessential Auburn Man, having dedicated the bulk of his 69 years on this earth to serving Auburn. This Saturday September, 25th will be the 100th anniversary of his birth.

It is fitting that his beloved Tigers will be playing his wife Evelyn‘s former school, the University of South Carolina, on this day. It was on a basketball coaching trip to Columbia that the two met. They later married and had three children: daughters Susan and Darby and son Ralph,Jr. Coach Jordan always considered his family his greatest achievement. Today Ralph Jr., carries on the Auburn spirit of his father. Jay Coulter, Editor of Track Em Tigers said that, " Ralph Jr.,  is the finest ambassador that Auburn has at it's disposal."

His father Ralph Sr. grew up in Selma, the son of a railroad worker and was a multi talented athlete at Selma High. Following high school, he began a life long love affair with Auburn University. At Auburn, Shug was a star basketball player, center on the football team, and left handed pitcher for the Tigers. He lettered in all three sports. In 1932, he was voted the Most Outstanding Athlete at Auburn.

That honor is even more significant when one considers that he played with the "Phantom of Union Springs," Jimmy Hitchcock, Auburn's first All American. After graduation he was hired as head basketball coach (12 seasons), head freshman football coach, and was an assistant coach for varsity football. Some are surprised to learn that Shug was head basketball coach long before he was head football coach. He is fifth on the list for most wins at Auburn.

He only left the school two times and both of those decisions speak volumes about the kind of man that was James Ralph Jordan. The first time he volunteered to serve his country in World War II. He served in both the Pacific and European theaters and was involved in some of the fiercest battles of the war. He earned a bronze star and a purple heart for wounds received at Normandy on the D Day invasion of France.

After being discharged from the army with the rank of major, Jordan returned to coach at Auburn. It was law at the end of the war that employers had to rehire returning veterans. There were reports that this created tension with the other Auburn assistant coaches. Therefore rather than cause problems, he left for a short coaching stint in the pro's before taking the head basketball coaching job at Georgia. The move also gave him the opportunity to be on the staff of legendary football coach Wally Butts.

Jordan returned to Auburn in 1951 to take over a football program that had not had a winning season in five years. The rest of the story (as they say) is history. He was a Hall of Fame coach that took his team to 12 bowl games, produced 176 wins in 24 seasons ( making him the winningest Auburn coach in history), a National and SEC championship, a Heisman Trophy winner, an Outland Trophy winner, a slew of All Americans, was named National Coach of the Year, named SEC Coach of the Year four times, and was the first living coach to have a football stadium renamed in his honor.

Auburn Football may have had it's genesis under George Petrie, but it was under Ralph Jordan that it grew to maturity. Jordan-Hare went through three expanions during his tenure, tripling in size, increasing by over 40,000 seats. And he was the man that put Auburn on the map as a national power. Every coach after him (and rightly so) is measured by the yard stick that is Ralph "Shug "Jordan.

After stepping down as head coach, he served on the Auburn University Board of Trustees for five years before his passing on July 17, 1980. He succumbed to leukemia after having given most of his life to the University he loved.

Shug Jordan may be in heaven today, but a part of him can be felt in the buildings and grounds on the Auburn campus and in the stadium that bears his name.  His competitiveness, his gentlemanly persona, his legacy, and his influence lives on in the players he coached, and in the lives he touched. Happy 100th birthday Shug!

. . . This Saturday, on his birthday, I hope his Tigers win one for "The Coach."