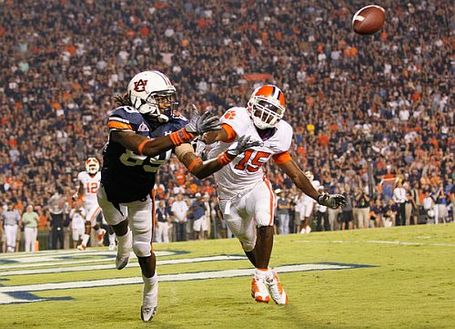 The good teams chunk it downfield!

War Eagle, everybody! Can you believe we're a quarter of the way through regular season college football already? You wouldn't know it by the weather. It still feels like July outside. It's time now to take a look at where the SEC teams are. Like last season, I'm going to trot out my favorite made-up stat, net yards per pass. To review, this stat charges a quarterback 50 yards for each interception, a penalty that reflects the average lost field position. The average score is around 6.0. The stat is a pretty good indicator of what kind of won-loss record the team will have. This is what last year's regular season looked like at the end:

Statistically, you can see that the only quarterbacks that were really an exception to this trend were Ryan Mallett, and to a lesser extent Chris Todd. Auburn and Arkansas suffered through sub-par defensive seasons, which hurt their won-loss records. Even so, we ended up with the number 2 and number 4 quarterbacks playing in Atlanta in December. Now, let's take a look at what we have through three games this season:

At the top of the leaderboard, it's the usual suspects: Greg McElroy, Ryan Mallett and Mike Hartline. Wait... Hartline? It's still early in the season, and some teams like Kentucky haven't played a conference game. Georgia and Mississippi State have already played two league games and lost both. LSU continues to win without lighting it up in the passing game. Vandy's Larry Smith appears to have improved this season. The Mississippi State duo's pick-throwing ways have them mired at the bottom of the standings. Auburn's Cameron Newton has started out 4th in the league, which is easily the best of the new SEC starting quarterbacks.

In Auburn news, it appears that Mario Fannin has been green-lighted to play against South Carolina. Other injury news isn't as good. It's already Thursday, and the coaches don't seem to know who's going to start at right tackle, John Sullen or Brandon Moseley. I figure Sullen will get the start, and Moseley will wear his number 84 jersey. Moseley is the defacto number two tight end, and has played a lot of snaps there this season.

We'll have a South Carolina open thread up by 11:00 AM Saturday, so feel free to chime in and enjoy the fun. There won't be a game play by play (unless someone else does it!) for the next two games, as I'm heading down to Auburn to see the game live. I am so fired up that I don't know how I'm going to make it the 60 or so hours till kickoff!