Tigers to Feast on Poultry Again

Share All sharing options for: Tigers to Feast on Poultry Again 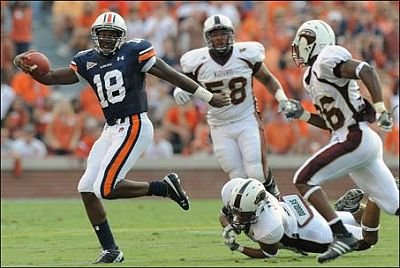 The Tigers should snack on the Warhawks.

War Eagle, everybody! It's ULM week in Auburn, and it's time to tune up for the middle of the SEC season. (Insert prattle about not overlooking the Warhawks here!) The ULM upset of Alabama in 2007 is ancient history in college football, but there was a development a couple of weeks ago that has relevance. The Arkansas Razorbacks only led ULM 7-0 at the half. That suggests that the Warhawks are a team that can hang around with big SEC teams. Arkansas was determined to work on their running game, and ULM held 'em to 99 yards on the ground. On the other hand, Arkansas is 104th in the nation in rushing, and may not be able to run on anybody. On the field, ULM lost to Arkansas 31-7, lost to Arkansas State 34-20, and barely got by Southeastern Louisiana 21-20. Auburn should win handily Saturday.

Having not gotten enough of US-280 traffic this past weekend, I'm going to be heading back down the road Saturday morning to attend the ULM contest. I'm looking forward to an easier game. I think Auburn should handle it much like the Furman game a year ago. Let the playing rotation guys work on fundamentals for a half, then turn it over to the reserves. We hated giving up 30+ points last year to Ball State and Furman, but those reserve minutes are paying dividends this year, in the form of more depth. Let's hope the starters can open up a suitably lopsided halftime margin.

SEC stock report, after the jump!

After last weekend, every SEC school has played at least one conference game. Some schools have played a pretty tough slate, others have feasted on cupcakes. I'll rank each division subjectively, with no real criteria other than just what I think about the team's chances.

Florida: After spending the first three games toying with tomato cans, Florida demolished an unbeaten Kentucky team in the Swamp, 48-14. until the SEC opener, Florida had shown a fairly salty defense, and a putrid offense. Against Kentucky, at least, Florida looked like an Eastern Division champ is supposed to look. If the Gators move the ball like that on Alabama, we'll pencil them in for an SEC title this year.

South Carolina: The Gamecocks came up short in Auburn last weekend, but this is still the second best team in the east right now. South Carolina controls its own destiny, but may need an upset win over Alabama to keep pace with the Gators. They'll get an off week to plan for the Tide. Three games will decide Carolina's fate: Alabama and Arkansas at home, and Florida on the road. The Gamecocks have already beaten Georgia, and should have little difficulty dispatching Kentucky, Vanderbilt, and Tennessee.

Georgia: Despite an 0-3 start in the SEC, Georgia still has the talent to compete with anyone in the league. The concern is the team's mental state. Following a trend from the last five seasons, Georgia is prone to penalties, turnovers, and red zone gaffes. Much Bulldog woe has been self-inflicted. I can remember a similar Bulldog team from 2006, that had a freshman quarterback and lost to both Kentucky and Vanderbilt. That team came on late in the season, and my Tigers suffered a 22 point loss at home to those Bulldogs. If the pressure on Mark Richt forces him out before the end of the season, the Bulldogs could complete the melt-down. History says that Georgia will improve as the year goes on. At 0-3 in the league, they will be a landmine in any opponent's path going forward.

Kentucky: After losing Micah Johnson and other stout members of the Wildcat front seven to the NFL this year, I expected Kentucky to have defensive problems this season. After the Wildcats allowed 28 to Western Kentucky and 48 to Florida, it appears to have been a correct assumption. Kentucky should still qualify for their fifth straight bowl, behind an offense that includes weapons Derrick Locke and Randall Cobb. With games still left against Ole Miss, Charleston Southern and Tennessee, the Wildcats should easily get to six wins.

Vanderbilt: Just three games into the season, Vanderbilt has already improved upon their 2009 SEC win total. Vanderbilt still has a moribund offense that will struggle to score points, but the Commodores are playing decent defense. Vandy hung with explosive Northwestern, stopped LSU's offense till the late going, then shut down Ole Miss in a 28-14 win in Oxford. To return to a bowl, Vandy must scrape together five wins against UConn, Eastern Michigan, Georgia, Kentucky, Tennessee, and Wake Forest. They'll win some of these games, but I don't see five of six, nor do I see the Commodores beating South Carolina, Arkansas or Florida.

Tennessee: This is a short-handed mess of a team. Tennessee's lone quality game was a 14-point loss to a struggling Florida team in Neyland Stadium. Tennesee's other two FBS games included a meltdown and 35 point beating at home against Oregon, and an overtime thriller with Conference-USA bottom feeder UAB. Incredibly, the Vols still could go bowling. The Vols could knock off slumping Georgia in two weeks, and then conceivably knock off their last four opponents. Those teams are Memphis, Ole Miss, Vanderbilt and Kentucky. Stranger things have happened. It's not likely, though. I suspect that the November 13th matchup at home against Ole Miss will determine who the worst team in the SEC is, most likely.

Alabama: The mighty Crimson Tide, winners of 28 straight regular season games looked vulnerable against Arkansas last weekend. The Tide had to blitz to get pressure on Ryan Mallett, but arguably has the best staff in the league at calling those blitzes and disguising coverages. With two outstanding running backs in the stable, Alabama will be favored in every contest this season.

LSU: Everyone is asking what's wrong with the LSU offense, but what's right is the best defense and special teams units in the SEC. LSU has yet to play a cupcake, either. They've got wins over North Carolina, Vandy, Mississippi State and West Virginia. At least two of those teams will go bowling. There's still plenty of time for the Tigers to trip, though, with road dates against Florida, Auburn, and Arkansas. There's also a home game with Alabama. This team won't win the division, but they'll leave a lot of teams with bloody noses, and will play on New Year's Day.

Auburn: The Auburn Tigers have made a statement by rolling up a 4-0 September record. The last three wins have come against a good Mississippi State team on the road, an ACC division winner at home, and the latest win was against what was assumed to be the team playing the best in the East. I still don't like Auburn's matchup against Arkansas, but Bama showed last week that Arkansas can be run on, and that pressure can get to Ryan Mallett. The Auburn pass rush has pounded Chris Relf, Kyle Parker and Stephen Garcia into submission. They'll take on Mallett in three weeks in Jordan Hare Stadium. Auburn is 7th in the nation in rushing. With a favorable schedule, Auburn could conceivably take an unbeaten record into the Iron Bowl. The only other road games Auburn has left are at Kentucky and at Ole Miss.

Arkansas: The loss to Alabama likely put the Razorbacks out of SEC title consideration. Arkansas still has road trips to Auburn, South Carolina and Mississippi State remaining, as well as a home tilt against LSU. All four of those teams have defenses capable of making Ryan Mallett's life miserable. It's hard not to see the Razorbacks losing at least two of those four.

Mississippi State: The Bulldogs have proved after a close loss to Auburn, and a win over Georgia that they can battle with the big boys in the SEC. Whether they can win consistently with turnover-prone quarterbacks is another question entirely. Against Georgia, the only MSU turnover was on a half-back pass. The result was a double digit 24-12 victory. The Bulldogs need 4 wins to go bowling. With Alcorn State, Houston, UAB, Kentucky and Ole Miss remaining on the schedule, I think MSU will make it to 6-6, at least.

Ole Miss: Don't look now, but Ole Miss just handled a pretty good WAC team, Fresno State, 55-38. The Rebel pass defense is horrible, but the offense is starting to click. We knew Jeremiah Masoli would have trouble early on, with little time to digest a new offense. Four weeks into the season, he's gaining familiarity. A dangerous running quarterback is something of a Houston Nutt staple. We still don't know if the Rebel D will be able to stop anybody decent this year, but the offense may keep Ole Miss in some ballgames. Ole Miss needs 4 wins to become bowl-eligible, and the only one that looks really winnable is against Louisiana Lafayette. Can the Rebels run the table against Kentucky, Tennessee and Mississippi State to get to six wins? Not likely.