Will Player Controversies be the Undoing of Mark Richt?

Share All sharing options for: Will Player Controversies be the Undoing of Mark Richt? 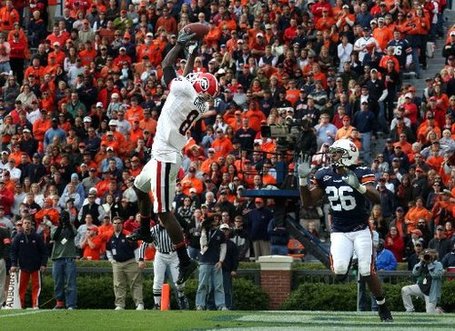 Georgia's first-team All-SEC wide-out A.J. Green was suspended by the NCAA today for an additional three games on top of having missed this past weekend's game, the result of him having sold a game jersey from last year's Independence Bowl to someone deemed an agent by the NCAA. For the record, any selling of sports memorabilia by student athletes is strictly verboten. You'd think that the Bulldogs had learned their lesson as far as hawking their wares, but perhaps that's something that has to learned the hard way in every class or so.

Georgia is appealing the decision, which seems a bit harsh by 'sentencing guidelines', especially considering his cooperation in the matter. Dawg fans think so and so do I, but the NCAA may have seen a rare opportunity with a superstar player to make a point, even if that very point is seemingly contradicted by the two-game suspension of Alabama defensive lineman Marcell Dareus last week. The NCAA referred to 'mitigating circumstances' in explaining the leniency of his treatment. This whole investigation into Green came as a result of the 'Agent Gate' episode in Miami which has snared quite a few players, including the original 'usual suspects' out of SouthCarolina who will be held out of the game withGeorgia this weekend, too, along with Green.

"I want to apologize to my coaches, teammates and the Georgia fans for the mistake in judgment," Green said in a statement. "I very much regret all that has taken place and the distraction that’s been caused. I’ve learned a valuable lesson and hope others can learn from my mistake. I can only focus my attention now on practicing and looking ahead to getting back with my teammates as quickly as possible." If you believed Green actually composed that statement, then you probably believe the red panties on the grassy knoll theory, too.

What Green did was stupid. He knew it was wrong and there simply cannot be any excuse. The fact that he owned up to it is about the only thing to his credit. You can talk about the punishment being inflicted on his teammates, but everyone plays by the same rules, superstars or scout team ballers. What really may cost Green in the long run if his suspension isn't reduced is $$$$$$$$. Projected as a possible top 5 pick if he were to come out in the draft next year as a junior, missing a quarter of the season may drop his stock significantly, perhaps forcing him to wait until after his senior season. And we all know what can happen if you don't strike while the iron's hot. Three words, kid: Lloyd's of London.

So what the heck is going on over at Georgia? Last week it became official as the talley for the Fulmer Cup came in, finishing out with the arrest of freshman safety Alex Ogletree for the theft of a motorcycle helmet. Egads! Doesn't the lad know it's legal to wear a football helmet while riding your little red Dawgscooter? Maybe tone it down with a practice helmet not brandishing the Georgia logo, mind you. Two weeks ago, RB Washaun Ealy was arrested for driving on a suspended license--after being warned by coaches not to drive until he got the matter straightened out. He was the 8th Georgia player arrested this off-season and Ogletree was the 9th. What is going on over at Athens?

Only a fool can deny the success that Richt has had at Georgia, but exactly how far has he slid as a disciplinarian? There's tons of smoke coming from that campus for there not to be a fire. Couple all these player issues with the major blunder of AD Damon Evans this summer and you have what could appear to be a program out of control. Player suspensions affect games in a variety of ways, but multiply that with the sheer magnitude and totality of what's happened in the last two months and you have all the makings of a train wreck for the Dawgs this season.

Most fans of Georgia's opponents will take the moral high ground and say that they would rather beat a healthy, productive team than one that is suffering from internal strife, but that may not be the case with Georgia's own fans. These types of malignancies have a tendency to fester until a few losses, then suddenly blow-up into a full blown cancer. Few believed that even after a sub-par 2009 season that Richt would be on the hot seat in 2010 for wins, but having a team coming off the rails with discipline problems could prove to be another matter. Let's hope not, but we'll know a lot after this weekend. As the dean of SEC coaches, Richt's earned the right to redeem himself. For now.