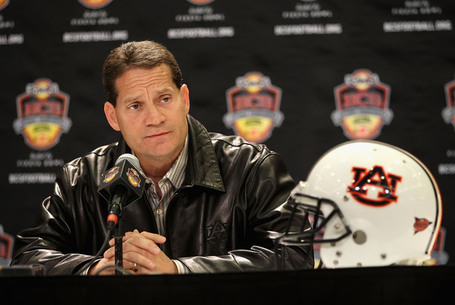 This didn't get off to a good start. Auburn's greatest crowning achievement right there on my TV and I get to spend it by myself. With the icy conditions in Atlanta and the whole southeast, all of my friends bailed on coming over for the party. I'm the kind who likes to yell and scream even while watching it on the tube but you look pretty silly if you're doing it by yourself, not to mention you scare the bejezus out of your pets, so I just sat calmly on the couch and patiently waited--anti-climatic to say the least.

I'm glad that the game was on ESPN, who's commitment to college football cannot be questioned, unlike FOX, who is merely a NFL network. If you watched the Cotton Bowl on Fox Friday night, it was terrible. Their announcers are pro guys and they have no clue what's going on in the college game and it really shows. Hell, they had to bring a guy into the booth just to explain to them--on the air--the differences in the rules between the two games. It looked really amateurish. ESPN did a fine job with College Gameday and with the telecast, save for Brent Musberger, who should be put out to pasture. I would have much preferred to see Brad Nestor or Todd  Blackledge up there, who earn their stripes every week, unlike Musberger who gets wheeled out for the big games. Hell, I even miss Vern and Gary from CBS. We saw them so much (and vice versa) this season that I almost think of them as part of the family. Somebody in the athletic department send them a small gift, would you?

I actually thought that Urban Meyer and Nick Saban did a fine job as analysts, but Nick talks too much with his hands and will never look straight ahead to the camera that's on him. That and I wish he would have given his prediction for the game. I wonder if the big wigs in Tuscaloosa suggested that he not do that? I say suggested because Nick wields absolute power over there and that even covers things like saying that Auburn will win the BCS CG in your part-time studio gig, doesn't it? Haha.

I don't really pay attention to the NFL, especially the Arizona Cardinals and I've never noticed it on any of the Fiesta bowl games, but the turf at the University of Phoenix stadium just absolutely sucked. S-U-C-K-E-D! We'll never know just how many points we lost due to all the slips and falls and I swear that Auburn players slipped on it twice as many as the Ducks did (must be the webbed feet). It looked like they were playing on the icy sheets we had back here at home. I'm not sure what they do to tend to their natural grass--I think they re-sod it after each game so it will look fresh, but it's loosely pieced together and it gives to easily. The players look like they're trying to make cuts on freshly-waxed hardwoods in their socks. Someone make a call to the Auburn horticulture department and let's see if we can get them some help. We had better footing against West Virginia last year at JHS after that monsoon hit.

I'm going to come right out and say that Cam Newton had his worst game the whole season last night. He came out shaky, which is certainly understandable given the magic in the air--but at least he wasn't as bad as Darron Thomas. I think the best remedy for that would have been a few early designed draw plays and let him take a hit--which always gets his blood pumping--or to let him scramble to the outside and just take off. With the early pressure Oregon put on him, he was hesitant to run, like the coaches barred him from it and required he stay in the pocket. That's not natural for Cam and I think he would have settled down quicker if he got a few early runs in.

And why was he sliding later in the game? On a early 3rd and short play, he barrelled over a linebacker, but he slid the rest of the game, sometimes way short of the first down marker. If he was bruised or beat up that's one thing, but it cost him a 1st down on another. In what presumably was going to be his last game in an Auburn uniform, I wanted to see him run somebody over. His passing was generally on the money, but two poorly thrown balls by him in critical moments could have put this game away early. That 4th and goal loft to Eric Smith that fell way short and that double-pump bomb to Darvin Adams that was overthrown were both sure touchdowns. Maybe he was ailing because throws like those are usually money shots for Cam. That late fumble by him was very un-Cam like as well, but as you can see, 80% Cam is still enough to win the biggest game of the year.

With the Oregon defense looking to shut down Cam's rushing, our other set of backs, Onterio McCalebb and Michael Dyer, were both set to break out. McCalebb got the early calls and had some success, even taking it up the middle once or twice. But Gus Malzahn must have seen a weakness in Oregons D-line he wanted to exploit, so we started sending Dyer up the middle in the late 1st quarter, which worked all night long, especially in the second half when we started to wear them down. I was surprised that we didn't keep running McCalebb outside just to keep them honest, but Dyer up the middle and off tackle is what won the game for us.

Overall, you can't complain about 519 total yards and a near 50/50 split with rushing and receiving. Auburn had long, sustained drives all night long but failed to punctuate them with as many scores as we would have liked. This game should have never been this close, but in typical Auburn fashion, the cardiac kids kept you on your seat until the end. Auburn is the undisputed king of the close game this year. I've never seen a team pull last second victories out so often--any CFB team. It was indeed one magical season in that respect.

Our defense reigned supreme against Oregon, as I've never seen a better effort turned in all year. To hold the #1 offense in the nation to thirty points and 100 yards under their respective averages, it was either a Herculean effort or there's just a big difference between the way that they play defense in the east and on the west coast. Nick Fairley and Company played on fire, and Oregon looked helpless against Auburn's fearsome defensive front, as they rattled Thomas and snuffed out LaMichael James all night long. James, the leading rusher in the nation, looked like a deer in headlights. I don't think he's ever seen a quicker front four than ours playing in the PAC 10, and it showed.

Thomas was shaky to begin with, throwing two quick interceptions to start the game, but Auburn was unable to convert any points off them (especially when we let them intercept one of them right back). Honestly, Thomas should have thrown 3-4 picks last night, as our defense dropped a few or slipped in route. All Oregon had by the end of the game was  wide receiver and bubble screens. We held them in check the whole game, save for that 81 yard pass and a few key 3rd and longs. Maybe it was just me but we had better results holding them on 3rd and short than anything else.

Oregon's up-tempo offense seemed to work initially, but after smashing into our tough defense the first quarter, they seemed like they wanted to slow it down at times. The biggest problem with their hurry-up was on TV and that we didn't get to watch a lot of replays or get much in the way of stats flashed on the screen--our defense seemed fine with it. Their O-line was getting pummeled and it was obvious who was winning the battle in the trenches--on both sides of the ball. The Ducks don't substitute much on offense as so not to give the defense a break but our guys were a lot better conditioned than Oregon was probably used to and it showed.

Obviously, the biggest disparity in play came with special teams, as Oregon masterfully executed one fake PAT and one punt (which we should have snuffed out if our guy hadn't slipped) AND they successfully converted another two-point conversion. For us, kickoff returns were minimal and we got zilch in punt return yards even with Darvin Adams back there fielding them. Our kickoff coverage looked strange as initially it appeared that we had no gunners down field but we were still able to quickly swallow any return they had on kickoffs or punts for that matter.

In the end, Auburn did what it needed to to pull this game out over a fine opponent. And maybe we finally answered the age-old question about defenses winning championships. In fine Florida tradition and in the words of Corrine Brown, I gratulate the Oregon Ducks on a fine season and a great game. I hope we can schedule a home and home with you real soon as a token of respect and gratitude.

One final thought for now. Although most in the conference are happy with our win and take solace in SEC pride, our detractors are now out in force now and will be making their displeasure known. Here are some of the things you will be hearing:

And on and on and on. Don't let it get to you. We are the champions for the next year and they cannot take that away from us. Stay classy, Auburn fans. Hold your heads up high because you've earned it. For our rivals, see you on the field next year! War Eagle!