Share All sharing options for: Tigers Sink the Ducks! 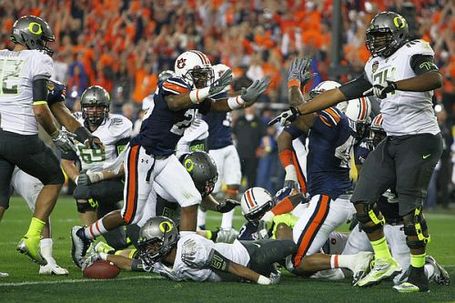 Auburn is the consensus National Champion!

War Eagle, everybody! It's time now for the Acid Reign report, on the BCS Championship Game. As has happened 13 times previously, this team came to the game ready to lay it on the line for four quarters. With 2:33 left in the game, the Tigers needed just one more scoring drive. In a year when the Tigers had already scored a school record 574 points, there was little doubt what was about to unfold. Time and time again this season, the Tigers responded with the game on the line. Late drives against South Carolina, the 19 play drive against Kentucky for the win, the 70 yard McCalebb speed sweep against LSU, and the game-winning drive against Alabama in the 4th quarter set the precedent. The Tigers inexorably ate up yardage and clock, finishing just a shade short of the goal line. The Tigers called on Wes Byrum, who has never missed a game-winning kick at the end. Byrum's finished out his Auburn career in grand style, as he calmly drilled it through to give the Tigers a 22-19 win!

Auburn's much-maligned defense took center stage in this matchup. Many folks predicted that Auburn would give up at least 40 points to Oregon's potent "blur" offense. The Tigers occasionally surrendered a big play in the passing game, but stifled the Duck ground game, holding the Ducks to 75 yards, and a 2.3 yards per carry average. Heisman finalist LaMichael James' longest run on the night was 14 yards, and he finished with only 49 rushing yards. There were a few drives, particularly in the second quarter, where Oregon really got the high speed pace going. Even as the Tigers were having difficulty getting lined up, it was clear that Auburn was on top of their defensive assignments. Sometimes they weren't quite set, but they still knew which gap to plug. The Ducks made it to the Auburn red zone five times, but only scored two passing touchdowns and a field goal.

Special teams were a worry going into this contest, but the Tigers turned in their best overall performance of the year. Wes Byrum parked every kickoff near the goal line, averaging 70 yards, and did not miss any place kicks. The Ducks managed only 16.3 yards per kick return, and 2.0 yards per punt return. Senior punter Ryan Shoemaker turned in a championship effort, with a 40.4 yard average, and 3 of his 5 punts were killed inside the Duck 20.

The Tiger offense was held well below its season scoring average, but this was still a good offensive day. The Tigers chewed up 519 yards against the number 2 team in the nation, and that's something to crow about! The pundits are saying that Oregon stopped Cam Newton, but the stat sheet reveals that Newton ran for 64 yards, and passed for 265 and two scores. I think most folks would be happy if their quarterback produced 329 yards in a championship game! The offensive star of the day was true freshman running back Michael Dyer, who ripped off 143 yards on 22 carries. It was Dyer who produced two big runs for first downs in the game-winning drive. Onterio McCalebb was effective also. The Tiger running backs averaged 6.8 yards per carry in this game.

Defensive Line: B+. This unit played lights-out! I'm going to count off a letter grade for Nick Fairley's totally unnecessary personal foul penalty against LaMichael James. That came at a critical time, as Auburn had just pushed the lead out to 19-11, and was looking for the quick stop and the knock-out punch. Instead, Oregon got out of the hole, and was able to push the Tigers back to their 20 yard line. Otherwise, this unit dominated. The line turned in a whopping 22 tackles in this contest, including 9 for losses. The Tigers were able to rotate linemen, and get good minutes out of reserves Cory Lemonier, Michael Goggins and Mike Blanc. This was critical in slowing down a Duck offense that likes to run a lot of plays.

Linebackers: B. As has been the case for much of the Chizik era, this was Josh Bynes and Craig Stevens getting it done nearly single-handedly. The two played nearly every snap. Auburn was in a nickel defense most of the night, which makes the Tigers' success against the run even more impressive. For all of the time on the field, these two combined for only 7 tackles. It's hard for a linebacker to get many tackles, when the line is swallowing runners whole for much of the game! Both guys were beaten underneath occasionally in pass coverage. Covering Duck slot receivers is a tall order for linebackers.

Secondary: C+. The Tigers did uncharacteristically snag two interceptions, but both were bad throws caused by a ferocious pass rush. Auburn's weakness all year has been allowing receivers to catch the ball in the flat, and run. Oregon got the lion's share of their 449 yards doing just that. Seven different Duck receivers gouged the Tiger defense for 374 passing yards, six of which had multiple catches. Kudos to Demond Washington for adjusting and tracking down Jeff Maehl on the 81 yard completion. Maehl got behind both safeties, but Washington closed the gap and ran him out of bounds from the opposite side of the play. Maehl had the biggest Duck play, and he caught 9 balls for 133 yards. Subtract the 81 yarder, and that's 52 yards on 8 catches. Auburn did tackle pretty well in the secondary, particularly free safety Mike McNeil. McNeil had 14 total tackles, 12 solo. Demond Washington added 7 stops.

Punting: A+. There's nothing at all to complain about here. Shoemaker hammered 'em deep when he had room, launching one 50 yards. When called on from the Oregon side of the field, Shoemaker landed three punts inside the 20. There was no room at all for the dangerous Duck return men. They managed a grand total of 6 yards on 3 returns.

Punt Returns: B. There wasn't much opportunity here. Although Oregon punted five times, they only kicked two balls that were returnable. Darvin Adams fair caught one in traffic, and let the other roll for a touchback.

Kick Returns: C-. We looked like we were running in quicksand on these, and did not block well. 18.4 yards per return is very pedestrian.

Place-kicking: A+. Wes Byrum made all of his kicks, including the pressure-filled game-winner with no time on the clock. Byrum also had four kickoffs and averaged 70 yards on those. The kick coverage unit swarmed Oregon return men very effectively.

Offensive line: B. The Auburn line did a pretty respectable job against a loaded Oregon front. Like many defenses late in the season did, the Ducks loaded the box, determined to stop Cam Newton on the mid-line runs. Auburn consistently drove the Duck linemen off the ball, allowing the Tigers to chew up 254 rushing yards. The Ducks did have 7 tackles for loss, led by end Kenny Rowe. The Tigers had difficulty keeping Rowe out of the backfield. Points off on a Lee Ziemba hold. I think it's only his second of the season, though!

Receivers: B. This was a good, but not great outing against one of the more talented secondaries in the nation. Most of Auburn's success came from patient throws underneath. Terrell Zachary led the Tigers with 6 catches. Auburn exploited the Ducks several times throwing the wheel route to slot receiver Emory Blake against a linebacker. It paid dividends on the final drive, as the Ducks were forced to go nickel, and weren't able to stop the Tigers on the ground on that drive. I enjoyed seeing Kodi Burns get the pass in the open field. That play has been there all year, and I wondered how well a safety could come up and tackle Kodi. Answer: not very well at all!

Running Backs: A. There were a few issues in blitz pickup blocking, but this unit toted the rock. When you average 6.8 yards per carry, with no fumbles against the number two team in the country, you've done well. What an amazing play by Michael Dyer on the last drive! I have to say, though, that the officials missed the wrist being down. Arkansas did not get that call in the Sugar Bowl, but we got it in the title game.

Quarterback: B. It wasn't a great game, with a lost fumble and an interception tossed into double coverage, but it was a good one. Cam made a lot of good throws, and picked up key first downs running the ball. He played on even after a huge hit that probably cracked some ribs. The Tigers managed 7.8 yards per pass, which is a decent average.

The Tigers came to Arizona, and took care of business! Auburn is number one, folks! Can you believe it? It wasn't always pretty this year, but at crunch time, there's been no one better in Auburn history. These Tigers are winners. The most decorated team in Auburn history added national championship trophies to its list Monday night.

How many folks expected two years ago that Gene Chizik would lead Auburn to the top of the nation? The man does not get enough credit, even now. With this organization he's put together, I don't think this one will be the last. I've never been prouder to be an Auburn Tiger! War Eagle, everybody! We ARE number one!