Auburn Now in the Ranks of College Football's All-Time Elites

Share All sharing options for: Auburn Now in the Ranks of College Football's All-Time Elites 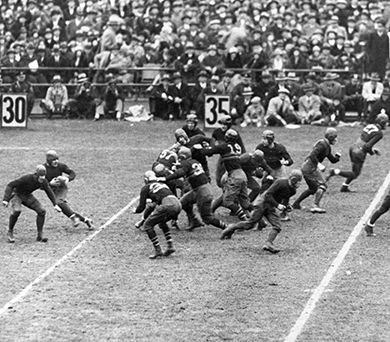 Now that we've had a week for the BCS title game victory to sink in, we can start to evaluate just what this win has done for our program--not just now in the short term, but how it effects the long run of college football through time and memorial as well. Auburn's third undefeated season in the last eighteen years was magnificent in it's own right, but more importantly, it finally got us over that hump of making the big-time once again after so long a drought. No longer is the monkey of CFB also-rans on our back. No longer are we the victims of poll or BCS bias. No longer will the telephone number 1-800-AUB-1957 be the only digits to dial the university ticket office. We have arrived. Again.

In a season where Auburn went over the historic 700-win mark, to place us into 13th place all-time in the nation, just behind LSU and Georgia, we demonstrated that you can be one of the nation's elite teams not only because we play in the toughest conference in the land, but also sometimes in spite of it. Of the twelve teams ahead of us on that list, only five have a higher all-time strength of schedule ranking. Auburn ranks 15th all-time in historic outright winning percentage, but would be 14th if Boise State and the Bronco's newbie weak schedule didn't comprise most of their wins. As far as other SEC teams on that list, we're 5th best in the conference all-time.

But more importantly, the BCS crown has pushed Auburn up inside the all-time CFB top 20 for historic teams. Don't believe me? If you're a stats guy like me, it's nice to have some sort of historical statistical indexingin order to gauge where teams rank against each other in a given decade, quarter century, or all-time. For me, the College Football Data Warehouse (CFBDW) has always been the site of record for most of the stats I use on this page, as referenced already by the links above. Regular readers are probably very familiar with it.

As you can see in the link above of the top all-time teams in college football history, Auburn is now ranked 16th overall, up from 21st place last year. As usual, the index uses a points system for all-time winning %, strength of schedule %, national championship points and big four bowl points. I wish they would tweak it by adding components for conference titles, poll rankings and bowl games, but it's the best we've got for now. The quantum leap for us, naturally, is the result of 50 points for the latest national title, our second legitimate one. To put in in perspective, Auburn now has as many AP/UPI/BCS national titles as Michigan does.

But lately it seems that CFBDW has been tweaking their formula just a bit to account for the chaotic inequities that have come to life in recent years about dubious national championship claims from the past. Their thoughts on the subject, which are much more lenient than my own. In years past, CFBDW took whatever ambiguous claims a university presented and weighted them all equally, legitimate AP, UPI, and BCS titles along with back-dated championships compiled before the advent of the media polls and composite championships--those awarded by a preponderance of minor national championship selectors outside the two main selectors of the time. Many schools have padded their resume with these dubious claims, the biggest fraudsters being Notre Dame, Alabama, Pittsburgh, Georgia Tech, California and Illinois. Most everyone already knows how these weaker national titles came to find their way unto Alabama's resume, and it's probably a similar tale for the others.

But what CFBDW has done the last year or so is to give less weight to these dubious titles instead of the maximum point allowance of 50 for a legitimate one. Historic AP, UP, UPI, Coach's Poll and BCS titles are given 50 points while the lesser ones are awarded 15 points instead. So why does Auburn have 115 points for NCs instead of just 100 for the 1957 AP and 2010 BCS? Somehow, in spite of the university not claiming it, CFBDW has decided to bestow the back-dated 1913 national title to the Tigers and award them 15 points for it.

Thanks, but no thanks. I'm not sure who's idea this was, but if you're going to count lessor selector titles, you can add 1983, 1993, and 2004 among them. (Okay, maybe we should claim 2004 since it's currently vacated and we did get some---never mind. I said I wouldn't talk about that anymore) Seriously, they at CFBDW need to get their stats consistent. There is a movement afoot to only recognize legitimate titles for teams, defined as AP titles from 1934, then 1936 on, UP Titles from 1935, then from 1950-57; UPI Titles from 1958-1995, USA Today/CNN/ESPN/Coach's from 1991 on, and the BCS crown from 1998 on. These so-called 'consensus' titles would go a long way in making statistical comparisons between teams across the decades much easier to do.

No true Auburn fan needs these figures to tell them what's already in their hearts. Even with no national championships, every Auburn fan would still be who they are in harmony with our team. We're always accused of living in the shadow cast in the western part of the state, and whether you think that is true or not, it can't be denied that Auburn has carved out it's own niche and earned it's way into the elite ranks of college football royalty. A legitimate challenger to the great powers of the game, we can now stake the claim of being a historical top15 team. But the game never rests. A top 10 ranking could be achieved in a few more decades of perseverance.

Few can deny that the epicenter of the CFB world has shifted south, right smack into the middle of our conference. Now, it is almost a given that the SEC champion gets a shot at the BCS crown. The conference has earned that respect since the dawn of the BCS with seven of the thirteen titles. Never before has winning the coveted SEC conference crown had so much riding on it. Opportunities abound not only for the winner, but for the other top stable mates each year as well. Auburn has started the new decade the absolute very best way that it could. Now is the time to build upon that. We play in a world of tough competitors. It won't be easy, but we've always competed and been among the best. We will build upon this year and continue to rise again for the challenge. War Eagle!