Is Auburn Football a One Hit Wonder?

Share All sharing options for: Is Auburn Football a One Hit Wonder? 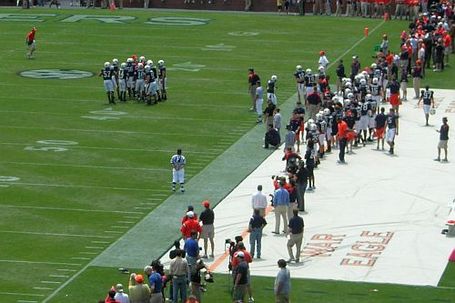 War Eagle, everybody! Awards continue to be bestowed on the National Champion Auburn Tiger football team. This week, Cam Newton picked up the Manning Award, as the nation's best college quarterback. Head coach Gene Chizik became the third Auburn coach to win the Paul Bear Bryant award honoring excellence both on and off the field.

Despite all Auburn has accomplished this past season, some folks think that the program is doomed to slide into mediocrity. Yes, Auburn lost three of the nation's best players to the NFL when Cam Newton, Nick Fairley and Darvin Adams declared for the draft. The Tigers also graduate 24 seniors from the program who've logged a lot of playing time. The odds are against any school attempting to repeat as BCS Champions. It has never been done. That does not mean Auburn won't contend again next season.

There are still some who believe that the NCAA and the FBI are poised to strip Auburn of everything won in 2010, and hammer the program with sanctions. Luckily, the NCAA doesn't make its decisions based on what's posted on message boards or babbled on talk radio. Let's review: there's been no investigation of Auburn, no letter of inquiry, and Auburn hasn't even been accused of any wrong-doing. The only "official" public action by the NCAA in the entire saga was to quickly reinstate Cam Newton when Auburn declared him ineligible. 'Nuff said here, I think.

Think back two years ago, early in the Gene Chizik era. Few pundits gave Auburn even a chance of being competitive in the SEC Western division. The Tigers had depth issues, little experience at quarterback, and few play makers. Even with the losses mentioned above, this year's Auburn squad is light-years ahead of where we were the past three seasons at this time. If there's one thing Chizik's staff has proven is that they can develop players. Let's face it. I think no one would have predicted that two late Tuberville-era receivers would have a shot at playing in the NFL (Adams and Zachary). This time last year, who penciled in Nick Fairley as even All-SEC, much less the Lombardi winner? Cam Newton was a flashy, but dicey JUCO pickup. There was no guarantee that he would even start at Auburn.

The 2011 team will feature a rebuilt front seven on defense, but there are pieces there for Ted Roof to work with. I can easily imagine a Fairley-like breakout year by sophomore tackle Jeffery Whitacker. Remember, Whitacker, and two other true freshmen played this past season, and were impressive. We'll have a pretty good line with Whitacker, Lemonier and Kenneth Carter going through a year of development under coaches Yox and Rocker. There's experience returning at linebacker. Eltoro Freeman, Darren Bates and Jonathan Evans, as well as talented second-year players Jake Holland, Jessel Curry, and LaDarius Owens should prove to be a capable bunch.

We saw signs of big improvement in the secondary the past six weeks, and most of those players return. Thorpe, Bell and Davis give us three battle-tested cornerbacks. Mike McNeil really came on late in the season, and should have a great senior season. Demetruce McNeal is a future star. This kid shone mostly on special teams, but he has a great motor, and unbelievable speed.

Everyone lauds Auburn's four departing seniors, but does anyone remember the tag on them two years ago? They were viewed as a false-starting, holding-flag, chop-blocking bunch, mostly. There's no reason to think that line coach Jeff Grimes won't piece together another talented unit. The 2011 team has experienced tackles returning, Brandon Moseley, A. J. Green, and John Sullen. There are capable folks beyond that, including our new center Blake Burgess. Mega-recruit Eric Mack enters the fray this spring.

Even with the loss of Darvin Adams, Kodi Burns and Terrell Zachary, Auburn has a lot of options at the receiver spots. Emory Blake proved to be a home-run threat in 2010. Quindarius Carr's a veteran who can make the catch. There's DeAngelo Benton, Trovon Reed, Shaun Kitchens, Antonio Goodwin, Ralph Spry, Phillip Pierre-Louis and Travante Stallworth who'll compete for playing time. Anyone think Trooper Taylor won't field another excellent unit?

With the fearsome foursome of backs returning, the running game will be in good hands. Eric Smith and Phillip Lutzenkirchen will plow open holes, and Michael Dyer and Onterio McCalebb will fly through them. We won't have the best player in America at quarterback, but I would not bet against Barrett Trotter doing great things. Gus Malzhan broke records with Chris Todd two years ago, and helped turn a JUCO athlete into a Heisman winner last year. Malzhan's greatest feat in the SEC might have been winning the West at Arkansas in 2006 with freshman Mitch Mustaine and sophomore Casey Dick at quarterback. I think we'll be just fine at quarterback in 2011.

Much has been made over the decisions of star juniors Cam Newton, Darvin Adams and Nick Fairley to declare for the NFL draft. Some call them disloyal. I disagree. The fact is that scholarships are only handed out one year at a time. Auburn can (and has in the past) decline to renew them upon occasion. Football is a violent sport that can cripple at any time. I don't think it's fair to ask those players to turn down multiple millions of dollars after they've earned that opportunity on the field. On top of that, there's talk of a rookie salary cap that will be in place for 2012 and beyond. There are plenty of guys coming out of high school every year. We'll give new guys a chance, and move on.

The bottom line is that Cam, Nick and Darvin got where they are by busting their tails year-round. They set a great example for the younger players of where effort and perseverance will take you. Much like one-year star Rudi Johnson ten years ago, this example will pay dividends going forward. I'm fully convinced that young Auburn backs like Ronnie Brown saw what a practice warrior Johnson was, and used that example to become great ones in their own right.

It has been a fascinating two years watching Coach Chizik and his staff build a championship team. They've cultivated a great atmosphere around the program, and are attracting top talent. They've shown tremendous propensity to develop that talent. This winter, we're watching them put together another highly rated recruiting class. Auburn should be poised to make some noise in the SEC West for years to come. It's a great time to be an Auburn Tiger! This era is only just beginning!