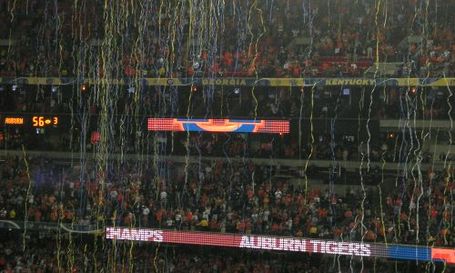 Did any of us see it coming?

War Eagle, everybody! The Auburn Tiger football team continues to receive decorations for the fantastic 2010 season, even late into January. This week, head coach Gene Chizik added the Bowden award to his already loaded trophy case. What an incredible season it was for the Tigers!

As I've stated before, I believe Auburn has the potential to finish near the top of the league again in 2011. Yes, the team loses 24 seniors plus three all-star juniors. However, the bulk of two very talented recruiting classes returns, and the incoming freshman class looks better and better each week! Most analysts now believe Auburn will finish with another top 5 class. One need look no further than the 2008 edition of the Alabama Crimson Tide to see where two great classes can take a team.

I won't get into specific predictions for 2011 till I see some spring games, but I think Auburn is likely to win 9 or 10 games in the regular season next fall. Before everyone laughs this off, remember that we've had a fair amount of success the past few years picking winners in the preseason here at TrackEmTigers.com. The only wrong guesses in 2009 were a loss to West Virginia, and a win over Kentucky. This past year's picks are presented in the table below.

Obviously, some of the scores are hideously wrong, but we had the winner right 13 times. We've missed the winner only three times out of the last 27 Auburn games. I did figure wrongly that we'd beat Clemson and Kentucky by big margins. No one could have seen Cam Newton's season coming, but it really doesn't matter who's calling the signals in Gus Malzhan's offense. The results have been consistently good over the past five seasons, wherever he's been.

Despite winning a 5th consecutive national title, the SEC as a whole was down in 2010. The league finished only 5-5 in bowl games, the first non-winning record since 2005. The West was strong, but the East imploded in 2010. Florida was the only East team to win a bowl game. The West won most of their bowl matchups, with the exception of Arkansas, who spotted Ohio State a three touchdown lead in route to a 31-26 Sugar Bowl loss. Since the SEC went to divisional play in 1992, Arkansas has easily been the worst bowl team, winning only 3 times in 11 tries.

I've long believed that net yards per pass is a good indicator of a team's success, but this year's results on that score are inconclusive. To quickly review, net yards per pass is figured by subtracting 50 yards from the equation for each interception thrown. That's basically your average field position loss on a pick. While quarterbacks with high ratings tended to be on teams that did well, there are several exceptions this season. Aaron Murray did very well, but played on a losing team. Florida and LSU won a combined 19 games, yet had some of the league's worst quarterback play.

I think the East will rebound in 2011. South Carolina has most of their good players back. Florida has a pretty salty defense returning, and the offense should be more productive under Charlie Weis. Georgia should be better with a year of experience in Todd Grantham's 3-4, and quarterback Aaron Murray will no longer be a freshman. I think Tennessee is still a couple of years away. They made a great late-season run to get to a bowl, but I think the struggles will continue for a while. Kentucky loses a lot of playmakers, and Vandy is starting over.

The West will be vicious once again. Alabama will likely have the league's best defense in 2011, along with some offensive weapons like Trent Richardson. LSU is just a coherent offensive system away from being a BCS contender. Arkansas should continue to move the ball well. Mississippi State should again be a phyical, fast team that wears folks out. Auburn will be talented, if young. Ole Miss has a lot of questions to answer. I think Houston Nutt will again find wins in the SEC to be rare with the squad he has returning.

National signing day is less than a week away. It will be interesting to see who goes where. We'll enjoy the glimpse into the future of SEC football! War Eagle, and lets all continue to enjoy that BCS Championship!