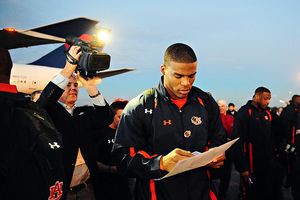 Cam arrives in Phoenix yesterday, checking his seat assignment, trying to figure out which prankster sat him in non-exit row coach with Nick Fairley's lunch box stowed under his seat.

What could make the impossibly long interval for the BCS title game a little easier to endure would be some entertaining bowl games on the slate. In case you didn't catch the riveting Humanitarian or New Mexico Bowls--never mind. I think TBS's 24-hour A Christmas Story marathon was more entertaining. I'd rather stick my tongue on a frozen pole than watch most of these match ups. The bowl system needs a total reworking from top to bottom because it's becoming a mockery of itself and is seriously diluting the product. Bowls have ceased being extravagant post season rewards for deserving teams and have morphed into something resembling pre-packaged sub-prime mortgages sold to Fannie Mae, or in most cases, to ESPN. And all the foreclosures are about to tank the whole neighborhood.

I've got a few ideas about how to rework the bowl system and contrary to my statements above, it doesn't necessarily begin with contraction. Bowls need to be basically split into two groups--one for mid-major teams and one for BCS schools, with little cross contamination, if any. Yes, I know, it sounds exclusionary, but the same current 'rules' will apply with deserving non-AQ teams who rank high in the BCS polls getting their due and playing in the big four BCS bowls. I'm talking about The Little Caeser's Pizza Bowl, which featured Florida International and Toledo, or the upcoming GMAC Bowl with Middle Tennessee State and Miami of Ohio. All enlist mid-major teams. Why not keep it that way until a bowl can move it on up? And by the way, GMAC Bowl, do you really think that playing your sawed-off bowl this Thursday will garner more viewers than if it were the week before Christmas? Why does ESPN let them get away with scheduling it so late? There should definitely be a scheduling hierarchy that follows the prestige of the bowl itself, dollar for dollar, day for day.

You want your bowl affirmative action? Then make the new bowl kids on the block and the ones who change names every year service mid-major teams exclusively. They're the teams who can have great seasons but may never crack the BCS top 50. Let them have their just desserts and choose to go to these games if they want to and if they can afford to. Travelling is expensive and hard for some of these teams, hence the propensity for taking marginal BCS teams. If that's the case, then maybe we should just cut the number of bowl games. But we should try it and have roughly half of the bowls be off limits to BCS teams. I'm tired of these major programs with a .500 record getting into bowl games. They should be held to a higher standard and should just sit home rather than phoning in a half-ass result, like Georgia did with UCF on Friday.

Don't get me wrong. I'm a capitalist and if the networks, the prime enablers of these crappy bowl games, can make a profit, then I understand what they're doing, but there is still the law of unintended consequences. There's little doubt that many of the local insider bowl organizers make plenty of loot by putting on their unsold-out events, and get major  press for themselves, but that's another story. The question is should we be allowing lucrative television contracts and these puny bowl fiefdoms to dilute our college football product with unattractive match-ups and empty stadiums just for the sake of a few dollars and an ego boost? The cameras during these games rarely show crowd shots in an attempt to hide all the empty seats, but they're still visible if you know when to look. What if they threw a bowl game and nobody came? Does a bowl game being played in the woods with nobody around make a sound? Only ESPN knows for sure.

Thirty-four bowls plus the BCS title game. Does 60% of FBS teams really deserve to go to a bowl game? And if so, haven't we just seriously diminished the very meaning of the term bowl game in this brave new everybody wins, yay society of ours? So, for the sake of sanity, here is my list of quick, simple changes that need to be made to the bowl process STAT, in order to restore some sense of prestige and honor to this storied portion of our sport before we commercialize it to death.

Establish a name and stick to it: Chose a specific name for your bowl and then choose your sponsor. They can't be the same. If you were always called the Tangerine bowl, or you want to call yourself the Las Vegas Bowl, then that's what you are. That way, it's easier for fans to keep track of you years down the road even when your sponsorships are going to the highest bidder every year. "Oh, the 2007  Peach Bowl. I remember that. Auburn and Clemson went into overtime." Your sponsor can change, and who cares if no fan can remember who it was years down the road. Yea, it'll be less money for the organizers, but we're pimping out our sport to the highest bidder as it is. The sponsors get enough attention by not having to name the entire bowl after themselves. Right now, we're lucky that the bowls are just named for the company itself and not specific products: The Little Caesers Cheesy Bread and Wings Combo Pizza Bowl. The Geico Save Half Your Income By Switching to Us Bowl. The Glad Quart-Size Zippable Sandwich Bag Bowl. Don't tell me it's not coming. Wait until they require coaches to mention the sponsor every third sentence. We'll start to look like NASCAR before you know it.

Raise the minimum win eligibility requirement to 8: We had the 6-drink GAME minimum back when we only played a 10-game season. With a 12-game season currently the norm, (13 if you play Hawaii in Okinawa or play in a conference championship game) requiring a team to have only won two thirds of their games to get a end of season cookie is about the least we can do--literally. It just is such a buzz-kill to have teams go to a bowl, lose, and finish with a losing record. It instantly makes you wonder why they were in a bowl in the first place. Certainly Georgia isn't the only bowl team the past few years to finish 6-7, but what would be so wrong at making them the last? We just have to eliminate this mentality of bowl entitlement in our sport. It cheapens what the real good teams accomplish.

Minimum ticket sales: Want to start a new bowl or keep your existing one? You must demonstrate the ability to sell a minimum number of annual season tickets to locals, say 25%, and then sell out at least two thirds of the remaining seats for a pre-determined interval, say 5 years. I'm tired of television rights being the life support that keeps these crappy games breathing. If a bowl game is such a cool thing for your community, then people other than fans of the two schools should support it. If they don't, then stick to other things that sell tickets like gun shows, circuses and Dragon/Fantasy Con.

TV Ratings: Okay, I plead ignorance of the ratings of most of these smaller bowl games. Perhaps I need my own TET intern to do basic research for me. Any volunteers? Naturally, with TV money being the sole existence of most of these bowls, maybe we should examine which bowls attract a large enough TV audience and axe those that don't perform well over a certain time period, regardless of what the networks value them at. I admit, I'm torn about cutting a network off  if they're making a profit off of something, but the NCAA must safeguard it's brand here. To do otherwise, I feel, is devaluing and destroying the sport.

Git-R-Done: The regular season is basically wrapped up even with the conference championship games after the first week in December, (with the exception of Army-Navy, who like to have a whole weekend to themselves, which is permissible) so why not start to get these bowl games knocked out in quick order? You can't blame academics, as most students are out for break around the same time. The only general rule is don't interfere with the NFL, which isn't a good idea as that turf war has pretty solid distinctions set in stone. Since everybody takes so much time off in December, the chances of them catching the Maaco Las Vegas Bowl on a Tuesday night are pretty good.

The heirarchy of bowl games should dictate who has to be completed by which date certain. The lower tier have to be wrapped up by a few days before New Year's, the middle tier has to be completed by January 1st, and the four BCS bowls have to be within 2 days of January1 st unless it falls on a Sunday. Then the BCS title game comes one day after the last BCS Bowl game, again unless there's a conflict. Under that system, we'd have knocked out the Orange, Sugar, Fiesta, and Rose by this past Saturday or last night, and have Auburn and Oregon tonight. Waiting another week makes no sense and I believe makes casual fans lose interest in the title game.

Next step: getting someone to appoint me College Football Czar.