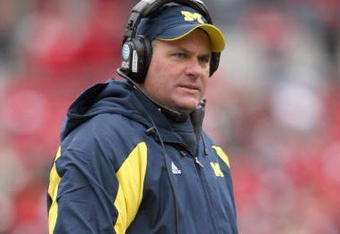 Country roads, take me home, to a place, where I belong...

It's being reported that Michigan head coach Rich Rodriquez is out today, the drubbing by Mississippi State in the Gator Bowl being the final nail in his three -year tenure at the Big House. Once the hottest coaching commodity out there after almost landing West Virginia in the BCS title game in 2007, Rich Rod had teased Alabama after the 2006 season before spurning them and working himself a big raise with the Mountaineers. The next season he was lured away by Michigan to take over for the retired/fired Lloyd Carr and was mostly noted for the subsequent lawsuit by WVU over his bonuses as he hit the country roads of West Virginia for another place he belonged.

Under Rodriguez's helm, the Maize and Blue suffered their worst season ever (2008) and their worst bowl loss ever (2010), among other underwhelming accomplishments.

But early word is that Stanford's Jim Harbaugh, a Michigan alum and  the hottest dual threat NFL/CFB coaching prospect in the land, is not interested in the job, which is probably a nice way of saying that he is clamoring for a NFL job. Could that leave fellow Ann Arbor alumnus Leslie Miles a candidate once again? Once bitten, twice shy, baby?

If you recall, Miles was a leading candidate in early 2008 after winning the BCS title at LSU and clearly considered answering the call to come home, but decided his fortunes were better down on the Bayou--either that or time expired on the clock before he could make up his mind.

I respected Miles for that decision as it showed him to be a consummate professional by sticking with a good thing, but it also didn't hurt that Baton Rouge threw a ton of cash at him and inked in a big buyout clause that is reportedly still huge--cue TET LSU-bureau reporter Jonno to fill in what that amount may be. Jonno?

This opening is certainly to be the biggest of the year and coaching voids this size always have major repercussions and aftermaths in the CFB world as other teams adjust or are forced to fill holes in their staff--that on top of the endless speculation.

And Auburn family, I think I'm pretty safe in going ahead and saying that Gus Malzahn IS NOT going to be on the short list of candidates for Michigan. Thank you.

UPDATE: As of 10:48 EST, ESPN is reporting that Michigan AD Dave Brandon said that a decision still hasn't been made on Rodriguez's fate and that the two met today at Brandon's house for about three hours and are scheduled to meet again Wednesday. More to come tomorrow, I guess.