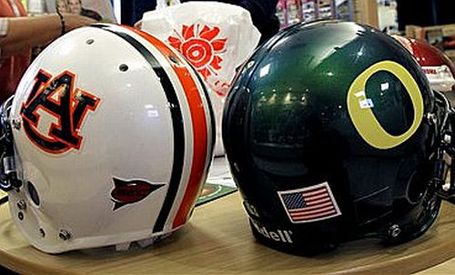 War Eagle, Everybody! The Holidays are over now, but what a month of celebrating it has been! Now, it's time to get back to work. On Monday night, the Auburn Tigers take on the Oregon Ducks, and the winner will be the national champion. It is rarefied air for both teams, as neither has ever played in a bowl game for the big title. News from Arizona indicates that both teams are taking the game extremely seriously, and are preparing intensely. Today, we'll break down this matchup.

Much has been made over pacing and fatigue in this game, but I think it's unlikely to have much bearing. Both teams have had five weeks to recuperate from the regular season, and have trained hard during that time. Unless time of possession is extremely lopsided on one side or the other, I doubt you'll see either team being worn down. In addition, both squads substitute quite a bit in the defensive front seven. I know I sat through the Rose Bowl last Saturday, convinced that Wisconsin's mammoth line would wear down the smaller TCU defenders in the end. It never happened. Bowls are a one-shot deal, and players will give it their all. The fast pace both offenses like to use will mainly affect defensive substitution. Both offenses can run anything from power football to five wides with pretty much the same personnel, making it difficult to get the right defensive guys in based on down and distance.

Often, bowl games are won by the stronger team. There are timing issues, sloppy tackling problems, and general rust exhibited in every post-season matchup that I've watched the past two weeks. The teams that can run the ball, and stop the run will usually prevail. I believe Auburn does have strength advantages in the trenches, but that does not make it a certainty that the Tigers will win. Coverage issues, arm tackling, and slow starts on both sides of the ball have plagued Auburn all season. A team can dig themselves into too big a hole, as evidenced by the performance of the Arkansas Razorbacks against Ohio State in the Sugar Bowl.

Game breakdown by section, after the jump!

I'd expect Auburn to open the game in base defense, with an emphasis on gap control and run fits. It's been the pattern all year, and I'd be surprised if Ted Roof calls a lot of all-out blitzes early. The Ducks should have a variety of outside passing and running options available starting out. Oregon should have early success on offense, but the critical factor in the game will be how many hits they let quarterback Darron Thomas take. Auburn has a fast, athletic defensive line, and they hit the quarterback full speed. There have been few starting quarterbacks on Auburn's schedule that were still playing at the end of the game, and even fewer playing effectively. Auburn knocked QBs out of the Arkansas State, Mississippi State, South Carolina, Louisiana Monroe, Arkansas, LSU, Tennessee Chattanooga, Georgia and Alabama games. Even those who finished weren't throwing well at the end. Oregon will counter the stout Auburn front four with a veteran offensive line that has played a lot of ball.

One thing that will give Auburn coach Ted Roof fits is that Oregon is good at spreading the ball around, as opposed to recent SEC offenses that like to feature a superstar receiver. The Ducks have five receivers that have over 300 yards each. A key matchup will be the Auburn nickel or safety coverage against Duck tight end David Paulson. Much like Auburn's Phillip Lutzenkirchen, most of his catches are either for first downs or scores. Paulson is also leading the Ducks in yards per reception, at 17.6. This is a tall order for Auburn safeties Zach Etheridge and Mike McNeil, neither of whom have blazing speed.

When the Ducks run the ball, all eyes upon tailback LaMichael James. He can pop through a crack and be gone in a flash. The Auburn back seven must tackle squarely. There can be no diving and missing, or reaching, out of position arm tackles. The Tigers must square up, and wrap up. James isn't the only worry on the ground. Duck QB Darron Thomas has 492 rushing yards, although I'd look for the Ducks to limit his carries in this one. Backup running back Kenjon Barner is solid as well. Like Auburn does with Terrell Zachary, the Oregon offense uses a variety of receivers as an option on the speed sweep. The most dangerous of these appears to be Josh Huff, who has picked up 214 yards on just 12 carries.

On paper, the Oregon offense appears to have a mismatch against the Auburn defense. Most SEC offenses had that appearance also, but Auburn allowed less than 4 points per game in the 4th quarter over the course of the season.

On special teams, the Ducks appear to have the edge, thanks for the most part to the punting game. Cliff Harris has returned an astounding 4 punts for touchdowns. Auburn has had problems even fielding the ball. The Tigers have managed only 37.5 yards per punt, while Oregon averages 42.5. While both teams punt the ball about the same number of times, Oregon is allowing 9.2 yards per return, while Auburn is allowing only 5.5 yards. The Tigers have only had 8 returns on 38 punts, as the team has relied on high punts, forcing a lot of fair catches.

Kickoff distance, and kick coverage appear to be similar between the two teams. The same can be said about field goal accuracy, at about 75 percent. Auburn appears to have a slight edge in kick returning, by about 3 yards per return. Also, Auburn senior Wes Byrum has a lot of experience in his 4-year career with pressure-filled, end of game kicks. Byrum beat Florida and Arkansas on the last play of his freshman season, beat Northwestern in overtime in last year's Outback Bowl, and has game-winning kicks in this year's Mississippi State, Clemson and Kentucky games. The Alabama game was won on a Wes Byrum extra point. He can knock it through with the game on the line!

When Auburn has the ball, the key matchup is on the line. Auburn goes with a mammoth line featuring 2 four-year starters, and 2 three-year starters. It will be very interesting to see how the duck tackles, Brandon Bair and Zac Clark handle Auburn's array of pulls and traps in the interior line. The pair has 23 tackles for loss, and at 6'7" tall, Bair has had a knack for deflecting passes. If the Ducks get handled by the Auburn line, it will make for a difficult day for the back seven. That said, the Ducks do field a trio of mid-sized, 230 pound-plus backers who can really run.

Auburn often leaves a tackle unblocked, and relies on quickness to avoid that player. On Auburn's inside inverted veer, it will be key to see how these guys handle Cameron Newton. They aren't much bigger than Newton, and will be facing a very agile as well as powerful runner. Most teams that have successfully defended Auburn's inside running game have had to bring two extra defenders into the box, opening up the speed sweep and the passing game. I expect that to be the case with Oregon also, and given excellent man coverage skills on the outside, I expect the Ducks to try to make Newton beat them with his arm. It's worth noting that Oregon is one of the best sacking teams in the nation, with 31 sacks and 90 tackles for loss. Auburn opponents who've keyed on Newton too much have been burned by Auburn's other runners, Michael Dyer and Onterion McCalebb. The pair has combined for 1713 yards and 14 touchdowns.

Auburn receiver Darvin Adams caught fewer balls this year than a year ago, but that's actually a good thing. Auburn has not had to pass nearly as much, and the Tigers have been able to spread the ball around more. That said, I did not see any team cover Adams consistently, not even with a safety in double coverage. Should Oregon go with a lot of man-to-man, Newton will be looking for Adams. The corners on the islands covering Adams and Zachary will be Cliff Harris, Talmadge Jackson, and Anthony Gilden. The trio has a combined 7 interceptions and 23 pass breakups. They do play the ball! Talmadge is third on the team with 67 tackles.

It's a football cliché, but turnovers are big in any game. Darron Thomas has thrown 7 interceptions in 12 games, and Cameron Newton has 6 in 13 games, so that's pretty even. Oregon has lost 15 fumbles, to Auburn's 9. Neither team is really turnover prone, but Auburn seems to be less so than Oregon. Also, about 6 of Auburn's lost fumbles either came on carries by Mario Fannin, or fumbled punts by Quindarious Carr. Carr's been replaced on the return team by Darvin Adams, and Fannin seldom gets the ball any more, except in mop-up duty. The two teams' roles are reversed as far as forcing turnovers. Oregon has intercepted 20 passes to Auburn's 10, and recovered 15 fumbles to Auburn's 10. My guess is that whichever team wins the turnover margin by two or more is the easy winner in this game.

One of the ways I like to compare teams is to see how they did against common opponents. That doesn't work here, with no common foes. There's not even much second-hand opponents-who-played-opponents data available. The only thing close might be the Oregon/Tennessee game early in the season. The first half was competitive, but Tennessee's thin, young defense got winded and killed in the second half. Of course against SEC competition, Tennessee's only wins were Kentucky, Vanderbilt and Ole Miss, two of which didn't get to a bowl game.

Rather than simply flipping a coin, I'm going to base my prediction off of ESPN's helpful offensive "splits" tabs. Against 6 AP-ranked opponents, Auburn averaged 400.2 yards per game. Against 5 AP-ranked teams, Oregon averaged 352.4 yards per game. Led by Heisman winner Cam Newton, I think Auburn is about 50 yards better.

Be sure and join us Monday night, as we'll have an open thread and play by play! As always, feel free to join in! We'll be here, after a whole month of getting fired up. War Eagle!

Prediction: As usual, the Tigers trail early, but settle down as the game wears on. Cam Newton has a 4th quarter for the ages, and Auburn pulls out a 41-35 win!