Share All sharing options for: Auburn Tigers - The Symphonic Orchestra

When an orchestra is performing, the music tells a story. 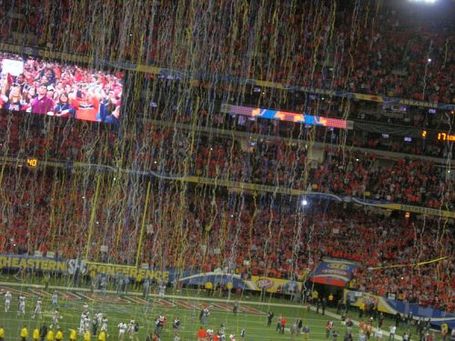 At the beginning of each symphony the director is seen walking around checking with each group that all is well, and that preparations are finalized. Seen walking around the "pit" the best directors usually look relaxed, and friendly, barely perceptible as the leader by those present in the audience.

As the show is about to start however, it becomes very clear to all, as he taps the wand on the podium, everyone's attention turns to him. Leaving zero doubt as to who is the the undisputed leader.

Every single Auburn football game that I have been fortunate enough to attend is like this symphony.

As the team is in the spring and summer camps preparing for the season ahead, there is hope and anticipation. Practices are many, sometimes with anguish, and mental exhaustion reaching each athletes limits. Coaches push them to make them better, to show them that they can indeed perform on a much higher plane than even the athlete themselves had previously imagined.

Finally game week approaches and the practice turns from learning, to preparing for the first performance.

Anticipation builds in the audience, and everyone knows the show is about to begin.

The Coach has had his mid week press conference, the team has gone through the final walk-through, and is now in the locker room getting ready to make their grand appearance.

Usually a bold start to any symphony is a must, and with any great masterpiece, it is no different. As the show starts, the orchestra erupts into musical motion and the show has begun.

Exactly the same thing happens when the Tigers take the field. The fight song is heard from a mile away as the entire Auburn family in attendance rings out in harmony.

In the symphony each instrument must play it's part, while on the field each position must be played, both with skill and attention to minute detail.

With remarkable precision the story unfolds, all eyes are on the performers, watching intently and with anticipation that any play, or movement, can bring the highlight of the score. Back and forth, segment by segment, they feature different instruments and sections of the orchestra, each with unique skills, and compositions of character.

The anticipation builds as the finale nears.

All of the preparation, the blood, sweat, and sometimes tears, are culminated in the grand and glorious build up to the climatic and triumphant crescendo!