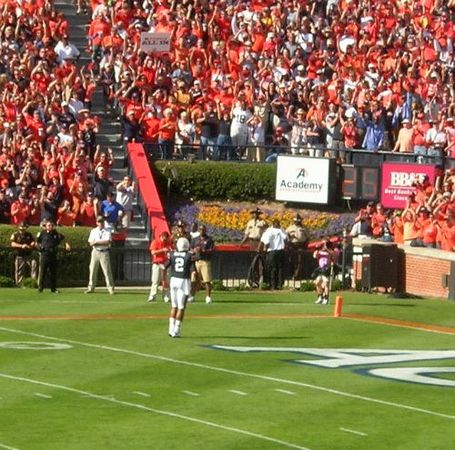 One man stands alone in the Auburn record books.

War Eagle, everybody! Today marks the end of a year of rumor, innuendo, slander and maliciousness. The Auburn Tigers, for nearly a year have been accused, vilified and convicted in the national media. Without any substantial evidence, writers such as Joe Schad have smeared the Tigers relentlessly, and attempted to derail a young man's football career. Today, Auburn and Cam Newton stand officially exonerated from any major wrong-doing by the NCAA.

The NCAA also found no evidence of wrong-doing in the cases of the four former Auburn players who claimed on HBO Real Sports to have been paid at Auburn. Three of the four refused to cooperate with the NCAA investigation, and there were serious doubts about the credibility of the fourth's tales. It never occurred to numerous journalists to look at the facts and actual evidence in the cases. Instead, unprecedented vitriol was directed at the Auburn family. It's certainly important to remember what Auburn endured, the next time such pieces are written about another school. The lesson: don't judge without evidence.

What is amazing is that it took this long for the NCAA to make the statement. There's no telling how much damage the atmosphere has caused Auburn recruiting. It hurt Auburn last season, too. Several awards were denied to Cam Newton over the allegations. Over a hundred Heisman voters left Cam off their ballots, all over unproven allegations. All those tales of "tainted titles," and Auburn probation/death penalty have proved to be hot air. I wonder what the next salvo against Auburn will be? Folks have tried to keep this campaign going, certainly. It's nice to know that the NCAA puts little stock in nebulous tales of mysterious "bag men," or internet fabrications like "Tiger Droppings."

With the letter from the NCAA, it's time to reaffirm Cam Newton officially as the man with the greatest season in Auburn history. Here are the Heisman winner's stats from last season:

264 rushes, for 1473 yards, and 20 touchdowns on the ground. Only Bo Jackson and Rudi Johnson had more yards in a season for Auburn. No one had ever scored 20 touchdowns before. The previous record was held by Carnell Williams and Bo Jackson at 18.

185 completions in 280 attempts, with 7 interceptions and 30 touchdowns. 2854 passing yards. Newton will go down with the most touchdown passes in a season, and the highest efficiency with a rating of 203.9.

2 receptions for 42 yards and 1 touchdown. Overall, Cam Newton generated 4369 yards in a single season, an average of 312 yards per game. He was responsible for 51 touchdowns, or an average of 3.6 touchdowns per game. Cam either threw or crossed the goal line for 306 points. Only 24 Auburn TEAMS have scored more points in a season in Auburn's 120 year history. The Auburn Tigers shattered the team scoring record, piling up 577 points in 14 games. The previous record was 438, set in 1995.

By the way, Auburn has a game this Saturday! Let's get back to this year. This weekend, Auburn hosts the Florida Gators. The game will kick off around 6:00 PM Central Time, on ESPN. Both teams hope to battle through injuries, eliminate mistakes, and rebuild broken passing attacks. Here's hoping the Auburn faithful make Jordan Hare Stadium a loud and hostile place for Florida quarterbacks. I'll be there screaming, and doing my part! As always, we'll have an open thread up Saturday morning. Feel free to join in the fun! War Eagle!