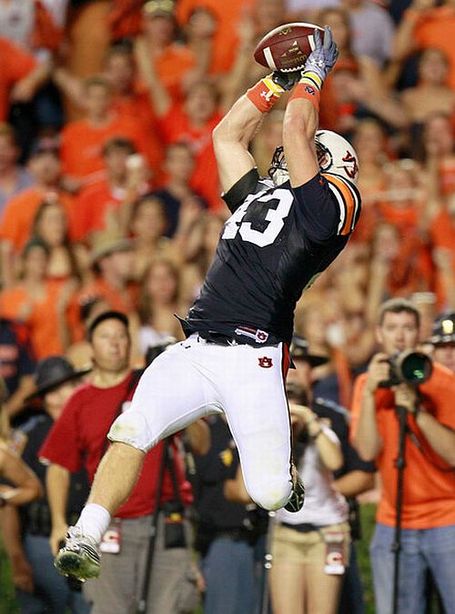 I could end this post right there, and would have summed up my feelings for this season's version of the Tiger Bowl.

Seriously, a fresh face at QB that clearly showed some improvement over what we had witnessed out of that position in 2-1/2 games. Linebackers finally getting the entire picture on their assignments with improved pass coverage, and much improved run stoppage.

The defensive front showing remarkable improvement in penetration via the pass rush, and better understanding of the entire scheme.

Add to that, a killer special teams group, that Coach Taylor calls "WE-fense", and you have the recipe needed for something special to happen in Baton Rouge this weekend.

I am Mr. Homer McHomerson, I know, but I just can't shake this feeling. You guys laughed at me early last season when I said the same thing. Laugh all you want to, I'll stick with my gut feeling.

Coach Chizik has stated that Clint Moseley had a great week of practice. Unfortunately, the injury bug is still on Blake, Reed, and we learned this week that Jared Cooper will miss the rest of the season. Surgery was performed on his foot, Monday, and hopefully the recovery process will start soon. Get Well Jared.

Prosecutors said during today's preliminary hearing that Jemison, who played quarterback at McAdory High School and then linebacker for a brief time at Auburn University before leaving the team in 2009, went to see Williams with the intent to purchase drugs. Prosecutors said Jemison and Williams argued and then Jemison shot and robbed the 23-year-old Bessemer man.

Marcus Jemison, who was briefly with the team, has problems. More than he ever wanted. Statistics show, that straightening his life out after these kinds of troubles are slim. Here's to hoping he can, and does.

Speaking of horrible subjects, the trial date for the, not so fantastic four, is set for March 11th, 2012.

Homecoming on the Plains...

Looks like a pay per view event. I stated earlier in the season, that I thought the Auburn officials would have something special planned for Pat Sullivan, for this year's homecoming. He is the Head Coach at Samford University, Auburn's opponent.

It would be a fantastic time to honor Auburn's first Heisman Award winner.

Missouri's Board of Curators is meeting this week with plans to discuss departure from the Big12 and applying for membership into the SEC.

I knew this story wasn't going to just die, and the frustration developed by ESPN, the Big12 front office, and the University of Texas has been too much for most respectable schools to endure for long.

Argue all you want about brand "A" vs. Brand "B" but Texas doesn't bring as much to the table as to keep everyone else in the conference from eating along side them.

While we are talking about conference dislikes, and such, UConn basketball coach Geno Auriemma believes the whole problem with the Big East is because of Notre Dame not being a football member. Yeah that's the reason, Geno. Not that the conference is worthless as a whole as far as football goes. It's the Catholic's fault. Sure it is.

Maybe, I am looking at this wrong, but this is what Mark Richt, the head football coach at the University of Georgia had to say about the incident that happened last weekend ....

"For the most part, everybody's blood gets hot and things happen that everybody's not too proud of and we reflect and correct and we move on, so that's what we're doing," Georgia coach Mark Richt said Wednesday on the SEC coaches' teleconference.

Is it me, or did he just pooh-ppoh the whole deal about his DC getting in the face of another coach from another school, while three players get suspensions?

I hope I am interpreting that remark the wrong way.

I think there are three keys to this game with LSU that Auburn must have, in order to beat the Bengal Cats. Here they are.

1.) Moseley must have his best week of practice. Knowing the playbook is not a problem, he has been in Malzahn's offense for 2 and a half years, so he knows the plays.

2.) Auburn's defense must control the line of scrimmage, and not allow LSU to run at will. Create some turnovers, and keep LSU's QB's running for their life.

3.) The offense must continue to run the ball well, and have a successful day passing the ball, with zero turnovers.

If all of that comes to fruition, then and only then will Auburn have a decent shot at upsetting LSU. If they come out flat, or have several turnovers, and can't stop the run, they will have, zero chance to win. That's the way I see it anyway.