Share All sharing options for: Bears Visit the Tiger Den. 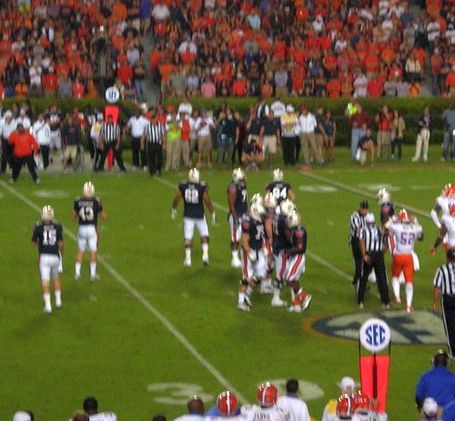 Can Clint Moseley engineer another win?

War Eagle, everybody. It's Ole Miss week, which means that Auburn's October gauntlet is nearly finished. Thus far, the Tigers are 2-2 in the month, with victories over Florida and then #9 South Carolina. Should the Tigers win Saturday, they'll become bowl-eligible, and can finish no lower than 4th in the SEC West. Records aside, it's important this week for the Tigers to regroup, and play well after last week's disappointment against LSU.

There's been a lively discussion on the blog this week on Auburn's chances in this game. My own thoughts are more along the lines of aubtigerman's excellent "wounded bear" post. Auburn hasn't won big yet this year, and with the injuries and youth on this team, they probably won't blow any FBS schools away. The Rebels have some weapons on offense, and I'd expect them to move the ball at times. I'd have to figure on a better blocking performance on offense than last week, but expect to see some lapses at times.

In recent history, these two teams tend to play close games. The series became an annual one in 1990, and in the 21 years since, the game has been decided by 10 points or less 11 times. Auburn has only blown Ole Miss out by 21 or more points 3 times during that span. Ole Miss has one blowout of Auburn, way back in the 1992 season opener. This trend is true even if one squad is up and the other is down.

In 1999, it was Auburn's turn to head for a losing record, while Ole Miss ended up with a bowl win over Oklahoma. The Tigers missed a potential game-winning chip shot at the end of regulation play, and lost in overtime 24-17. The next four years the Auburn vs. Ole Miss game was decided by 8 points or less.

Comparing these two teams, the biggest difference this year has been a lack of offensive production by the Rebels. The rough thing is that Ole Miss is trending upwards, despite playing top 10 ranked opponents the past two weeks. Auburn hasn't shown a prolific offense since the first half of the Clemson game back in September.

The other factor to look at in this game is the teams' performance stopping the run. Auburn has not been great, giving up 4.5 yards per carry. Ole Miss has been atrocious, giving up a whopping 5.6 yards. After watching much of the Rebels' game against Arkansas, I believe it was the Razorback run game that made the difference. Auburn must get untracked on the ground in this one, and make Rebels pay. The running game will decide this one, because both teams are playing relatively inexperienced quarterbacks who will likely make some mistakes.

The Tiger lineup for this game should not dramatically change this week. Expect a lot of defensive tackles to play, while the end position remains a 3-way rotation with Nosa Eguae, Corey Lemonier and Craig Sanders. Jake Holland has not practiced this week, so expect to see a lot of Eltoro Freeman in the middle. The Tigers will rotate a number of young folks in the secondary. I'm not sure we'll see Tre Mason on the kick return team. If a possible concussion doesn't hold him out, losing the football against LSU might. In the receiving corps, coaches have said to look for Trovon Reed to have an expanded role this week. The news on Emory Blake isn't as good. From the sounds of it, he's still pretty limited, and probably won't play.

Weighing in on Auburn's quarterback rotation, I'd have to say that I'm in favor of letting Clint Moseley settle in, and limiting the Frazier wildcat package. I'd like to see the young man get into a rhythm as a starting SEC quarterback. With the Rebel deficiencies in the front seven, though, that may not happen. If Frazier has success running, Auburn's staff may use that package a lot. I think the coaches' goal has to be to get to the bye week with a win, whatever it takes. I can't really argue with that.

We'll have the usual open thread up in this space, Saturday morning. I'm headed for Auburn Saturday afternoon, to yell, cheer, and generally have a great time. This game is a 6:00 PM Central Time kickoff, and it's on ESPN-U. War Eagle, everybody, and let's beat those Rebels!