Friday Ramblings - Into the Future We Go

Share All sharing options for: Friday Ramblings - Into the Future We Go 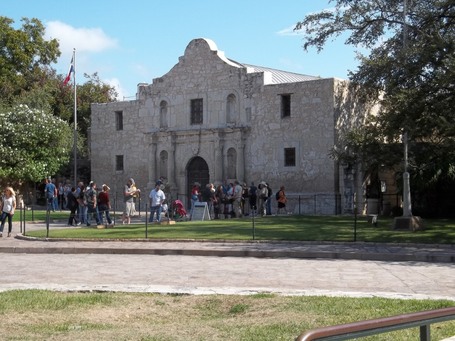 Coming to you live from San Antonio, TX

Home of the Alamo.

An insignificant event in the world of inter-web sports happened this week, when Auburn University agreed to a deal with CentrixSocial to monitor their student athletes social media outlets. Using the patented software known as Social Verse.

This should help the compliance department tremendously. As someone that uses twitter and facebook on occasion, I have seen many messages sent by some athletes that could have used better judgement. One of the largest areas of concern is the misuse of the social media, and possibly inadvertent mistakes made by prospective student athletes.

By now I am sure that you heard about Coach Chizik's statements concerning his new starting QB Clint Moseley. In case you didn't here it is...

"I never saw anything in the game that indicated to me that he was losing confidence or didn’t feel like he could get the job done," Chizik said. "I’m real proud of the way that he carried himself and handled all the adversity that we had and encountered Saturday. I feel like he did a great job with that."

Coming from the usually tight lipped Chizik, this is high praise indeed. Moseley also impressed one of his offensive linemen.

"When we went three-and-out and gave up a sack, he’d come to the O-line and say, ‘Come on y’all, we can do it, we can do it. I still trust you guys,’ " Sullen said. "He’s a very patient guy. But when it comes down to it, we’ve just got to protect better. He handled things very well."

Two very encouraging positives coming from a severe loss at the hands of the #1 Bayou Bengals.

The wrath of Khan Grimes

My guess is this isn't a good week to have to be facing Jeff Grimes. Offensive linemen may wish to re-enter Death Valley all over again, than to confront the wrath of Grimes. There was a tremendous step backwards taken by our men in the trenches on that side of the ball. Coming to grips with that fact won't be easy, or painless. You can bet that this week, they play much better. There are no alternatives.

Coach Grimes did say this after Wednesday's practice...

Eric Mack has emerged as the team’s top reserve at both guard positions. Also, Tunde Fariyike has been promoted to Reese Dismukes’ understudy at center. “The last two weeks, both of those guys have gotten a lot better,” Grimes said. “I put the pressure on Mac and Tunde. They have responded well. I’m more pleased with them right now than I have been at any point.”

Thanks to Jay G. Tate over at HABOTN

Former Head football coach Tommy Tubberville, and his last defensive coordinator while at Auburn, Paul Rhoades, will meet again on the field as the Texas Tech Red Raiders take on the Iowa State Cyclones. It should be on TV, if you are interested.

Texas Tech is coming off of a big win against Oklahoma. The Cyclones are 0-4 in conference play.

Holy cow, just when you think you can wrap your gray matter fuzzies around an idea, along comes this......

The Las Vegas Review-Journal reported that commissioners of the three conferences were planning to meet on Wednesday to discuss the possibility of forming a single football league.

Andy Katz of ESPN.com tells us the rest HERE.

Are you kidding me? A super conference seeking an automatic acceptance into the BCS? It makes sense from one point, I just don't know how this would all work out. I mean a possible 32 team Super Conference, would be something that NOBODY saw coming. The merging of the Western Athletic Conference with the Mountain West and Big East is enormous, in that this would be ground breaking in college athletics.

*****LATE UPDATE We have learned that the meeting between the commissioners of the Big East and Mountain West conferences, has been canceled. This may not indicate the lack of interest in the Super conference talk, just a better time must be sought for these discussions.

Sometimes we all need it. We need that little embarrassment to get us to thinking more clearly.

Let's call it what it is, a transition year. You can blame me for getting your hopes up, instead of getting you ready for the stress and struggles. No excuses will ever come from Gene Chizik. Zero chance any other coach gets thrown under the bus this year.

There are those who want the heads to roll, and even those that have allowed themselves that Coach Chizik isn't nearly as good as some originally thought he was. I am not here to call anyone out, I strongly disagree with those thoughts, and will defend our coaches until the time comes that I no longer am able to.

Consider this. Nick Saban won the MNC while at LSU(his 2nd season there) with players that he inherited. Much like Chizik. The next season he lost to 'Bama 31-0 and to Auburn 31-7 all the while losing 5 games that season. See where I am going with this? Bob Stoops did the same thing, almost. His second season he wins the MNC. That was 2000.

So where do we go from here? My guess is the sky is the limit. Yeah, I know that Gus Malzahn is still a commodity in the coaching carousel ahead, that still doesn't mean doom for Auburn. This season is just a storm cloud. It's tough as heck when you are getting rained on, wind blowing you around, and hail falling from the sky as well, but the sunshine will come. It will bring with it, that rainbow we all so desperately want to see. At the end of that rainbow is the coveted Crystal Football we have grown so fond of. It has our fingerprints on it, and we'll get it back.