We'll Take It! Were the Gamecocks A Win We Weren't Supposed to Have?

Share All sharing options for: We'll Take It! Were the Gamecocks A Win We Weren't Supposed to Have? 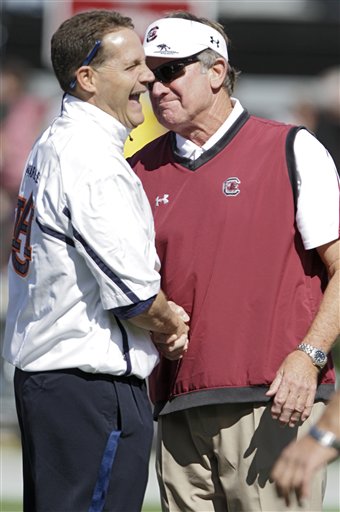 Spurrier asks Gene if he's seen the the shirtless pic of him from earlier this year.

Saturday was an interesting day for me. All along I knew I had a wedding to go to--yes, who in their right mind gets married during CFB season and expects any guests--but I never thought I'd miss any of the game. With a 1pm kickoff  wedding march, I thought for sure the logistics would work themselves out as CBS would take Bama-Florida for the 3:30 game and leave us for the later telecast by ESPN. Little did I know that CBS was doubling down and took both games, and the more attractive match up got held over for prime time. I guess none of the network heads had seen the way either team had played in the previous two weeks or we would have had the noon game.

With the ceremony and reception, it took us right up to kickoff, so naturally I found a TV and commandeered it, only to be followed by about ten other men looking for someone with natural leadership abilities like me and a good excuse to get out of doing the chicken dance (pun intended).Coincidentally, there were a few Auburn and Clemson alums there, so we had two groups to cheer us on. Did I mention they didn't have booze at the wedding? This was another contingency I had planned for, but with a dozen new friends, the fifth of Bourbon didn't last long. We caught the first quarter until the women shooed us away to go see off the bride and groom. I then went back to the hotel with my friends who were in from out of town, we changed, then hit a bar for the second half. I was happy because I got to yell at the TV in front of a bunch of friends and strangers and because it takes as little as something like that to actually make me happy.

We had talked a few weeks ago a game or two in about how the season would play out for us and I believe Jay mentioned that there might be one or two games we would win that we weren't supposed to, and maybe lose one or two the other way. Was the South Carolina victory one of those, or was something else at play here? It's hard to tell, On one hand, you have the #10 Gamecocks, but if you'd seen them against Navy and Vanderbilt, you'd know that something was amiss and they probably weren't deserving of such a lofty ranking. Everyone saw the SC-Georgia contest and became believers in the poultry, but they didn't catch the last two. If you only looked at Marcus Lattimore's stats you'd think they were a contender for the divisional title again based solely on that although there were definitely problems with Stephen Garcia and Alshon Jeffrey that a look beyond a casual glance could detect. Now the east race is wide open once more for the taking.

Don't get me wrong, that we were some juggernaught rolling in. We were 10-point dogs, but many people were taking Auburn and the points. That at least means you've got a chance for the upset. We knew from last year's tandem of games that we matched up well against them--especially on Lattimore, and we also knew that Gus Malzahn was absolutely not tipping his hand last week, so maybe we were bringing it. As it turns out, Gus did bring it--in the number of plays that we ran, if not points on the board. With our defense, us just controlling the time of possession is a game-changer. That we ran 80% more plays than SC is truly stunning.

Barrett Trottergot the win, but you can't say it was always pretty. My first thought was that he didn't look good at all, but after re-watching the game late Saturday night, I decided that it wasn't as bad as I thought. Although he was running for his life most of the day from Jadeveon Clowney and Melvin Ingram, it wasn't because the pass protection was that poor. There was hesitation there to throw it, and I'm not sure if it was because the receivers weren't getting open in time or that Trotter lacked confidence.

Yes, some of his throws were wounded ducks nowhere near the guy. Barrett can't throw on the run like we're used to Cam doing either. The two picks couldn't help his confidence at all, and you never know, maybe he's thinking in the back of his mind all the time about all the snaps that Kiehl Frazier gets now. Frazier poses a legitimate run threat and Malzahn seems committed to him doing two things: 1) running like a gazelle and 2) absolutely not passing the ball until the LSU and Alabama games, hoping that the defenses will sell out. Not likely for those two, but I like the chess match being played many moves ahead. Trotter showed that he could run--on plays clearly designed for him to do just that. Running for your life: not so good. Tucking it up the middle on a QB draw: highly effective in limited doses.

But nobody gets the game ball more so than our defense deserves. Never has a more maligned group tuned up their game so quick against such a big opponent.  Keep that up and we might see Roof for Prez signs out. Clearly his bunch does their best work when they're not out on the field for thirty-six plus a game, which is what we've averaging so far. We held SC to under 300 yards and most importantly, under 25 minutes of possession. We're going to need that same effort this week against Arkansas to keep their high-powered offense on the sidelines, and unless Roof and company pull the same Herculean feat, the only way that is going to happen is if the Hogs keep throwing TD bombs. And under Bobby Petrino, that's exactly what I'd expect them to try to do.

So did we steal one in Columbia? I'll let you decide. My mind won't be made up until the end of the year. Maybe we got lucky or maybe this team just found their groove. October is deadly this year. As an American patriot once said, "these are the times that try men's souls."And teams', too.