Share All sharing options for: Tigers Slam the Rebel Bears! 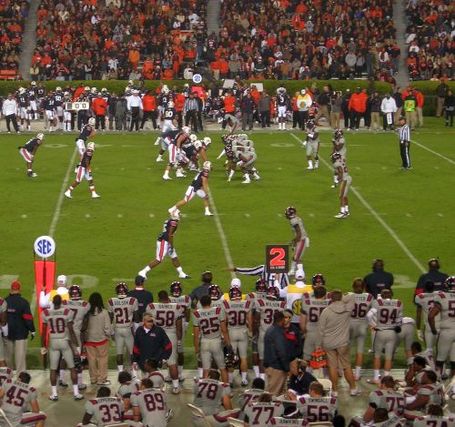 War Eagle, everybody! It's time now for the Acid Reign report, on Auburn's satisfying 41-23 win over Ole Miss. A bruised and battered Tiger team took care of business, surviving the Rebel onslaught, and imposing their will in the second half. It was the most complete game of the season for the Tigers, who go into their bye week on a good note. Auburn has survived perhaps the most brutal month of October in their history with a 3-2 record. The Tigers are bowl-eligible, and are now playing for a January 2 slot. In a year when Phil Steele and other pundits were picking Auburn to finish at the bottom of the SEC West, the Tigers can finish no worse than 4-4 in the league.

It was a brisk day on the Plains, with cobalt blue skies. As the sun set, the sabered crescent moon of Houston Nutt doom did appear over the scoreboard. I felt bad for the folks who showed up in shirt sleeves. With the game decided, folks left in droves. It wasn't so much disloyalty, I don't think. Rather, it was downright cold at the end of the game. The score was out of hand, the wind was blowing, and Houston Nutt was calling useless timeouts to prolong the beating. We stayed till the final whistle, but I don't fault those who didn't.

Sitting behind the Ole Miss bench illustrated a number of things for me. This was a discouraged bunch of players, who looked like they couldn't wait to get back on the bus and get the heaters going. The only source of real animation on that sideline was Nutt himself, pacing energetically up and down the sideline, barking into his headset. The Rebels don't believe they can win, pure and simple.

I know that the Old South tradition of Ole Miss is a big source of debate and raw nerves. I think the Ole Miss administration is missing the boat, and trying to please both sides of the debate. Instead, what we are seeing is a series of dysfunctional mixed messages. They yanked old Colonel Reb for a bear mascot, supposedly in order to be more politically correct. That's the 21st century for you. But then, they go with Confederate-themed gray uniforms. I say do, or don't. You either embrace the historical culture, or don't. Playing games doesn't please anyone. Civil War arguments aside, those unis looked like a bad laundry accident in person! 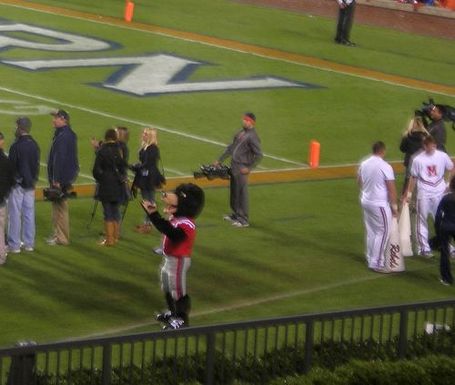 Oh, it's real? There really IS a Rebel Bear!

The first half was interesting for the Auburn defense. Linebackers and corners played pretty well. Eltoro Freeman has finally become the ferocious linebacker we've seen flashes of earlier. However, the D-line and safeties were not very good early on. Ends kept cheating inside, and losing contain. Repeatedly, safeties dove at empty air rather than running through tackles. Honestly, some members of the defense looked contact-weary. In the second half Ted Roof and the Auburn D adjusted. Auburn did a much better job of setting edges, and Rebel sweeps sputtered to a stop. Auburn pitched a second half shutout, till referee Penn Wagers forgot about the 10 second runoff rule on an offensive penalty, and let Ole Miss have a last second meaningless touchdown. Now we know. Late in a game if Wagers is reffing, you can get an extra timeout if you break the huddle with 13 guys.

On special teams, both punters looked like they were kicking a brick. Punts fluttered in the wind, and neither team got much distance, except for one by Ole Miss' Tyler Campbell. It was a rugby punt that Auburn did not field, and it rolled dead 48 yards later, at the Auburn 8 yard line. Cody Parkey had a great game, driving kicks deep into the end zone, and hitting all his place kicks. Auburn's kick return unit was a step away from breaking it on three separate occasions. 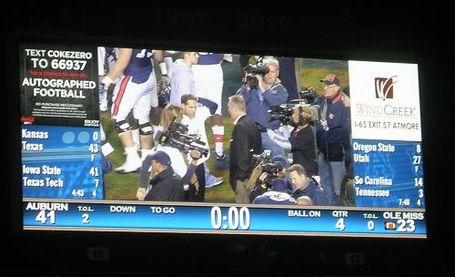 The scoreboard told the tale at the end.

"Houston, why'd ya keep calling timeout? It's cold out here!"

Defensive Line: D+. There were a lot of mistakes in alignment, and guys got pushed around at times. I think the LSU game took a toll on this unit. Ole Miss was 11th in the conference in rushing, but gashed the Tigers for 220 yards on the ground. I think tackle Jeffery Whitaker had the best game. He's starting to get a consistent push every down. He was easily the most visible Tiger lineman in the backfield.

Linebackers: B-. It was good to see aggressive tackling from Eltoro Freeman! He was all over the field making plays. Jawara White also had his moments, with 9 total tackles. Injuries have hit this unit hard. The only reserves that played were White and Harris Gaston. Points off on this unit for getting run over by Brandon Bolden. He gained 8.8 yards per carry. He'd have done a lot more damage if he wasn't on the sideline much of the game getting his ankles re-taped.

Secondary: B. Corners were very good in this one. There was nothing for Ole Miss throwing deep, regardless of who was covering. The longest Rebel completion was only 17 yards. There's some amazing depth in the secondary. I counted points off for some diving missed tackles early. Auburn's safeties rolled into the C and D gaps in the first half, dove at runners, and whiffed. In the second half, they did a much better job of getting wide, slowing the runner up, and waiting for help. Safety coverage was good, for the most part. All of Auburn's four sacks were coverage sacks, and another half dozen times Mackey was forced to throw the ball away, because no one was open.

Punting: D. I give a passing grade because the coverage was downfield in a hurry, and didn't allow a return. There was one interesting revelation from this game. It seems that both teams were attempting to throw/shove blockers into the returner. Can't hit the returner, so throw someone into him? I think the rules people will take a look at this during the off-season. On three punts, we did not manage a single 40 yarder, and averaged only 35.7 yards, with none killed inside the 20.

Punt Returns: C. Due to rugby punts and good Ole Miss coverage, we had no punt return yards. However, Bray only let one ball hit and roll. He came up with 1 zero yard return, and 3 fair catches. I'll take it.

Kick Returns: B+. The swagger was back on return blocking, after a harrowing, head-hunting experience last week against LSU. Craig Sanders knocked down a squibber, and there were good returns by McCalebb and Mason. Tigers averaged 22 yards on four returns, but that includes only a 5 yard return on the squibb. Take that out, and Auburn has a nice 27.6 yard average.

Place-kicking: A-. Only 3 of Cody Parkey's kicks were returned, but those went for a 23.6 yard average. Parkey had 5 more touchbacks in this one, but with the breeze, he had to lower his trajectory to do it. When the low liners don't make the end zone, there's more room for returners. Parkey easily hit all of his kicks for points.

Offensive Line: B-. It was a much improved performance compared to the LSU game. A. J. Greene gave up one sack against a reserve, but part of that may have been Clint Moseley taking too deep a drop. The play lost 14 yards, and you're not supposed to be that far back, even on a 7-step drop. Chad Slade and John Sullen were much more in tune on those guard pulls, opening cracks for Michael Dyer to slip through. Auburn's recognition and protection against a blitz-happy Rebel front seven was pretty good. In the second half, the Auburn O-line really wore the Rebels down.

Running Backs: B. Points off on the first two lost fumbles of the year. Auburn was really rolling when those two balls came out, and it allowed the Ole Miss offense to keep the Auburn defense out there a long time in the second quarter. Also, the evil turf gremlins made a reappearance. Several times Auburn runners tripped over yardlines, and went down without being touched. Aside from those gripes, Auburn runners ran hard. On one occasion, Michael Dyer dragged a host of Rebel tacklers for about 8 yards. Phillip Lutzenkirchen made a number of great blocks on the edges. The most amazing play of the day for this unit wasn't a run. It was a crazy one handed reception by Lutzenkirchen in the 4th quarter. Lutz snagged that thing like a Nerf ball, switched hands while diving, and spiked it inside the pylon. That was a Sportscenter-worthy highlight!

Receivers: A. There were a few missed blocks, but for the first time all year, I don't think I saw a dropped ball. It's amazing what a half-speed Emory Blake means to this unit! I was pleased to see a lot of snaps for freshman Jaylon Denson. He did not get a ball thrown to him, but he caused problems for folks in the Ole Miss secondary. Denson is a big receiver, reminiscent of Anthony Mix a few years ago.

Quarterback: B+. Clint Moseley played most of the game, and mostly handed the ball off. When asked to throw, he delivered. Moseley threw four touchdowns in the game, and did not turn the ball over. He hit 12 of 15 passes for a gaudy 10.6 yards per pass average. There were just a few throws that weren't very pretty, including the wobbly score to Blake. It counted six points just the same, but it was fortunate there was no defender around.

A week after a disastrous loss to LSU, Auburn regrouped, took care of business, and rolled over the Rebels. The Tigers are picking up steam for the last quarter of the season. A bye week will allow the Tigers to recuperate, evaluate, and do some more teaching. A rested Tiger squad should be able to go into Athens and play well. Homecoming against Samford should be a good tune up, and the Tigers could go into the Iron Bowl with an 8-3 record and a lot of confidence. The Tigers are at home in that one, and will get after the Tide.

Kudos to coach Gene Chizik and his staff. True to form, they've kept this young team on a even keel, and I'd argue that a 41-23 win over a motivated Rebel squad is a great answer for the big loss the week before. I have confidence that this team will keep doing the right things, and we'll see a pretty tough squad down the stretch. War Eagle!