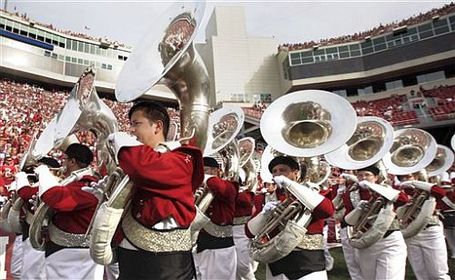 War Eagle, everybody! It's Razorback week once again. This week somehow seems to create worry for the Auburn defense, year in and year out. Whether Arkansas is cruising towards a division title, or headed for the cellar, history has taught us to worry about how many points Auburn will give up to them. Auburn has a winning record against the Razorbacks since they joined the SEC (10-8-1), but the points battle between the two is nearly even at 465-460. It's interesting to note that while Auburn has a winning record against every SEC West opponent since the division split in 1992, some of those point totals favor the opposition.

As the above table illustrates, Arkansas is almost 4 points per game better than anyone else in the division in scoring points against Auburn. That's a worry this year too, with a prolific Razorback offense. Since Bobby Petrino took the helm in Fayetteville, the Razorbacks have scored 25, 44 and 43 points against Auburn. The game is in Fayetteville, where Auburn holds a 5-3 record since 1992. In games played in Fayetteville, the average score has been Auburn 20.0, Arkansas 23.6. Auburn has tended to win close games there, but the losses have been blowouts: 34-10 in 1999, 42-17 in 2001, and 44-23 in 2009.

While I'm having fun making tables, here's Auburn's record against SEC West Opponents. Considering that we've gone through Ramsey-gate, the Bowden exit, and the Tuberville/Franklin fiasco, it's pretty amazing that no SEC West team has a winning record against Auburn!

Of course Auburn could be drummed out of the SEC West any day now, if the Missouri rumors pan out. The Tigers would be joining a division where they are 5-9 against Florida, and 9-9-1 against Georgia. Would that be worth trading the two Mississippi schools for Kentucky and Vandy?

Speaking of Missouri, ESPN is at it again with the "sources." Apparently, a "source familiar with the situation" told ESPN that the school administrators would have rather had a Big Ten invite, and was looking at the SEC as some sort of "second choice." Sounds to me like another ESPN hit piece. Who was it, ESPN? An administrator? A booster? Or just a guess by one of your writers? Sheeesh. Way to throw some cold water on an already tenuous situation. It's pretty well known that a lot of "southern traditionalists" don't think Missouri is "southern" enough. They'd prefer a more local team like Georgia Tech, Clemson or FSU. Now ESPN is tossing around "sloppy seconds" rumors. Great. Just what we need. Leave it to ESPN to poison the well.

I'm ready for some more football! The showdown with Arkansas is set for 6:00 PM Central Time, on ESPN. We'll be here with an open thread, so be sure to drop by and join the fun! The Auburn Tigers will continue growing and improving against the best offense left on the schedule. War Eagle! See you Saturday!