If it's a passing down in scoring territory, The Dash would cover Lutzenkirchen with two defenders, three student managers and four members of the marching band. The Dash would be on him so hard, local authorities could file stalking charges. The Dash would invite any other player with an "AU" on his helmet to get open, but would not be beaten by Philip Lutzenkirchen.

You can read the post in it's entirety HERE.

It is with the saddest of hearts that I must let you know THIS. Andy Bitter has been one of the best beat hacks(one last jab) to ever cover the Auburn football team. I really only follow four other writers, that do not post for this blog, on a regular basis, Andy is one of them, and will be missed. I have been checking his posts as many as 10 times a day for any new content. He has been insightful, and comprehensive while covering Auburn, so the Hokies fans will be getting a great guy, that knows his craft.

I personally want to wish Andy the best in his future endeavors covering the Virginia Tech team. His wife is thrilled, so Mr. Bitter is good on all accounts. Thanks Andy, it's been a great ride.

Auburn's offensive line really looked better last week, and some say it will help down the road. Here is what Jared Cooper thinks....

"When you pick up yards every time you run the same play and they know what you’re running and you’re still getting positive yards every time, it does a ton for your confidence."

We certainly don't need this....

I hope all the hoopla, is much ado about nothing. Seems Jeff Holland, Father of Jake Holland, Auburn's middle linebacker, has paid for some power chips, and gave them to his son. Jake then proceeded to share with his team mates prior to the USCe win.

I do not understand why everyone is not fully educated on the dangers involved with this kind of thing. Always, check with the compliance department first! If the compliance people give it a thumbs up, then give it to your child athlete, not before you get approval.

What is so hard to understand about that?

Either Sakerlina's "D" is getting weaker, or Auburn is getting better, we will know soon enough. It is my opinion that Auburn is improving. Maybe not as fast as some would like, but I have seen improvement.

One other thought on this teams early struggles. Last season we saw some scary performances out of Auburn on both sides of the ball, especially early in the season. Discount the Iron Bowl, and Auburn improved each week, and put its two best efforts in during the last two games. A total shellacking of USCe and holding the most prolific offense in all of FBS, to just 19 points. We can all agree that those two defensive performances were tremendous. That just may be the key this season. Keep getting better each game.

Next season will be really good, as long as this team learns to play each game, as if that's all that matters. Although I am not one to look that far ahead during the October stretch, you can't help but feel giddy at those prospects as an Auburn fan.

When the cast members of the TV show GLEE do a photo shoot, I usually won't even give it a second thought. In this case however, I couldn't help but think of our dear friend Jay Coulter, and his recent trip to the "butt doctor" 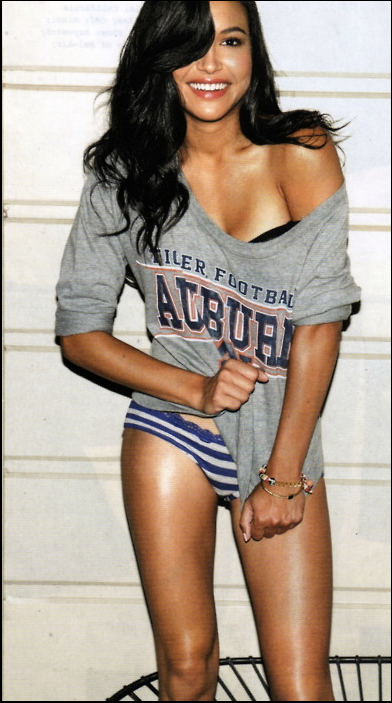 Yea! It's Arkansas week. Makes it all worth while to know that in Arkansas, they enjoy life to the fullest. Notice the "Need Volunteers" link? Yeah, it's difficult to find good free help these days.

While there are several good things to like about our friends in and from Arkansas, there are some compelling reasons for DISTASTE.

I look for a steady diet of read option, and big plays offensively. Arky's "D" is not thought of as SEC caliber just yet, and Mad Dr. Gustav will exploit every single weakness any team has.

I'll refer to the comment made by the Colonel yesterday. We must have much improved play from our linebackers this week, or it will be a long silent flight home for our boys.

Here's to hoping for a win, and a solid performance from our Tigers. Most importantly, wishes for our team to escape injury, and assimilation to the Borg. Resistance may be futile, but it is necessary.