Share All sharing options for: Tigers Come Apart in Fayetteville. 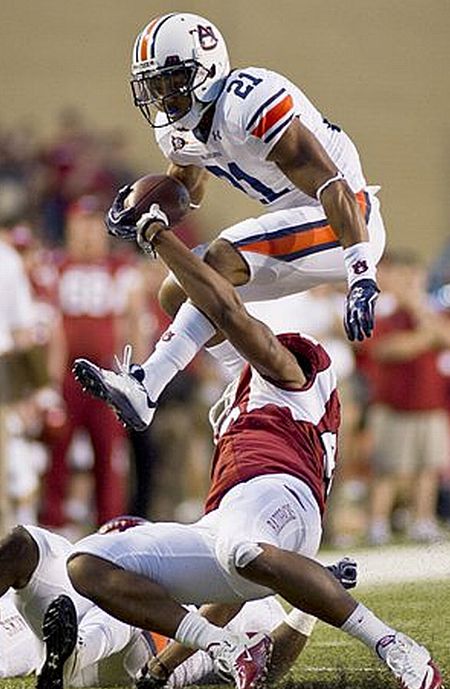 War Eagle, everybody. It's time now for the Acid Reign report on Auburn's 38-14 loss to Arkansas. The Tigers took the field, and took home another blow-out loss from the Razorbacks. Looking at Auburn's schedule before the season, I think few folks picked Auburn to win this game. The frustrating thing in this one is that Tiger miscues had as much to do with this loss as Razorback play did. I saw two pretty evenly matched teams out there Saturday. However, one team did a better job of throwing, catching, avoiding turnovers and costly penalties.

In this game, Auburn went from being rarely penalized, to racking up 11 flags for 105 yards. It takes a lot of sloppy play to reach 100 penalty yards. At least half of those penalties killed drives. One can move the ball down the field with a 3-4 yard a carry running game, but it won't work on 1st and 20. Three interceptions also hurt badly. When the starting quarterback struggles, everyone loves the backup. Yesterday, every downfield pass the backup threw was intercepted. Give Coach Chizik and Malzhan credit. They aren't fools. They do know each quarterback's strengths and weaknesses. It's rare to lose a game when you rack up 291 rushing yards with no fumbles, but Auburn did it, losing by 24 points.

The one certainty from this offense is that the passing game must improve. Aside from Travante Stallworth's reception on the flea-flicker (which was a horrible throw, should have been a score), Auburn's wide receivers combined for just 3 catches for 21 yards. There were more dropped balls than receptions. Barrett Trotter completed only 6 passes out of 19 attempts. Reviewing the tape, I counted seven dropped passes, and 6 balls that were incomplete because of bad throws. If we hold onto 4 of those 7 drops, Trotter hits 10 of 19. Catch 'em all, and he's 13 of 19. Trotter's lone interception was a good throw that bounced off DeAngelo Benton, who led the team in dropped passes. The o-line pretty much did their part in protection Saturday. Arkansas was credited with only one sack, and one quarterback hurry. After the first quarter, Arkansas rolled a safety down, and played a mix of cover-3 and cover-one. You should be able to run fades and smash routes all day on that coverage. Auburn must exploit packed-in defenses better in the future.

Some folks would argue that giving up 438 yards is way too much in the SEC, and it's true. Arkansas routinely puts up more than that. The Razorbacks came into the game averaging 471 yards per game. Auburn held 'em below their average. Line play has improved for the Tigers by leaps and bounds the past two weeks. It isn't perfect, as we saw Corey Lemonier lose contain on a 92 yard scoring run, but we're getting pressure, and stopping the run most of the time. Take away Adam's 92 yarder, and Auburn held Green and Johnson to 89 yards on 28 carries. That's only 3.1 yards a pop. Matched up on one of the toughest receiving corps in the game, the young Auburn secondary limited big plays, giving up only 7.2 yards per pass. Arkansas came into the game averaging 8.7. It's the first time we've held an Arkansas passing attack under 300 yards since Houston Nutt was coaching there. All in all, the defense is getting better and better.

Tiger fans had to enjoy the special teams play once again this week. The strong legs of Cody Parkey and Steven Clark have been the best surprise of this fall. Auburn's coverage teams were so stifling that Arkansas managed only 11 return yards on kicking downs. Steven Clark punted nine times, and the Razorbacks could return none of them. 6 of the 9 punts were killed inside the 20.

Defensive Line: C+. This unit continues to get stronger, particularly in the middle. They make mistakes, sometimes running themselves out of their gap, but the were tough against the Razorbacks for the most part. The line totaled 3.5 tackles for loss, and two fumbles forced. They went toe to toe with a tough Razorback line, and for the most part won their battles.

Linebackers: C+. First off, I'll say this: Eltoro Freeman really popped some pads in this one. Razorback runners no doubt woke up sore and stiff this morning. It was good to see Freeman, Bates and Evans among the top five tacklers, and that's the way it should be on defense. Nice to see those tackles, but still too many of them are being made hanging on and falling backwards. While run fits have improved dramatically of late, the linebackers are no help at all in pass coverage. We continue to be very vulnerable to screens and shallow crossing routes.

Secondary: B+. This was a pretty fine job against a very good receiving unit. It's been a long time since Auburn had multiple cover corners who can stay with their man and make plays on the ball. Thorpe and McNeal have the range and are doing a good job of keeping opposing quarterbacks from throwing the ball down the field. This game, you did have Razorback receivers open by a step or two underneath, but we really didn't see any serious coverage busts downfield. You have to remember that a properly constructed short passing game with crosses and button-hooks is nearly impossible to stop. Auburn did a really fine job of slowing this dangerous attack down, and limiting big plays.

Punting: A. Clark's first attempt was an 11 yard shank, but that did not hurt Auburn, as the ensuing drive resulted in a clanked field goal attempt. Thereafter, Clark was magnificent! Time and time again he hit towering mortar shells that Arkansas had no hope of returning. Six of nine punts were downed inside the 20, with no touchbacks. With the shank, Clark had a 40 yard average. Pulling it out, Clark slammed 'em for 43.6 yards.

Punt Returns: C. We were only able to return 3 of Dylan Breeding's 7 punts. That was a pretty strong-legged opponent we were working against. Quan Bray returned those three for a total of 12 yards. Blocking is poor on these things. Bray is making good decisions, and is sure-handed. After the last two years of dropping punts on the ground, we'll take it. Points off on DeAngelo Benton getting hit by the ball on one punt. The officials saved us by ruling that he was blocked into it. It could have just as easily been ruled a live ball.

Kick Returns: B. We only had two shots at this, because Zach Hocker whacked five of seven kickoffs deep into the end zone. While he shows nearly as strong a leg as Parkey does, several of those kickoffs were from midfield due to Auburn penalties. Points off on Quan Bray mishandling one deal deep in the end zone. Didn't seem to realize the ball was live. It resulted in a touchback. Tre Mason got two returns, and cracked them out for a good 26.5 yard average. Mason hits the hole hard, reminding me of Brad Lester, only Mason is bigger and faster. He crashed into the coverage so hard both times, I was expecting to see helmets and limbs flying out of the pile!

Place-kicking: A. Cody Parkey had one really short kickoff that only reached the 18, but I think the wind was pretty strong in his face at the time, and he squibbed it on purpose. Arkansas only managed an 11 yard return against Auburn's strong coverage. Parkey's other two kicks went deep into the end zone. Parkey was perfect on two extra points.

Offensive Line: C+. The blocking wasn't too bad for the most part. You have to remember that Arkansas was camping a lot of folks in the box, and you can't block more than five guys with five linemen. Hats off to Chad Slade. He's moved around all over the place this year, yesterday taking Jared Cooper's spot after an injury. This grade is reduced for 4 holding penalties, and one false start. When you rush for 291 yards and only give up 1 sack, the line is doing something right.

Running Backs: B-. It was another solid day running the ball for Dyer, McCalebb and Mason. The H-backs also did ok on lead blocks. What was startling to me was how often we tried to run with no blockers, and all the skill players split out wide. It didn't fool Arkansas, and those rarely worked. Where we lose points here is at H-Back. Phillip Lutzenkirchen had an uncharacteristically butter-fingered day with two dropped balls, and he added a drive-killing holding penalty.

Receivers: D-. Passing grade here only because Travante Stallworth did come back and make the grab on the horribly thrown flea-flicker. We didn't get much separation, make plays on the ball, or even catch passes that hit the numbers. The unit also went downhill blocking. Emory Blake, get well soon, please?

Quarterback: D+. I give a grade this good only because of Khiel Frazier's tough wildcat running. We saw why the coaches aren't keen on Frazier throwing the ball, as two of four were picked off. Barrett Trotter is having a rough time in the passing game. In his defense, he was placed in long yardage situations repeatedly, with a very spotty receiving corps. About a third of his throws were way off the mark.

Congratulations to the Razorbacks on their victory. Coach Petrino deserves credit for the way this team is molded. They've handled some difficult injury situations this year, and their offense is fearsome year after year. I was especially impressed with kicker Zach Hocker and punter Dylan Breeding. Those are a couple of quality football players.

I felt like Auburn would show improvement at times this year, and at times stumble backward. The defense is improving. The passing game has had a two-week stumble. I think we'll see improvement there before it's over, too. Main thing is to keep working, and keep a good attitude. Auburn has a winnable game ahead at home against the Gators next week.

Florida is suffering a lot of the same woes as Auburn is. They are young in the front seven. Their passing game is sputtering due to injuries. Against LSU last week, we saw offensive coordinator Charley Weis abandon the pro-style offense, and start running the old Meyer/Addazio spread option. They are really struggling to move the ball consistently. Several things work in Auburn's favor. The game is in Auburn. Auburn is coming off physical games against South Carolina and Arkansas. However, that's nothing like what Florida has endured. They've played Alabama and LSU in back to back weeks. They'll come into Jordan Hare Stadium battered and bruised. Finally, I like Auburn's depth situation a little better than Florida's. Not only is the Florida passing game in disarray, but they are struggling in the running game. Rainey and Demps are both battling injuries.

Auburn has a good chance to get back on the winning track and improve against Florida, but the penalties and dropped balls must stop. Here's hoping for a great atmosphere to welcome the Gators. With a win against the Gators, Auburn will almost certainly finish the season bowl-eligible. It will be time then to start working towards a better bowl. And who knows? One SEC loss does not knock Auburn out of Western Division consideration. LSU and Alabama still have to play Auburn, and anything can happen in college football! War Eagle! Let's continue to support and cheer our Tigers on, and remember to enjoy the little things, like the increasing physical play of the defense this week.