Share All sharing options for: Rubber Match in Athens! 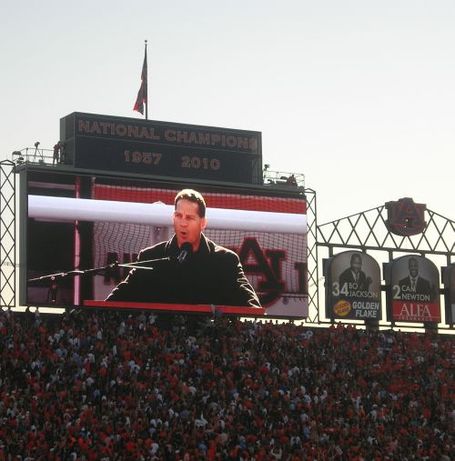 Can Coach Chizik lead Auburn to victory once again?

War Eagle, everybody! It's Georgia week once again. The 12-team SEC is drawing to a close after a 20 year era. In that era, Auburn has beaten Georgia 9 times, and lost to the dawgs 9 times, with a 23 all tie in 1994. This game will determine who wins the series. In the 20 year 12 team era, of all SEC teams, only Florida has a winning record against the Tigers, winning 9 of 15. Georgia can become the second team to hand Auburn a losing record with a win Saturday in Athens. Can the Tigers turn the tables on the Bulldogs, and clinch a victory in the series?

Auburn and LSU finished the era with ten wins apiece against each other. Even if the Tide wins this year's Iron Bowl, they will finish the era with a losing 9-11 record against the Tigers. Against all other SEC opponents, Auburn has a winning record over that era. The Tigers will also finish with the best SEC record in the Western Division, regardless of what happens down the stretch this year. That's a pretty remarkable accomplishment, considering all the turmoil in the past 20 years. Ramseygate. Bowden ouster. Jetgate. Tuberville's resignation. Through it all, Auburn was better than the rest of the division!

There are always those cliched "keys to the game" we all like to number. "Turnovers." "Stop the run." Well, I think the key to this matchup will be the Auburn offensive line. This unit has had real problems communicating in noisy environments, and handling big linemen. Sanford Stadium will be loud Saturday. If Auburn can't block the massive Kwame Gathers or the speedy Jarvis Jones, Auburn will struggle, and probably won't be able to score enough points. Auburn's defense has improved bit by bit this season, but still needs help from the offense. Georgia will move and put up 20-25 points in this one, even without help.

This game promises to be a chilly one, for an SEC match. It plays at 3:30 PM Eastern time, on CBS, as does the Iron Bowl in two weeks. We'll have our usual open thread up Saturday morning. I will not be available for play-by-play, as I'm planning to attend this one in person in Athens. Stand by for some shots from the enemy camp to be posted next week! Hopefully, it will be a happy trip I report on. Grades may be late-ish, due to travel.

The week in college football, after the jump!

As has become the norm in recent years, it was another tumultuous week off the field in college football. The SEC finally made it official, and welcomed the University of Missouri to the league, likely to play in the SEC Eastern Division. I'm hearing that the Auburn administration is still battling for a chance to move to the East, but the cards are stacked against them.

Regardless of how the divisions end up divided, every school's schedule will change next season. With seven teams in each division, and the league sticking to 8 league games, each team will have to drop one rotating game. Each team would play its 6 division rivals, 1 permanent opponent in the other division, and one rotating game. That makes for LONG gap between playing other division rivals. Auburn might not see Florida again for a decade.

I've probably got little to add to the horrifying story unfolding at Penn State, that hasn't already been said. A year ago, if you were asked to name a pair of coaches who epitomize old-school virtue and decency, who would you have selected? Joe Paterno and Jim Tressel? In the past year, it was revealed that Tressell's sweater vests and 1950s demeanor were just a cover for ignoring widespread cheating and misbehavior. This past week we have learned that Paterno and the whole chain of command at Penn State are accused of sheltering a child-molester for over a decade.

I see no way coach Paterno could have survived this and continued to coach. The message to recruits is clear. Joe's priority is not the children, as he has often claimed. He's more invested in keeping the school name clean, and covering for a long-time assistant, regardless of what heinous things that assistant might do. How could anyone entrust their child to the Penn State program, now? Can Penn State even be trusted to teach ethics, at this point?

It remains to be seen how badly this turn of events will color Paterno's legacy. One horrendous decision might well overshadow six decades of good work on behalf of college athletics. Everyone involved with this coverup should be ashamed. Not one person in the whole scandal lifted a finger to protect the children. What's more important, the institution of learning, or the children? I'm betting that Penn State is not the only education hierarchy in this nation that falls on the wrong side of that equation.