Share All sharing options for: Bulldogs Chomp the Tigers. 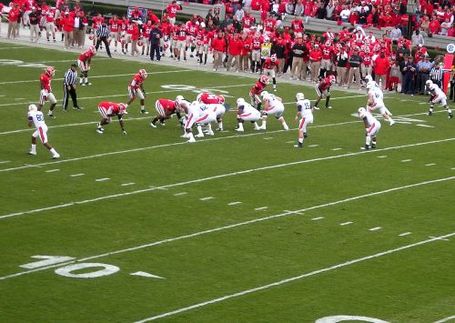 Auburn could not get much done in Athens.

War Eagle, everybody. It's time now for the Acid Reign report on Auburn's 45-7 blowout loss to the Georgia Bulldogs. It was as bad an Auburn loss as I have ever witnessed. As the game wore on, Auburn was manhandled in every phase. I kept looking for Auburn to fight back, but it never happened. In the second half, Georgia was able to simply line up and run at will, even with nine Tiger defenders in the box. The team looked flat-out awful. There's really no way to sugar-coat it.

It was my first ever visit to Athens, Georgia. I was a bit apprehensive about it, given all the furor over the hostilities at the end of last year's Bulldog game. I needn't have been. The Bulldog fans were great. They welcomed us, handed out food and drink to us, and refused to take any money. I heard not a single insult the whole time. It was quite similar to how Auburn fans treat visitors to Jordan Hare. It was great to be able to discuss football in a friendly manner. I can tell you this: none of the Bulldogs I spoke with had any idea of what was coming in the stadium. 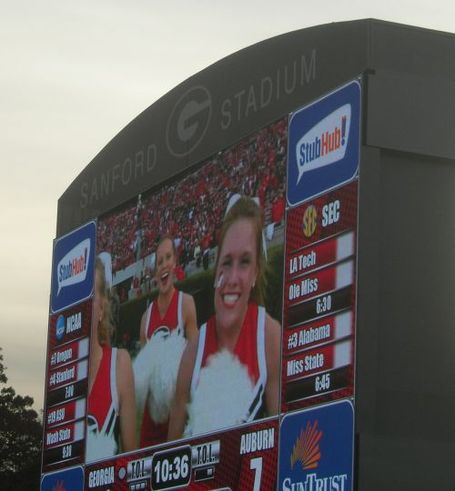 Georgia took on the Auburn defense, drove 70 yards to open the game, and never slowed down. Only two Tiger defenders looked like they belonged at this level of competition, Eltoro Freeman and Corey Lemonier. Even so, both of those guys had their issues also. The rest of the defense was whipped, run over, and outmaneuvered. Clearly, we did not work on breaking on underthrown, bloopy balls in the secondary the past two weeks.

On special teams, Steven Clark had a solid day punting the football, with seven unreturnable towering shots for a 41 yard average. Cody Parkey nailed Auburn's only extra point. The majority of Auburn's special teams action was on numerous kick returns. We're not blocking those very well, and the Auburn return men who found lanes earlier in the season are now getting blown up after about 15-20 yards, often by the first man down the field.

I'm still a believer in the Malzhan offense, but it cannot work when a tackle or center misses a block. On the typical running play, Auburn leaves one lineman unblocked, and tries to read him. Those other three linemen are expected to post up their guy. It ain't happening! When two or three D-linemen get free in the backfield, the play is doomed. Pass protection is not great, either. Guys are turning the corner on us, and shoving the interior line back into the QB. Also, we miss Eric Smith and Kodi Burns horribly. We can plug Phillip Lutzenkirchen into one spot or the other, but we've got no one else who's an effective blocker. It's a total waste to put Quindarius Carr, Travante Stallworth and Jay Wisner flanked out to the wide side. They get a single defender who immediately comes off and plays the run. We never even look to go out that way with the ball. Folks say that no one but Emory Blake can get open. That's simply not true. Carr was running around by himself on most plays, and we never gave him a look. We'd rather run a screen to the short side to Blake, while 5 or more Bulldog pass defenders are stacked up waiting for it.

Defensive Line: F. Occasionally Corey Lemonier got pressure on Aaron Murray, and he did force two fumbles. Generally, though, we were pushed backward up front across the board, including Lemonier. It was the worst mismatch of the season. The only thing that will fix our line problems is time and a year of off-season work. We have talented guys, but the all-underclassmen unit is not strong enough this season.

Linebackers: D-. Eltoro Freeman flew to the ball, even if he didn't always have his assignment right. This unit gets a passing grade for that. Neither one of our outside guys can get off a tight end or fullback block. We're really hurting at linebacker, and I'm not sure that we even have any long-term answers here.

Secondary: D. Auburn has corners who can run with anybody, and for the most part they stayed with Georgia receivers well. What they did not do is look for the ball, or make plays on it. Georgia's Murray put the ball up for grabs, and Auburn's guys could not do anything with it. UGA receivers went and got those things. On top of that, often the DB would lose the receiver after the catch. I saw one ball that was tipped away on a throw down the middle. Matching up a safety man to man on tight ends Charles and Bennett was an utter failure.

Punting: B. Had a few shorter ones, and a few longer ones. All were really high, and Georgia could do nothing but fair catch them. We were glad to see Steven Clark return to his earlier season form.

Punt Returns: I. We only forced one Georgia punt, and it was shanked out of bounds for only 17 yards. There were no returns.

Kick Returns: C. We've gotten worse and worse blocking these as the season has progressed. Luckily, all of the return men have good speed, and we're still managing 20 yards on the average. Unfortunately, we're not slowing the coverage down, and are seeing tremendous collisions at the end of the runs.

Place-kicking: C+. Cody Parkey started the game with a short kickoff, and UGA started at their own 30 as a result. The only other action for this unit was a single successful extra point, and another kickoff that didn't reach the end zone.

Offensive Line: F. Auburn could not handle big John Jenkins up front, even with a double team block. And when we double teamed him, it left a linebacker to run free through the gap. Both tackles also got whipped pretty badly by guys turning the corner on them in pass protection. When Auburn did pull a guard, typically the guard found no one to block. Some of this unit's problems will be fixed next season when the two freshman starters go through off-season workouts. Where we are going to come up with a pair of starting tackles, I have no clue. Mosley and Greene both graduate after this season.

Running Backs: D. These guys dropped balls on the ground, missed blocks and didn't look inspired running it for the most part. It's hard trying to take on hordes of unblocked Bulldogs.

Receivers: C. These guys caught it when thrown to them (with one Bray exception on a quick screen), and generally got open. They did not block well at all. It was nice to see that flea-flicker deal to Uzomah finally work for a score. Unfortunately, that's always what we run when he enters the game. I'd expect Saban and Smart to prepare for that.

Quarterback: D. I'll give a passing grade due to the first quarter. After the Bacarri Rambo pick-six, it looked like Clint Moseley lost his confidence. I don't know who to blame for the huge pass distribution problem. Namely, we won't throw to anyone but Lutz and Blake. Don't know why. Is it play-calling? Is it Moseley's fault? We basically played the passing game on one third of the field. Two guys were split out to the wide side with tons of green grass and only two defenders, and we never went that way. Instead, we were always throwing short to a clogged area. It looked like Tony Franklin ball.

In the end, this game was lost because our front seven was unable to stop Georgia. Bulldog schemes weren't fancy, and they didn't have to be. We are simply not physical enough against the better SEC teams. As coach Chizik said, there's nothing else to do but go back to work. War Eagle, everybody. It's great to be an Auburn Tiger. 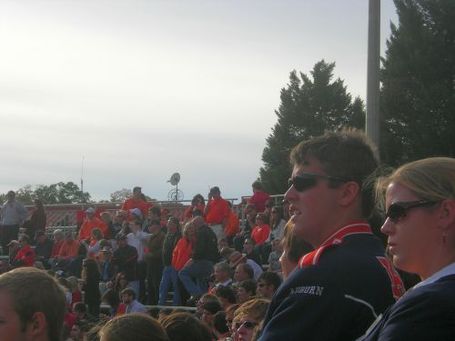 The Auburn faithful looked on in shock and disgust.